It's Beginning to Look...

Tonight's event was Winter's Eve at Lincoln Square. The Winter's Eve website claims to be NYC's Largest Holiday Festival and was spread out on Broadway from 58th to 68th streets. This fair involved outdoor food booths, street performances, free offerings at stores in the area, activities for kids (make-your-own elf hats!), and a 25-foot balsam fir tree, which was lit at the beginning of the festival. 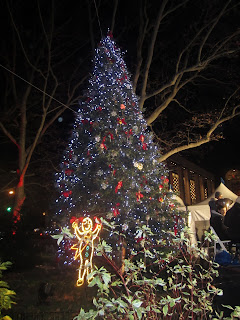 The food booths were pretty cool and gave inexpensive samplings from some of the best restaurants in the city, A Voce (a favorite of my foodie friend, Caitlin), Landmarc (where my friend from work saw Ben Affleck, Jennifer Garner, and the girls one day for brunch), & Atlantic Grill, to name a few. My friend who I roped into coming with me purchased a $4 spicy tuna roll from Bar Masa, an offshoot of Masa, which he claims is the most expensive restaurant in the city, at $400 a meal. For *my* dinner, I chose a a $1 red velvet cupcake (are you really surprised) from Dizzy Club Coca Cola, which is a jazz club in Lincoln Center. I could have waited a few blocks to get Magnolia, but I did not think of this beforehand, plus their cupcakes ended up being $3.25. There was also "a sculptor, sculpting a sculpture" (quote, unquote, woman behind me). 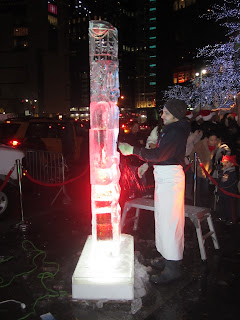 Most of the big stores along that stretch of Broadway had cookies, hot chocolate, and other goodies to give away while shoppers spent away. After a while we wandered into Raymour & Flanigan because we heard they were giving out free wine and cheese.  The only problem with that is when you sit down on a couch to drink your free glass(es... if we are being honest) of wine, the salespeople then swarm and think you are actually in the market for a $3000 couch. After being harassed there for a while, we left and ran into some creepy puppetry performers and decided it was probably time to call it a night. 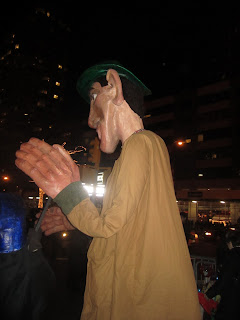 I'm a little nervous about tomorrow's plans which involve watching the Rockefeller Center Tree Lighting. Thousands of people (and some rain) are expected. But if I can't get close enough to catch the lighting, luckily I can just walk right home instead. Wish me luck!