This morning, I found an article in the NY Times that made me decide to reminisce about my trip to Coney Island this past summer. "Coney Island Loses Longtime Boardwalk Vendors" discusses how nine businesses on the Coney Island boardwalk, some that could be considered staples, are being forced to shut down. On our trip, we had been to Beer Island, taken pictures of Paul's Daughter (in honor of our friend Paul), and made fun of Shoot the Freak (yes, this is actually a game on the boardwalk which involves a man running around a course with a shield and mask while children shoot paintballs at him...) As Paul sarcastically said when I told him the news, "Say it isn't so. Shocking that Shoot the Freak wasn't the biggest drawing card of Coney Island, you know, because it was so awesome and not weird at all."


I went to Coney Island with Kara, Lindsay, Harrison, and Paul in August. This had been on my to-do list since last summer so I was super-excited to finally be able to go on a beautiful Saturday. We met at 14th around noon. Little did we know when we got on the subway toward Coney Island that we would be on there for basically an hour. When we finally got there, the first thing we had to do was get Nathan's Famous Hot Dogs. The line (again, these lines!) was really slow, but (again!) the food was so worth the wait.  I think I'm beginning to understand the reasons for these lines... 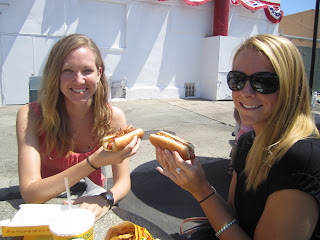 Two of the rides I wanted to go on most are also the two oldest rides on Coney Island: The Cyclone and the Wonder Wheel. These are both actually designated as NYC Landmarks and listed in the National Register of Historical Places. The Wonder Wheel is a Ferris wheel that has been open since 1920. There are regular cars on the outside and there are moving cars on the inside. The moving cars swing back and forth and forward (as if you are outside the limits of the Ferris wheel) while the Ferris wheel moves around. I liked this a lot, especially because of the view of the park you get from the top of the wheel: 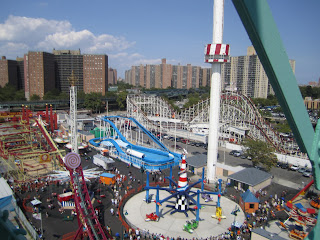 The Cyclone is one of the oldest wooden roller coasters still in operation and pretty much the scariest ride I've ever been on. Maybe it's me getting old, but I really felt in danger the entire time. From the moment it started until it stopped two minutes later, all I kept repeating was "Oh my God! I hate this! Why are we on this! Oh my God! I want it to stop!" with various curses scattered throughout. But people have been riding this roller coaster since 1927, so I guess, for some reason, this feeling that you are going to fall through the rickety wooden planks or keep going straight right off the tracks on these fast turns is desirable to some. 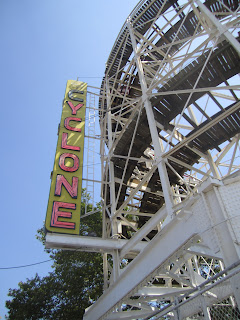 I will pass on this ride next time...I'm actually reliving my ride right now in my head and wondering if I'll be able to fall asleep after all this. Wish me luck...