You're Such a Waffler.

I suppose my obsession with food carts has been made public by this point. A particular food truck I follow on Twitter (@waffletruck aka Wafels & Dinges) has been tempting me for a few weeks now. So when my roomie texted me to tell me that there was a truck hanging out right near our apartment, I decided I would go today. But while checking out the website, I saw that it was only supposed to be there until 5, but that another truck would be on 6th and 21st until 10 pm. I took the E train up from work with my friend Jon and we both got a delightful little treat - even though the truck was parked at 7th and 21st instead. Check here for locations as it changes daily. 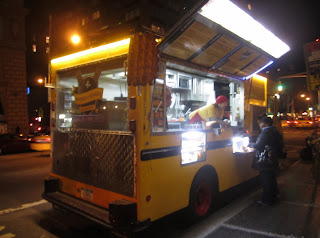 Jon went classic and ordered a sweet liége wafel with dinges (toppings) of dulce de leche and walnuts. I decided to go a little obscure with my order "de bacon + syrup wafel"  - advertised as "Scandalous and pretty much illegal in Belgium. Awesome in NYC" - with dinges of peanut butter, bananas, syrup, and whipped cream. Jon's wafel came out right away but we had to wait for mine to come out. And then "something went wrong" and mine had to be started all over. We ordered hot Belgian cocoa while we waited - which was amazing - and were rewarded for waiting with free Belgian cookies. My wafel finally was ready and was incredible. I didn't really know what the bacon would taste like with the sweetness, and didn't know if the peanut butter and banana would be overkill or not, but it was perfect! Katie - you would LOVE it and you should come get one with me the next time you are in NYC - in the meantime, now that I know what bacon + sugar tastes like, I am now willing to try your bacon brownies. 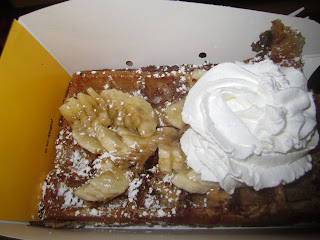 My dinner (what? It had protein...) ended up being so filling that I walked the 2.1 miles home. And yes, I did google map it.