Gettin' a Lil Tired of your Broken Promises, Promises

One of the things on my 26 things to do before I turn 26 list is "see ten Broadway shows".  It's really more "take advantage of your proximity to the Theatre District" but I felt like I needed to quantify that item before I could cross it off.  This year, I have seen: 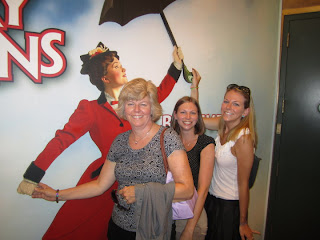 Of those, I highly highly highly recommend both "Mary Poppins" and "Billy Elliot" - mostly because they were both AWESOME and also because the other two have since closed.  Today after work, since the city was pretty empty, I decided to take myself out to another show.  Nicole's cousins had gotten the Billy Elliot tickets for half price from the TKTS booth in Times Square (47th & Broadway) so I thought I would try that out, of course, forgetting that it was 20 degrees and that, even though the city was empty, I would need to wait in line for a half hour. 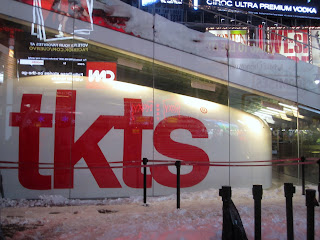 My feet eventually thawed and I ended up getting a half-price ticket to "Promises, Promises", starring Kristin Chenoweth (Wicked, Glee), Sean Hayes (Will and Grace), and featuring Molly Shannon (SNL).  I would highly times three recommend this musical-comedy as well, but you only have until January 2nd to see it, so you had better get tickets quickly.  It was really funny, incredibly performed, and had some really good songs in it.  Kristin's voice is truly amazing and you Gleeks out there might recognize the song "A House is Not a Home" is from this musical.
The "New York Moment" of the night was when I was walking home and realized people were lining up to see the stars walk out the side door.  So I grabbed my camera and decided I could stand the cold for another twenty minutes.


There you go, as requested, now you know one more item on the elusive 26 list.  You can take me to the next five shows if you want to help me cross this off.
xo