Two weeks ago, Emily and I indulged our inner 5-year old slash 90-year old selves and went to see the Radio City Christmas Spectacular at Radio City Music Hall.  I thought the show was going to be more like a Broadway show, with Playbills, strict 'you will get kicked out if you have a camera' rules, and an intermission, but it had a dinky little program, was actually very casual, with cameras flashing everywhere, and was a lot shorter and wouldn't have needed an intermission. 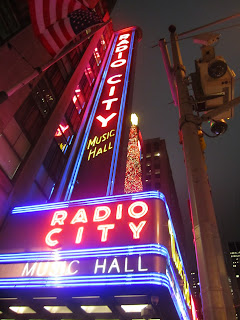 Emily and I missed the opening number so *our* show opened up with a 3-D tour of Santa's sleigh flying around NYC which was pretty cool, even though I have been openly critical of movies with stupid 3-D gimics.  When things relate to NYC I tend to give them a little more credit.  Who knows, maybe if Katy Perry comes out with a song about New York I might stop talking about how much I despise her.  (But probably not...) 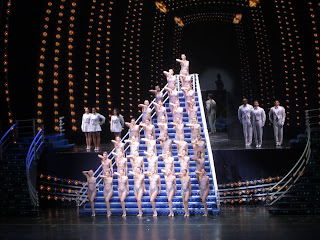 The Rockettes are VERY talented.  Going into the show, because of my aforementioned obsession with the city, I thought my favorite numbers would be those where they are dancing in and around a double-decker tour bus and traveling to Rockefeller Center, Times Square, and Central Park, singing about "New York at Christmas".  While in Central Park on stage, there is a delightful "ice-skating" routine done, presumably, on roller blades, but with all the tricks of a regular ice show. 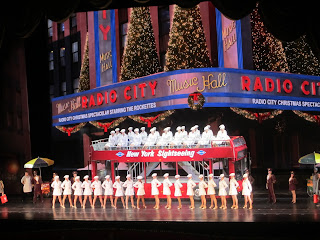 My *actual* favorite number was "The Parade of the Toy Soldiers", which they've probably been doing since the beginning of time.  You may have seen this in commercials or pictures, but when they line up and pretend to be hit with a cannon ball and fall down onto each other, it is really awesome.  It takes them a full minute and a half to fall all the way down. 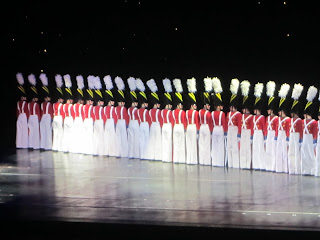 Other routines I enjoyed were a living nativity, complete with a real-life donkey and camel (any ideas on where they stay when they are in town?) and a nutcracker routine with a young ballerina and plenty of dancers dressed in full teddy bear costumes. 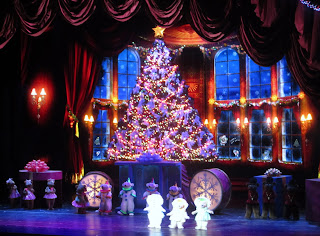 This is definitely something that you wouldn't go to every year, but I'm sure I will see it again in my lifetime.  Next time I would like to go closer to Christmas.  It was a little odd to be suddenly thrown into Christmas Eve when it was still 60 degrees out.  Not that I'm complaining about the recent weather at all.  The snow can stay away for as long as it wants to.  The only reason I need it at all is because it is on my to-do list to build a snowman in Central Park.
xo