Yesterday, Caitlin, Tyler, and I played "tour guide" to some of our friends from school who came up for the day.  It was super fun and filled with lots of walking, holiday decorations, and good food (Caitlin always knows *the best* places to get special treats).  Julie had two goals of the day, 1) to get Bobby to repropose to her in front of the tree in Rockefeller Center in front of strangers (lol) and 2) go ice skating - which, if you remember, is also on *my* holiday to-do list.  Unfortunately, neither of these goals was achieved.  Bobby respectfully refused to repropose and we ran into ridiculously long lines at all the ice rinks.
Caitlin, Tyler, and I met up in Columbus Circle before meeting our visitors.  Luckily for us, Santa Con was going on that day and we were greeted with HUNDREDS of people dressed as Santa Claus, gingerbread men, and elves.  Santa Con is a giant bar crawl which appears to be pretty fun for the participants but probably requires a lot of explanation from parents of young children who see these hundreds of drunk Santas running around Central Park and the subway. 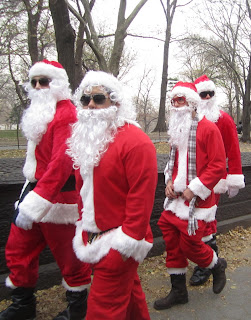 We first walked down Fifth Avenue and checked out some of the holiday windows.  Bergdorf Goodman's (59th & 5th) display this year is "Wish You Were Here" and features manikins in nautical scenes, on mythical flying horses, and in space.  They were beautiful, but not very entertaining.  My favorite windows were those of Barney's, designed by Simon Doonan, "Have a Foodie Holiday," featuring famous NYC chefs.  When I first heard of the theme, I thought it was quite strange, but these windows to me were the most fun which I have just decided is a requirement of a good holiday window. 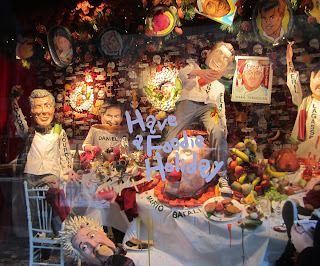 We wandered into Central Park and stumbled upon a "roast-your-own-marshmallows" station in front of Central Park Zoo.  For $2.50, you get 5 marshmallows on a stick and are able to roast them over a fire pit.  Beware of the workers yelling at you if they catch on fire and you let them burn (like Usher) - hello?!  That is the way to make the perfect marshmallow!! 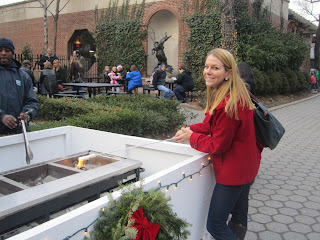 We walked over to Trump's Wollman Rink but of course, the lines were way too long midday on a Saturday.  Not a total loss as we *did* get to watch the zamboni clean the ice for a little bit.  Our visitors had already been to the Rockefeller ice rink and we later walked to Bryant Park to check out their ice rink as well.  We have decided that the best time to actually try ice skating in the city is probably at 8 am on a Thursday in early February.  Maybe I will take a vacation day then so I can check it off my list. We did end up staying for a while at the Bryant Park rink to watch half the skaters fall down, try to get up, and fall down again.  It was all pretty hilarious. 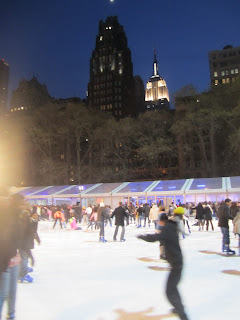 We decided to head downtown for drinks and Caitlin and I stopped into the Union Square Holiday Market to get some snacks.  I somehow missed these two booths when I was there on Thursday, but we got garlic-parsely and olive and feta pretzels from the Sigmund Pretzelshop booth and french toast, birthday cake, and peppermint bark cannolis from the Stuffed Artisan Cannolis booth.  Sigmund Pretzelshop is located on Avenue B between 2nd and 3rd Streets and Stuffed Artisan Cannolis is on Stanton Street between Clinton & Attorney Streets and I will obviously be visiting both at some point in the future. 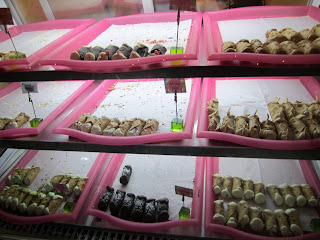 We finished out the visit at Stand 4 (W 12th St & University Place), one of the best burger joints in the city (no, still not better than Shake Shack).  Caitlin and I split our second marshmallow treat of the day, Stand's famous toasted marshmallow milkshake.  There really is no such thing as too many marshmallows, especially on a beautiful, brisk, winter day in NYC. 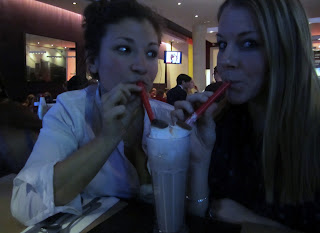 See all of the fun things there are to see / do / and, most importantly, eat when you come visit me?  Who will be next??
xo