On Saturday night (okay, Sunday morning) I had the greatest hot dog I've ever had.  Some friends and I were downtown after going out and went to a diner.  We decided not to pay $12 for soup so we got up without ordering and walked out, in search of a pizza place.  Instead, I remembered that we were right near Crif Dogs, which my coworkers have been telling me to try for about a year now.  So with my disclaimer of "If you don't like it I'm sorry, it was just suggested to me," we waltzed on over to St. Mark's Place between 1st Ave and Avenue A.

I asked the girl working there what her favorite one was and she directed me to "the chihuahua" - a hot dog wrapped in bacon with avocado and sour cream.  I ordered this and, of course, a side of cheese fries.  The boys both got chili dogs and chili cheese fries.  My Blackberry photo does not do this meal justice. 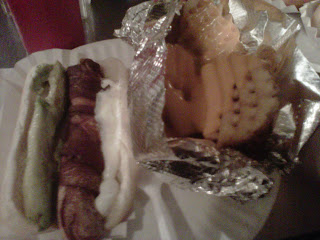 Since eating this amazing concoction I have basically done nothing but talk about it and I've been craving it badly ever since.  So today, I decided I was going to make "the chihuahua" for dinner.  I bought hot dog rolls, hot dogs, bacon, guacamole, and sour cream.  I boiled the hot dogs, microwaved the bacon, wrapped the bacon around the hot dogs, seared them a little bit, spread the guac and the sour cream on the bun, and placed the bacon-wrapped hot dog in between.

It was awesome.  Definitely messier than at Crif Dogs - I'm not sure how they wrap the bacon so well around the hot dog, but it was also healthier since I used turkey hot dogs/bacon and fat-free sour cream.  Since I was talking with a coworker about this, I'm bringing in the ingredients so we can have them for lunch tomorrow.  I'm going to just put the bacon on top instead of trying to wrap it in an attempt to make it less messy.

Bonus Tip - Inside of Crif Dogs, there is a "hidden" door into a bar called PDT (Please Don't Tell) - no worries, everyone else has already told.  You have to enter a "phone booth" where the bouncer on the other side decides if you get in or not.  Maybe I'll try it out next time since we were way too involved with our hot dogs to think of anything that could possibly be better.