This blog is slowly making me reveal my 26 Things to Do Before I Turn 26 "bucket list."  I am now just over halfway through the list but already 3/4ths way through the year.  I will need to go into extreme goal-accomplishing very soon.  Any help would be much appreciated.
One item on my 25 list was to be in a live studio audience.  This was transferred to my 26 list and I completed it on Tuesday thanks to my cousin Mike.  Mike and his friends got tickets to The Daily Show with Jon Stewart and one of his friends could not make it that day due to the impending snowstorm.  I of course jumped on this opportunity right away. 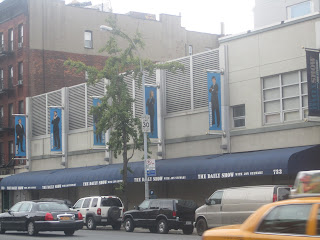 Since Jon Stewart's and Stephen Colbert's studios are in my neighborhood, I've attempted to get tickets to see them many times.  Every time I've clicked on the "tickets" tabs on their websites, I have been informed of the following:
Unfortunately, there are no tickets available to see The Daily Show with Jon Stewart at this time. Check back soon to secure your tickets or sign-up below to receive e-mails letting you know when new dates open up.
Then I have signed up so that they let me know when new dates open up, and each time they have emailed me, I have clicked on the link immediately to get the same "Unfortunately..." message.
So when Mike told me that he did get tickets that way, I just assumed that my computer just didn't like those websites or that I was doing something wrong, but I actually just clicked on the Colbert Report ticket site and, for the first time I've seen, there is ONE ticket available for tomorrow's show.  So apparently, this does work, but you just have to do it at the right times.
Mike and I met at the studio around 3:20 and got our tickets and waited outside for Chris and Kara to get their tickets.  We were told to come back around 4:45 to start lining up, but people starting lining up around 4:20 so we did as well.  We ended up waiting in line until around 5:45 and then were put through security and sent into the studio. 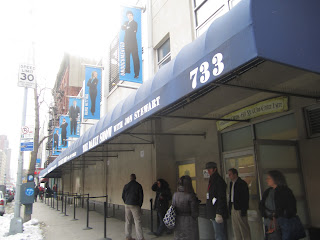 The nice thing about the show is that no matter what tickets you end up having in your hand, you have an equal shot of getting a good seat at the studio because the people who work there just point to you and tell you where to go.  So even though we were in back of the line and my ticket was "208", we ended up in the front row and had plenty of legroom.
A comedian came out to rouse up the crowd and let us know that we were the only laugh track and that we had to be really loud, which obviously was not a problem for our group.  Then Jon Stewart came out to answer a few questions from the crowd.  We were informed not to ask anything that sounds creepy, so we didn't ask him about how Mike's dad student-taught in his class at Lawrence High School for five weeks.

The show then started and it was really cool to see how the cameras moved around and how the correspondents were only about four feet away from Jon even though pretending to be at the Verizon conference where they revealed the iPhone news.  After the iPhone bit, another correspondent came out to discuss the changing of the language of Mark Twain's Huckleberry Finn.  Our guest that night was Colin Firth who was promoting his film "The King's Speech."  Overall, I thought it was a good episode and I was really pumped to have crossed this task off my list. 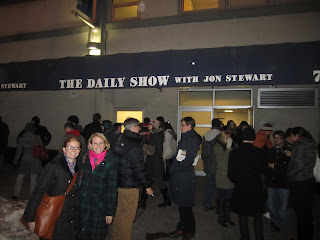 To see the episode I went to and to listen for my cheers and laughter, click here.
xo