Yesterday, Emily and I decided to be really ambitious and go to the Museum of Modern Art with our NYE hangovers.  While discussing the exciting events of the previous night, we wandered around looking at art for a few hours which made me feel like I was ringing in the new year the right way instead of in my snuggie on my couch groaning about my headache.
The first thing we saw when we walked in, and my favorite piece of the day, was a performance exhibit called "Performance 9: Allora & Calzadilla."  Sitting on the side of a really large area was a piano with a hole cut in the middle and a person inside the hole playing the keys from the opposite way.  So this, in itself, was really intriguing and then we read that since the hole was cut in the piano, it really altered the way the piano sounded as it "renders two octaves of keys inoperative."  Then, the real kicker was when the performer started to walk forward, while playing, into the crowds of people surrounding the piano.  It was pretty funny to see the panic as everyone quickly rushed backwards into each other to get out the way.  Check this guy out:

From there we went to see the Abstract Expressionist exhibit "Rock Paper Scissors" which I was hoping was artwork of rocks, paper, and scissors in different mediums but the title of the exhibit actually referred to the mediums used - wood, stone, etching, lithography, etc. 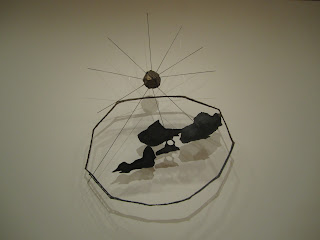 All the way up on the sixth floor is an exhibit of Andy Warhol's "Motion Pictures."  There were a dozen films playing on the walls of the gallery of people who were filmed for hours at a time, some just starring into the camera, one woman was brushing her teeth, and one woman was fixing her hair and makeup.
The MOMA is the home to a bunch of my favorite paintings, including tons of Jackson Pollacks, Van Gogh's "Starry Night", and Picasso's "Three Musicians" which I actually modernized for a Spanish project in high school by doing an oil painting of The Beatles in the style of Picasso.  Guess which one is mine: 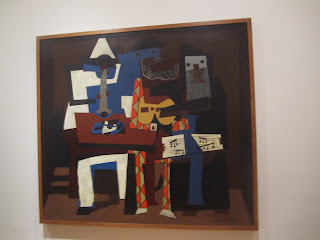 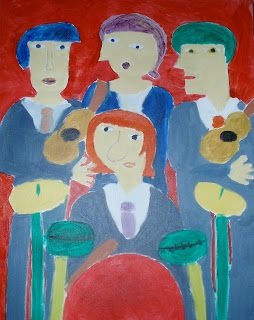 Other cool exhibits we ran into were "Pictures by Woman: A History of Modern Photography", "Counter Space: Design and the Modern Kitchen", "New Photography 2010: Roe Ethridge, Elad Lassry, Alex Prager, Amanda Ross-Ho".  And don't worry, I jumped in front of a painting for you. 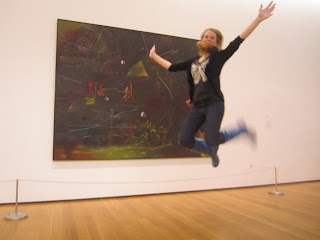