Get'cha Head in the Game

All this news about Carmelo Anthony coming to the Knicks gives me the opportunity to revisit when Emily and I went to see the Knicks in the fall.  One of our prizes for winning first place (and completely dominating every single other team) in the Hoboken Amazing Race was tickets to a Knicks game. 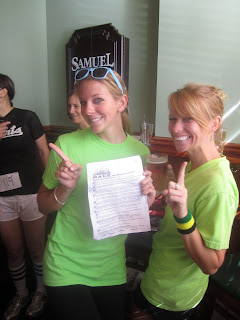 The guy running the Amazing Race was able to get pretty sweet tickets from his work for "almost any home game within the first few months".  We decided that it would be most fun to watch the Knicks play the Celtics even though that game was preseason, so we attended the home preseason opener on October 13th at Madison Square Garden.

I really liked the environment at MSG.  Basketball is such a great game to watch live since there are points scored every thirty seconds and the crowd goes wild each time.  Em and I were also on the lookout for celebs.  I guess because it was the preseason opener rather than the season opener, Spike Lee and Jay Z had other plans.  We did see a few D-listers (don't worry, I'm aware I am currently a Z-lister) like Josh Groban and Mark Hopper from Blink182.  And apparently that guy who played the genie in Kazaam is now on the Celtics and although he didn't play (because he's 80), he was sitting courtside watching his team.

So although the Knicks didn't win (104-101, Celtics), we had a really good time.  We talked about trying to come see LeBron play but never went through with it.  But there will be more chances next season, plus I gotta check out this 'Melo fellow sometime.
xo