My dear friend, George, was able to get two tickets to "Wicked" through his work.  He had already seen the show so he offered me the tickets to help me on my way to my 10 Broadway Shows goal that was on my 26 list.  The only payment he asked for in exchange for these tickets was a shoutout in this here blog.  Cue shoutout: THANKS GEORGE!
"Wicked" is based on the book by Gregory Maguire, in which the author explores the Wizard of Oz through the life of the Wicked Witch.  It is focused on the story that the Wicked Witch is actually not wicked, but has just been through some really hard times.  I actually started to read the book about two years ago but could never get really into it because it was so dark.  But I had heard that the musical is very different and of course I was willing to go see it (especially for free!) 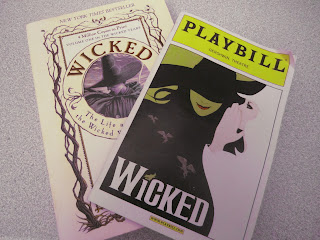 I decided to bring my friend Chris as my date for the evening.  At my request, he bought me a hot dog from a street vendor as a thanks for the invite (yummm).  We walked over to George Gershwin Theatre (51st and Broadway) to go see "The Best Musical of the Decade" according to Entertainment Weekly. 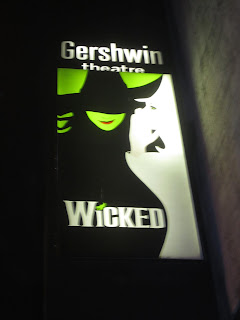 The musical was great!  I really enjoyed it.  I liked how I was already familiar with the storyline but it was done in such a different way than everyone is used to.  The actors were really good, although I wish I had seen Kristin Chenoweth in the role of Glinda (but I was seven years too late).  I felt like the actress playing Glinda (Katie Rose Clarke) was channeling Kristin a lot, as the way she was acting was the way I have seen Kristin act in "Promises, Promises" and in "Glee."  (PS. Gleeks - the song, "Defying Gravity" is from this musical.)  I think the actress who played the Wicked Witch (or Elphaba), Teal Wicks, was incredible.  And I was really able to relate to Elphaba when she walked into the Emerald City for the first time and got the impression that she was finally right where she belonged, since that is how *I* feel about the great and powerful city of New York.  Of course, it turns out that she did not actually belong there, but that is another story.
After the play, we stopped by the Shake Shack in Times Square (44th and 8th) to get burgers, cheese fries, and shakes.  All I wanted for a shake was their classic peanut butter flavor, but I should have tried their special Car-Mallow Anthony Shake, in honor of Carmelo Anthony coming to the NY Knicks.  Maybe it will still be available the next time I go. 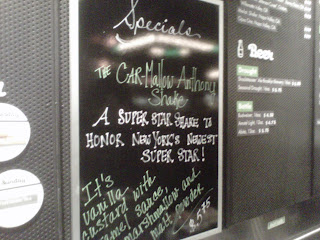 My friends and I bought tickets to see "The Book of Mormon" in April.  So I just have two more shows to go!  Hopefully George will be able to help me out a little more.  :)
xo