I've had a little bit of modeling experience in my life.  My dad's newspaper was always looking for cute kids to illustrate stories about the first day of kindergarten and the 100th birthday of peanut butter, so my stage parents put us in the paper a lot.  Check it - I'm the one with the sweet pigtails.
So I haven't had a ton of modeling experience since my Press of Atlantic City days, although I did do an event for a friend who worked at Seventeen Magazine one summer and I did walk the runway at work for the "What Not to Wear to Work Fashion Show" when we did "Take Your Child to Work Day" a few years back.  But modeling is something that I am interested in and I think would be really fun to do more.  I think I'm past my prime and I'm not actively pursuing it, but I do still think about it once in a while.  So when Nicole, Dave, and I went to brunch one day at City Lights Diner (52nd and 10th) and saw two photographers setting up for a shoot and a model sitting in a booth sipping coffee, I knew I had to make some moves.
We talked to the photographers and asked them what was going on.  They explained that they were taking "stock photography" which could really be used by any company or entity who wanted to use it on billboards, taxi tv, magazine ads, etc.  They were taking pictures of generic city scenes to be used anywhere in the country.  I half jokingly said to one of the photographers, "Do you need any extras?" and then when I saw him actually think about it, I added, "Seriously."  He said that would be great and came up with the idea that I would be walking outside on the phone with the model and I would see her in the window and we would wave "hello" and then I would walk inside.  Simple enough. 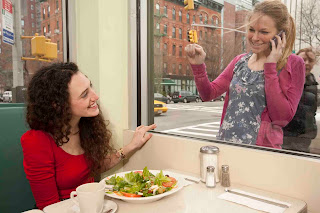 For the next couple hours, I was outside walking (sometimes running) back and forth to the window of the diner, tapping on the glass and waving while being videoed and photographed.  It was pretty funny to see everyone's reactions while they were walking by.   I had a fun afternoon and I talked to the photographers about doing another shoot with them soon.  They are filming something the next two weekends but I will be unavailable for both, but they are also doing some shoots this summer.  So look out for me on any billboards and let me know how I look.  Also I'm totally available for other projects.  :p
xo

Email ThisBlogThis!Share to TwitterShare to FacebookShare to Pinterest
Labels: NYC, Trying to be Famous