I'd Catch a Grenade for Ya

This past Wednesday, I found myself with nothing to do after work (gasp) and I couldn't just come home and relax so I looked on StubHub to see if anyone had any theatre tickets for sale.  I did still have to see three more Broadway shows (as per my 26 things to do before I turn 26 list) and I am running out of time before my birthday.  I ended up finding a $60 third-row orchestra ticket to "Catch Me If You Can" which just opened up last week.  It's one that I've wanted to see so I went for it.  "Catch Me If You Can" is based on the movie of the same title, which is based on the story of conman Frank Abagnale who posed as an airline pilot, a doctor, and a lawyer, and passed $2.5 million worth of forged checks in the 1960s. 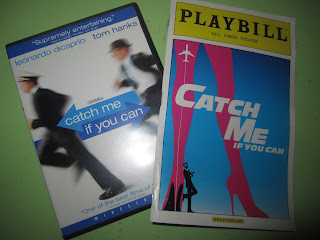 I enjoyed the show because I think the story line is just so engaging.  The production itself was entertaining, but the songs were nothing special.  I had never been that close to the stage before so it was a really interesting experience for me.  Since I was on the aisle, the actors ran right by me a few times as they were running up or away from the stage.  I did get a little distracted because I could see the spit from the actors while they were singing, which was kind of weird.  But luckily, only the people in the first and second rows actually got spat on.
xo