Your Body is a Wonderland 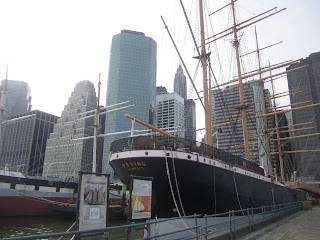 The exhibit shows actual human bodies and parts all cut up to see the insides.  The bodies are preserved by a process that removes all of the water from the bodies and replaces it with some sort of rubber.  The rooms in the exhibition traveled through the skeletal, muscular, nervous, respiratory, digestive, urinary, reproductive, endocrine, and circulatory systems.
While it all was incredibly interesting, parts of it made me feel a little weird.  I knew that these were all actual humans with actual human lives at one point or the other.  It was a little strange that all of the bodies still had eyebrows and lips and belly buttons on them.  The most jarring part for me was to see the difference between a healthy lung and a cancerous lung, or a healthy brain vs. a sliver of brain that had a stroke.  There was also another section of the exhibition that showed fetuses at different stages of development.  This was also pretty shocking to see, but at the same time, incredibly interesting.

After we got our science fix for the day, we decided to travel into Brooklyn to grab something to eat.  Ravi had his car so we drove over the Brooklyn Bridge, and then five minutes later accidentally drove *back over* the Brooklyn Bridge.  We then traveled back into Brooklyn via the Williamsburg bridge this time and proceeded to pretty much ran out of gas.  After driving around in circles for a thousand minutes trying to find a gas station, we finally googled and found one.  We all got out of the car as if we had been on a road trip for seven hours and stretched and actually got beverages from the gas station soda machine.
We used Ravi's Urban Spoon application with rad sound effects to find an Italian restaurant in DUMBO (Down Under the Manhattan Bridge Overpass) and found three places right around the corner from Grimaldi's (the most wonderful pizza place in the universe).  We walked to the water and realized that we were *directly* across the river from South Street Seaport, where we had started out our journey, an *hour and a half* later. 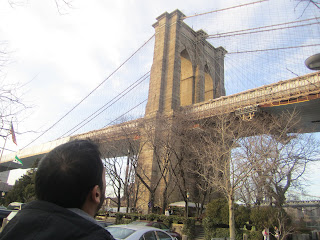 Pete's Downtown had the most appetizing menu to me so we went there and everything was fantastic.  Plus, there were mirrors everywhere so I could stare at myself while I was eating, which I just really enjoy.  We got two lobster bisques for the table and - get this - it actually had lobster meat in it, not shrimp meat (that's for you, my former OB crew).  I ordered the Shrimp and Mussels Fra Diavolo.  It actually came in regular tomato sauce, so I asked for the Fra Diavolo on the side, but it turned out that I liked the accidental  regular sauce better. 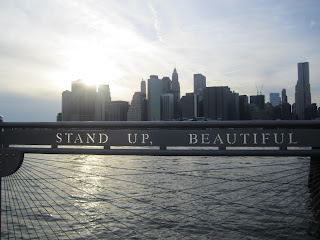 Amie and I were craving ice cream and both got a treat at Brooklyn Ice Cream Factory.  I was glad that we resisted - or were denied - getting Mister Softee when we were in Manhattan earlier.  Amie got vanilla chocolate chunk (the most popular flavor according to ice cream scoop man) and I got vanilla chocolate chunk, chocolate chocolate chunk, and an extra surprise half scoop of strawberry from ice cream scoop man.  It was fabulous and super creamy but it really was way too cold outside to eat.  But no worries, my muscles were warming up my body by making me shiver (yes, I learned this in the Bodies exhibition). 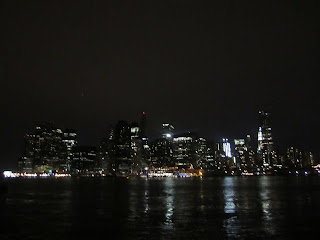 On our way home, we decided it would be fun to follow a CitySights tour bus and kind of ride the tour for free: stopping behind the bus when it stopped, guessing what the tourguide was saying, and trying to figure out what the tourists were taking pictures of.  Eventually, we ended up passing the bus and realized the bus driver was giving us the death glare so he must have noticed we had been creeping for a while.  Luckily we were stopped at a light so the driver got to glare at us for what seemed like twenty minutes.  We sped off quickly  back to Manhattan before the tour became a tour of our route home and to our apartments.
xo