I Want to Ride my Bicycle

On Sunday, a friend and I were sitting outside having brunch at my *favorite* brunch place, The Eatery (53rd and 9th), and I was enjoying my Scrambled Egg White Tortilla, per usual.  My friend kept saying that he wanted to ride bikes since it was so beautiful outside and I kept just giggling about the image of us on bicycles after a 14-year hiatus.  I was kind of taking his suggestion as a joke, but he kept insisting on it and I realized he was actually serious.  When he pointed out that Manhattan Bicycle Shop was directly across the street from us, we took it as a sign, and went to check it out.  “If it’s less than $10 an hour, we’re doing it.”   It turned out to be only $5 an hour (minimum of two hours) so we signed up immediately and were handed our bikes, which unfortunately had hand brakes, instead of the foot brakes I was used to back in the day.  I realized this would be a challenge and I knew I had to bring my A-game, so we went to my apartment to exchange my Longchamp for my Mets string backpack and my Rainbows for my Nike Frees.  This was serious. 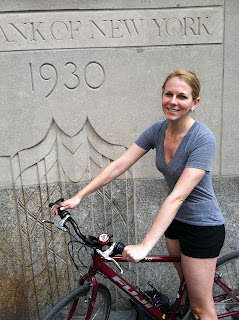 Despite my initial misconceptions and nerves about being run over by other cyclists (as I always have almost-accidents with them while I am running), we rode down the West Side Highway at lightning speed.  Before we knew it we were all the way down in Tribeca.  We got off the highway and rode on the streets / sometimes on the sidewalks, ringing our bells obnoxiously at crowds of people ahead of us.  Now I know that we aren’t actually allowed to ride on the sidewalk, but aside from getting a few glares from people we had rung our bells at, there was nothing saying we couldn’t.  We ended up in South Street Seaport and decided to try the new restaurant, Soul Daddy, which was the winner on NBC’s “America’s Next Great Restaurant,” which we had both watched.  The winner from the show, Jamawn Woods, was actually at the restaurant so we talked to him a little bit and took photos with him, because, why not? 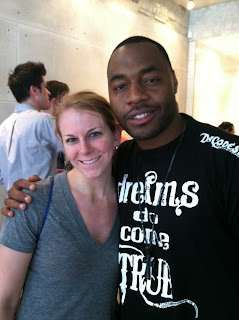 Jamawn, although he of course said everything on the menu was fantastic, suggested the ribs, cheese grits, and corn bread waffle.  In addition to that, because the rib meal came with two sides, we got sweet potato salad.  I’m not sure if I had just worked up my appetite from the intense bike-riding I had just done, but I enjoyed it and would get it again if in the area.  Unfortunately for Jamawn, I think the NYC location isn’t really in a good spot because there isn’t really that much foot traffic in the off-season. 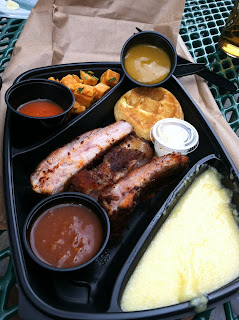 We then rode the bikes back uptown and returned them, paying only $15 each for a really fun three-hour long activity.  According to Google, if we had taken the most direct route, we would have biked 11 miles that day, but since we were racing around a little on the streets in the Financial District, I think it’s a little longer.  While I was getting ready for work this morning, I saw a news report about a new video created by the NYC Department of Transportation, and starring John Leguizamo.  Check this out, I’m pretty sure it was targeted toward us.