The Man, The Myth, The Legend

When I heard that President Obama was going to be at Ground Zero on Thursday, I decided I was going to do everything I could to see if I could catch a glimpse during my lunch break since I work only a ten-minute walk north of WTC.  I knew that I wasn't going to be able to super-close, but I wanted to try my best because I felt this was a once-in-a-lifetime opportunity.  So I popped outside around 12:30 and immediately saw a flood of people standing on the corner of my building.  My first thought was "WOW - there is such a crowd it stretches from Ground Zero to HERE?!"  And then I realized that they were actually lined up behind police barriers and that there was another crowd lined up across the street and I put it together that the President was going to be driving down this road. 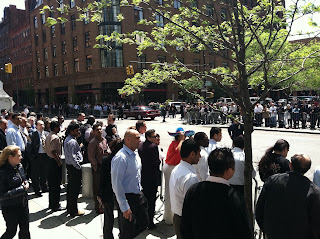 A coworker and I (and hundreds of other coworkers, I guess) stayed and watched for about 15 minutes waiting for the President's motorcade to drive by.  A few NYPD motorcycles would come by, then a few minutes later a black van would drive by, then finally we saw the giant trail of motorcycles, NYPD cars, and black cars, vans, and Escalades drive by.  Most of the crowd cheered when the car that we thought held Obama drove by, although we couldn't see him at the time.  I obviously was snapping some pictures. 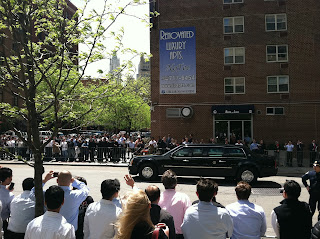 I also knew that Obama was going to be visiting the NYPD Precinct 1 which I pass everyday on my way to work.  I walked over to see how close I could get to the precinct, but of course I was stopped within two blocks by more police barriers and officers.  One of the officers told me that Obama would be driving back down the street where I had seen him before, so I walked back over to my building again to see if I could see the motorcade a second time.  Sure enough, about ten minutes later, the motorcade drove by again and this time I took a video *AND* this time, I actually saw President Obama!  He was smiling widely and waving directly at us when he drove by!  If you watch this video, after I pan over to one of the cars around the thirty second mark, it's the following car that Obama is.  Please ignore the shaky visual and my reaction of "OMG OMG".  Lame, yes, but it really was cool!  If I knew how, I would try to slow down the video but I have no clue how to currently.
While I was taking the video, a friend from work was taking more pictures and sent me this one.  If you look hard enough, you can make out a head and a hand waving in the backseat. 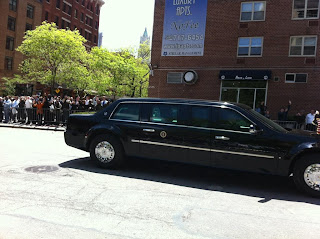 Whatever you think about politics, you have to admit it would be cool to see the President of the United States on your lunchbreak.  It was especially moving because of everything that had happened during the prior week which sparked a return of patriotism.  It was definitely something I won't forget.
xo