This week, I pretty much should have worked for US Weekly.  I don't know why, but I was stalking stars all over the place.  And like I talked about in my Gossip Girl post, I am *sooooooo* not a cool New Yorker when it comes to celebs and I really don't care.
Last Thursday at happy hour, I saw two stars from the Sopranos walk into the bar.  I had seen Steve Schirripa (Bobby 'Bacala' Baccalieri) there before, and I got a picture with him last summer.  The funny part is that I never actually have even seen one episode of the Sopranos, and I more recognize Schirripa from his role as Ben Boykewich's dad on "Secret Life of an American Teenager".  Yup, I just admitted that I watch that show.  Totally unashamed.  A girl who works with me was trying to take a picture with him and Vincent Curatola (Johnny 'Sack' Sacramoni) with her Blackberry but it wasn't working, so I pulled out my camera (which, as you know, I always have) and helped her out.  Of course I took one too and called Schirripa Mr. Boykewich and talked to him about last week's "Secret Life". 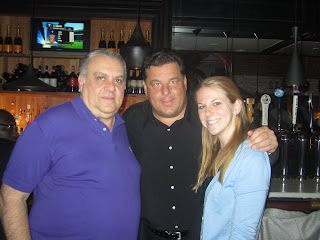 On Tuesday I was taking a quick walk in the afternoon outside of work and I saw a group of paparazzi outside of a hotel nearby.  I lined up right along with them and tried to find out who was in the hotel but they were being such losers and wouldn't answer anyone's questions.  Somehow we all found out that Cameron Diaz was in there and I decided I would absolutely wait for her to come outside.  A few minutes before she came out, Charlie Day from "It's Always Sunny in Philadelphia" exited the hotel as well.

On Wednesday, a coworker and I were walking across the street to another happy hour and we saw a paparazzo running down the street.  We looked at each other, shrugged, and started running after him to see who he was chasing.  We saw a man who kind of resembled Lenny Kravitz walking a dog down the block, but we weren't really sure if it was him or not.  We finally recognized that it was not him AT ALL and felt kind of stupid for running after him.  No clue who the paparazzo was chasing though, it could have been JT for all we know.  Can you imagine if I had *just* missed him?!
Today, I took a late lunch and went to the Macy's in Herald Square to see if we could get into Justin Bieber's perfume launch.  Yes, you read that correctly.  I am 26 and wanted to see Justin Bieber AND Justin Bieber has a line of perfume.  My friends and I entered the cosmetic floor at Macy's and saw some crowds of people up ahead so we went to check it out.  We ended up behind a blockade and were just kinda looking around when we heard girls SCREAMING.  They screamed for about 2 minutes, we heard a voice on a microphone, then more screaming, and then he was gone.  We don't know what he looked like.  We don't know what he said.  But we do know, that for that five minutes, we breathed the same air as Justin Bieber, and all was good in the world. 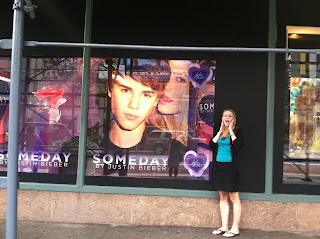 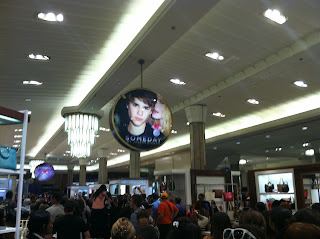 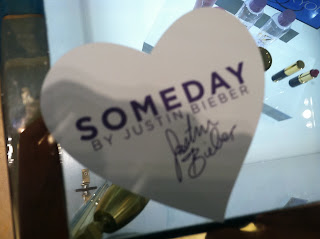