One of the items on my 27 list is to "Explore Astoria, Queens" for three main reasons:
When Christie is all settled in, I plan on going to Astoria and exploring the Greek restaurants, the Bohemian Hall Biergarten, and the Museum of the Moving Image (which frousin Emily has been talking about for months).  But yesterday, I got an intro to Astoria when I went to go watch the 4th of July fireworks with Nicole, Christine, Ryan, and some of their friends in Astoria Park.  Maybe it was the creative vibes I was feeling from everyone around me (you should have SEEN all the awesome cameras that were out), but I was thinking a LOT and got some really helpful realizations about myself while I was oohing and ahhing - which all kind of indicate that I am somewhat of a child.
1. I eat like I am seven.
Everyone around me had packed super awesome salads or homemade pastas with fresh vegetables from local farmers through a co-op.  I ate this (please note I had already eaten my Slim-Jim prior to the photograph): 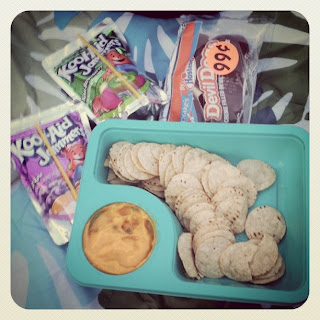 2. I really like bridges and would probably try and build them with Legos if I had any. 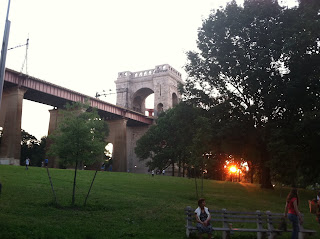 When we were walking toward the park I saw the Hells Gate Bridge and had no idea what it was but I thought it was beautiful!  I really wanted to climb it or walk across it or even just paint it.  It looked so pretty in the dark blue sky all lit up with the bursts of light from the fireworks.  Ryan said it was a bridge for trains and while we were fireworking, a short little train went over the bridge and tooted its horn and then stopped while the conductor climbed out and watched the fireworks with us.  Oh how I wish I had been that conductor.
I also really liked this guy, the Triborough Bridge: 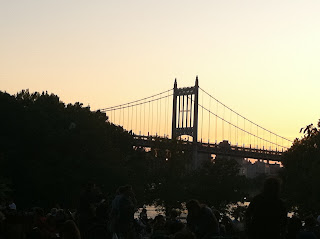 (This all reminds me that I've never written about my trip walking across the Brooklyn Bridge with one of my boos from home, Aubrey...something to look forward to)
3. I wear way too many glow-in-the-dark headbands.
Alumni Weekend: 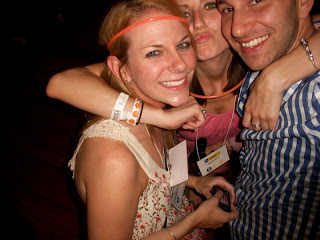 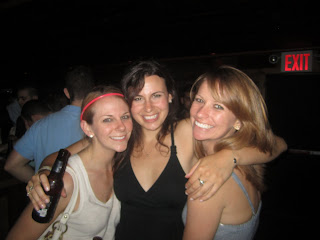 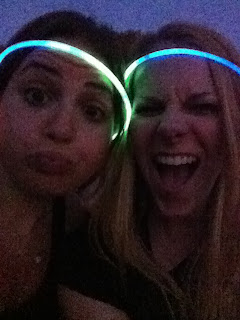 Oh, and the fireworks were great!  They started off somewhat behind a set of trees and everyone in the park just kind of laughed for a little while crossing our fingers that they would go up a little more, and we got our wish.  I don't remember seeing heart-shaped or planet-shaped fireworks on the Jersey Shore ever, so I was impressed even though all of the hearts were upside-down or sideways.  I'm kind of glad that technology hasn't gotten so good that they can make perfect renderings in fireworks form, although this does bring to mind, how did Uncle Jesse propose to Becky with those perfect letters in the sky above Cinderella's castle in Disney World?