One of the best decisions I made this summer (although there really were so many) was to join a Zog Sports bowling league with some of my coworkers.  Zog Sports is an organization in NYC (and in other cities) that organizes different sports leagues and the winners of the leagues get money donated to a charity of their choice.
Our team name was an Erin original, "Did I Gutter?!" in the style of "Did I Stutter?!"  The season was six weeks long with a finals week.  We were somehow in second place going into the finals, which probably had something to do with the team who eventually won the finals forfeiting to us one week and our handicap of 60 points per game after the first week.  We started off each Wednesday with an intense pregame like all-you-can-eat wings / all-you-can-drink beers at Mudville or $3.50 margarita's at Latitude and then continued with beer towers and lemon drop shots at the alley. 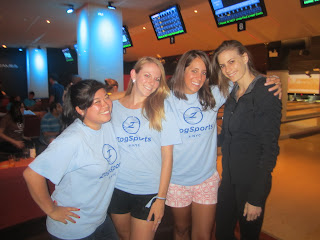 Some of my favorite moments: 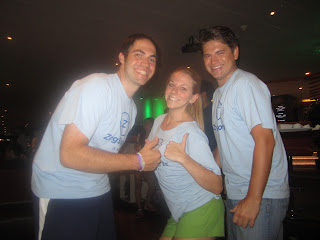 I am actually really thankful that the league is over.  Thursday mornings were rough.  But I could definitely see this being a next summer thing, too.  Maybe I will practice in the meantime so that I can eventually break 80...I wish I were joking.
xo

Email ThisBlogThis!Share to TwitterShare to FacebookShare to Pinterest
Labels: Nights Out, NYC, Sports