I'm kind of embarrassed to write this next post.  You guys know I have a thing for seeing and taking pictures of celebrities.  I equate it to wanting your own picture of Machu Picchu or one of you with the Great Pyramids.  But I can't really compare Kim Kardashian and DJ Pauly D to wonders of the world.  Yes, I have just let it out that those are the two celebrities I was waiting for on NYC's Fashion's Night Out on Thursday.  When I told my dad this - who once questioned philosophically, "Why *are* there Kardashians?" - he said, "Oh, Erin.  No." 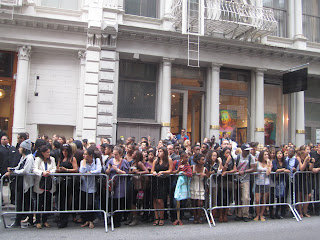 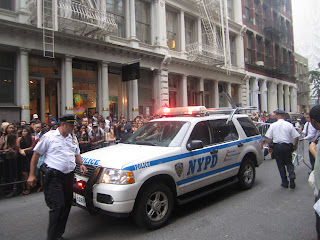 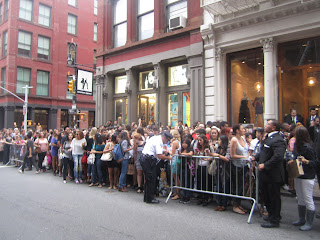 A few friends and I wandered over to Soho after work, thinking there would be some killer parties and since there were about 300 stores on each block all serving free champagne, we would definitely have more fun than in midtown.  We had heard about the celeb potential at Dash - the Kardashian sisters' store on Spring & Greene Street - and thought we would start there.  There was already a ridiculous crowd at 5:30 waiting for Kim & Pauly D to arrive.  I immediately felt embarrassed when I saw a sign held out by some lucky kids with an awesome balcony in their apartment above Dash. 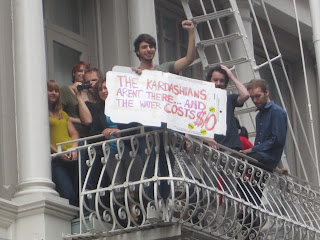 But not embarrassed enough to leave.  We were in the front row directly across the street from Dash.  The event was supposed to start at six.  My friends and I justified it by saying, "We're right here.  We have good spots. We may as well just stay.  It won't be too much longer.  It will be funny."  We gave ourselves ultimatums:  "We're only staying *five* more minutes."  An hour and many police barracades later, Kim finally showed up in an Escalade, late to her own party, at 6:30.  The car pulled up right next to us so that I could have reached in the car if I were a crazy person and the crowd went wild. 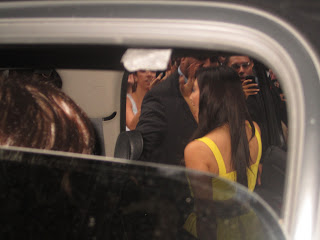 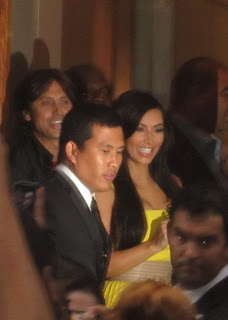 Kim stood at the doorway and took a picture of the crowd with her phone.  She tweeted it, saying "Wow NYC really showed the love for Fashion's Night Out at Dash!"  When my friends and I later saw the photo, we realized we could see ourselves which was hilarious.  It's a "Where's Waldo", but I am smack dab in the middle, in the front of the back, between the police officer in the white shirt and the girl in the red.  See if you can find me:
This photo gave me my first (and hopefully not last) appearance on the websites of TMZ,  MTV, and Hollywood Life.  After the sighting, my friends and I checked out some other stores in Soho.  We got drinks at Molten Brown, Burberry, Diesel, and Longchamp, among others.  It was a fabulous Fashion's Night Out.  This was by the way, the second time in eight days that I was in the same place as Kim K.  I'm sure she's sending me my half of our dolphin-shaped BFF necklaces next week.
xo