She Works Hard for the Kimchi

Normally I don’t have *any* friends from home in the city and I miss them all very dearly.  This week, I was really lucky and had two friends from the homeland randomly in town.  On Monday, I had a lovely dinner / catch-up sesh with Aubrey at Spring Street Natural (more on Spring Street later, stay tuned).  On Thursday, I had a similarly lovely dinner / catch-up sesh with Kristina at Bann.  Bann is a Korean BBQ place near my apartment.  I had been wanting to get Korean food for a while and I didn’t really know where to go, but when Kristina told me her hotel was a few blocks from my apartment, that narrowed it down. 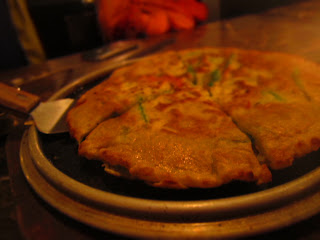 For an appetizer, we ordered the Pa Jun – a pancake with peppers and onions baked into it.  It looked like a pizza and tasted just like Bisquick with veggies baked in.  I think I’m going to try and make it on my own sometime.  We got the “small” barbecue platter which had Kal Bi (short rib), Bul Go Gi (rib eye), and Sae Woo (shrimp) along with vegetables and rice. 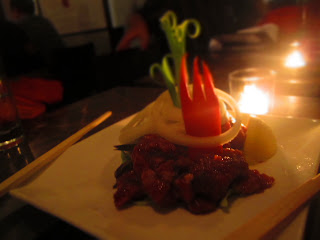 Kristina had been to a lot of Korean places in San Francisco but she usually let someone else do the cooking part, so we had to ask the waitress for a quick low-down of what to do - although it is surprising that we didn't get any instructions when the food was put down.  She helped us put the first round of meat on the grill in the middle of the table and said she wanted us to eat it in the traditional way, which was to wrap up the meat in a piece of lettuce with some vegetables, peanut miso sauce, garlic sesame oil, and rice. 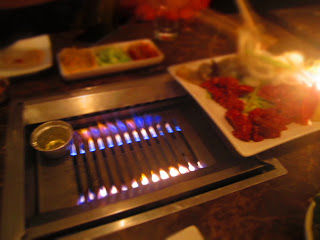 Everything was delicious!  Well, everything that I tried.  I didn’t try the kimchi which came alongside our BBQ platter.  It is one of the most traditional Korean dishes, but I have tried cabbage in so many different forms and I have never liked it / have been really grossed out by it.  While I always tell myself to try everything, there was so much else on the table that was amazing that I didn’t want to spoil it with any form of disgustingness. 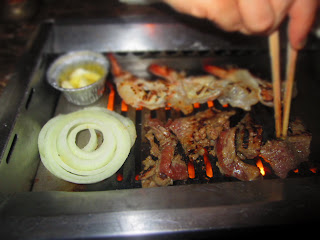 I would definitely go again, but maybe try a place in Korea Town next time, as some of the ratings on Bann said “it’s not authentic enough”.  I’m not sure why I like places where I have to do work in order to get my food, but then I only cook at home once every few weeks.  Maybe it’s because I know I won’t be stuck with the dishes.
xo