RG and I have been talking about going to the New York Transit Museum for about two years now.  I think we both have a minor obsession with the subways.  He has recently questioned, “Is every subway station the same length?  You never have to walk a few cars up or a few cars back like you do on actual trains, every car opens at every stop!  How do we find this out?!”
Then I have recently started to read “The Mole People” by Jennifer Toth, about the people who live in the tunnels under NYC.  For the full effect, just as I only listened to the Beatles, Adele, Oasis, & BBMak while I was in London, I save this book and only read it while I am actually *in* the tunnels, of course while protected by the walls of the subway car around me.  I really have NO IDEA what goes on underground nowadays as this book was written in 1993, but it is so incredibly interesting to read about these people who, at least when I was in third grade, were living several stories below Manhattan in actual little rooms and communities that they developed.  I’m not saying I want to *live* down there or ever *go* down there, but it has been interesting for me to see how these people did it.  I’m comparing it to my larger obsession with the Real Housewives of Beverly Hills and Jersey Shore which I claim to watch simply to see how different their lives are from mine.
A few weekends ago, RG and finally I took the trek into Brooklyn to see the Transit Museum.  Funnily enough, we actually ran into problems on the subway on the way there.  We ran to catch the train from West 4th Street and then for some reason it wasn't heading into Brooklyn that day and only went as far as 2nd Ave.  The conductor said we could catch the F train at that point but after waiting 15 minutes underground, we took a cab instead.  We didn't get to the museum until almost 4 and the museum closes at 5, but we were told we had plenty of time to see everything we needed to, although we decided if we had to, we would come back since it is only $7 a pop, a true bargain in NYC. 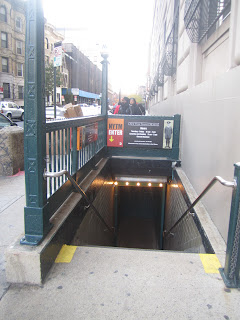 The museum is located in the old Court Street station and the entrance is virtually indistinguishable from a current and working subway station.  There are two stars of the museum.  One is definitely "Steel, Stone, and Backbone" - a historical exhibit about how the subways were actually built.


The other star is the entire downstairs of the museum, which is full of old subway cars.  It was cool walking through each car and guessing the decade and imagining what it would be like if the cars were like that today.  They also for some reason had some current cars too, I supposed in case you don't actually take the subway normally, or if you just wanted to compare them right there.  The ads and signage in the subway cars were one of the most interesting parts.
I think overall that the museum is probably a lot more fun for children than adults, and there were tons of children running around and having a blast playing in all the buses and trains, but we still had a good time.  I would actually disagree with the attendant who told us we would have plenty of time to explore everything, because we ended up skipping the ElectriCity exhibit for the most part and skipped the bus and the money train exhibits because we didn't find them very interesting.  We would have needed another 45 minutes at least to go through those thoroughly.  I also think the museum is probably most interesting to actual New Yorkers who spend part of every day underground and spend more time thinking about the subway (or is that just RG and me who do that?) than tourists who may not appreciate it as much.
According to wikipedia, there are exhibits about the bridges and tunnels too, but we seem to have missed them.  I would have probably really enjoyed that, especially the history and construction of bridges.  We also didn't see anything about how they decided which lines go where, or where the stops should be, although I suppose it could be assumed it was based on population at the time of construction.  And we never got our question answered about how long the subway stations all are.  Maybe we need to take another $7 trip after all.
xo