This City was Built on Rock

A few weeks ago, after a fabulous brunch at Cornelia Street Cafe, a  subway ride uptown, and a walk across Central Park, Ravi, Kristyn, John, and I walked up to the Museum of the City of New York on 103rd and Fifth. 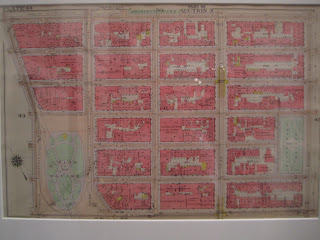 The main exhibit that I wanted to see was The Greatest Grid: The Master Plan of Manhattan, 1811 - 2011, about how the city planners came up with the plan for the grid and executed upon the plan, open until April 15th.  The content of The Greatest Grid is awesome, but the way that the museum set it up just does not work.  The exhibit is set up to resemble a grid itself, which makes sense creatively, but not logistically.  There is no clear pathway and people are wandering around without direction.  Also because of the design, it's confusing as the exhibit can jump from the 1800s to the 2000s back to the 1900s.  But, as I said, what's *in* the exhibit is pretty awesome.  The collection includes hand-drawn maps, surveyor reports, ownership records, park designs, and cool photos like this that show huge rock formations next to townhouses uptown: 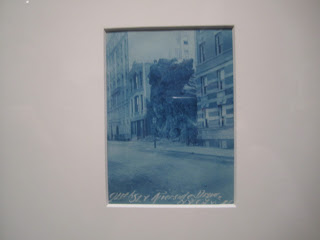 Other exhibits include:
My favorite part of the museum was definitely The Unfinished Grid: Design Speculations for Manhattan, an exhibit where urban planners and architects tried to imagine "The Next Manhattan", accounting for environmental & technological changes along with the obvious issue of 'where are we going to fit all these people!?'.  It really helped me visualize what the city will be like when I'm mayor in a couple decades.  Check out these ideas: