RG has been calling me a West Village wannabe for a few months now.  I can't help it.  The West Village is my current dream world.  I can't stop thinking about living there one day.  I don't think I'll be able to swing it with my next move, but perhaps with the next one I can get a nice brownstone townhouse on Commerce Street and live my days walking the quiet streets, wandering into small book stores, going to poetry readings, and eating at the 9,000 cupcake and gelato shops there.
So when Kat and I decided to take a Stray Boots "text message tour" through an area of the city, it was only natural to pick the West Village tour.  Some other options (which we may do another time) were the Financial District, The Met, Times Square, and Harlem.  We got together to strategize (read: gossip) during brunch at Cornelia Street Cafe and then walked to the arch in Washington Square Park to begin our journey.
The tour was basically a scavenger hunt which sent you to different places and asked you questions about each place that you had to answer in order to get the next clue.  Then the website interface would give you some cool facts about the place you just were: 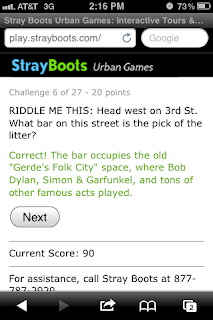 Some of the places we were taken on our tour / hunt:
The village was definitely a good choice for the tour because there is so much history there and so many small streets and corners that you may never end up going to on a normal day's walk.  Plus, it is FREAKING ADORABLE.  My second favorite discovery of the day was this awesome mural that includes four of the coolest people who have ever lived.  (My favorite discovery of the day is the ice cream further below, duh.) 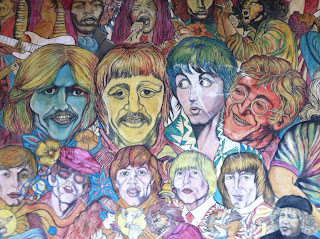 We did end up "cheating" a couple times in the game.  The first was right in the beginning when we were told to "ask a New Yorker" what NYU finance students throw at the statue of Garibaldi at the beginning of the school year.  Since we didn't know the answers as New Yorkers ourselves and assumed people around wouldn't know, we googled that it was pennies.  The second time was right after that when faced with this clue: 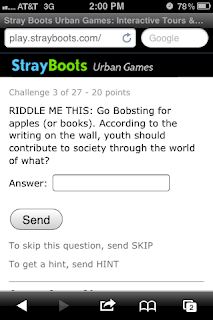 We didn't know if Bobsting was a typo or what and figured that there must be a library around the park but gave up too early in our search.  Turns out, as google told us, there was Bobst Library at the corner of the park and we walked in to find out the answer was "written wisdom".  The third time wasn't really cheating because we didn't find the answer online and still had to guess.  This clue was at the Comedy Cellar and it wasn't our fault we couldn't answer.  Stray Boots asked us how many Wayans brothers had performed there and we didn't see the apparent poster that was about the Wayans Bros and had this fact written on it.  It must have been taken down at some point after this game was last edited.
The tour was really a perfect way to spend the day.  We also took a few sidetrips on our walk:
A puppy shop where these chihuahuas were snuggling: 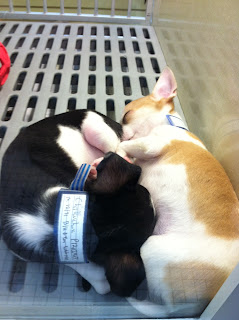 The Cones store (272 Bleeker) where Heidi Klum likes to get ice cream: 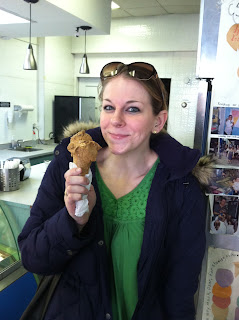 Molly's Cupcakes at the end of the day where we played real-life Words with Friends: 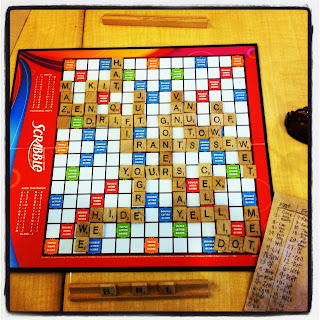 I couldn't have picked a better way to enjoy our extra hour of daylight.