I've been watching Saturday Night Live every week since I was in high school, minus a hiatus in college when I didn't have a VCR or DVR and actually had things to do on Saturday nights.  I have to completely disagree with everyone who says that it's not that funny anymore (and for some reason, lots of people say that without actually watching it).  I think the cast in recent years has been incredible (hello?!  Tina?!  Jimmy?!  Amy?!) and my favorites on the current cast are the fabulous Kristen Wigg, the adorable Seth Meyers, and my future husband, Andy Samberg (seriously, if anyone knows how to set this up, I'm down).  Every August, you can (and should) enter the Saturday Night Live lottery because SNL is such an essential NYC experience.  Somehow the odds were in our favor this year and Aubrey and I went to see the dress rehearsal last week. 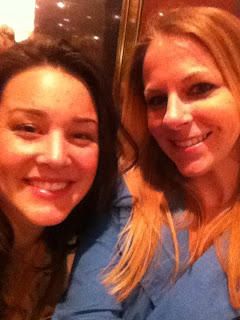 The week we went, Josh Brolin was hosting and Gotye was the musical guest.  I had to google both these guys, Josh is an actor in No Country for Old Men, True Grit, and the new MIB movie.  Gotye delivered a very poignant performance of his song, "Somebody That I Used To Know":

Jason Sudeikis came out in the beginning of the show and talked to us all about how the show was going to work and how to get out in case the studio caught on fire.  He suggested if that happened to start grabbing things off the wall since studio 8H is a historical place at this point.  He also showed us the television screens everywhere and said that with these, everyone had a good seat in the house, even though our seats (as he pointed to us) were actually not that good.  Aubrey and I were on the side, but we were more toward the middle of the side, so I didn't think our seats were that bad, but of course we couldn't see everything.  But they film skits on all sides of the studio so we definitely could see some of them pretty well.
The dress rehearsal is at 8 pm and is about a half hour longer than the actual show because they are trying out some extra skits to see what works with the audience.  I think because of this, it is actually cooler to go to the dress rehearsal than the live show, unless you are lucky enough to sit in the front area which sometimes get shown on tv, because everyone needs to get famous somehow.  It also is really neat to watch the live episode and see what they changed or what was cut.
For example, some things that changed from the dress rehearsal to the live show:
I've been to The Daily Show and to Letterman, but this show was an entirely different production.  It's really amazing to watch them put up and take down each different set and watch the camera guys and the cue card people.  It's all really impressive, especially considering how much changes in the hour and a half between the rehearsal and the live show. 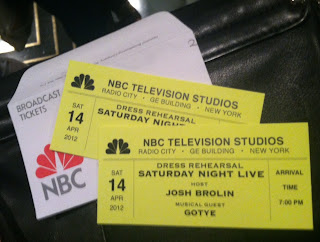 If you can't get lucky with the lottery, there also is an opportunity to get standby tickets.  I don't know exactly what it entails, but it seems as long as you get to the NBC studio early enough Saturday morning, you can get in pretty easily.  I'm basing this on eavesdropping as this woman nearby said she had tried and succeeded six times in the standby line.  She's just somebody that I...used to know.
xo