A Poem Lovely as a Tree

In an ideal world, this entire entry would be written in verse, but I am sorry to tell you that it is not an ideal world and I am no Emily Dickinson, although when I was I was nine, I sure wanted to be. I probably have mentioned this before because I think it's hilarious, but I spent a good part of my childhood wearing a black turtleneck with a musical note pin and a red French beret. I spent hours writing poems in my Lisa Frank notebook and then erasing them and rewriting them in nicer handwriting (like with open circles as the dots to my i's rather than plain old regular dots). I even won a contest in primary school when I wrote a poem about how "Reading is Fun (for Everyone)". Basically, I was a really nerdy cool kid.


I was happy to receive Brad's suggestions for my 28 Things list, and the one I was most excited about was to go to a poetry slam. This event is something that I probably would not have thought to do on a normal night but really, because of my childhood dreams, made a lot of sense for me to try out.

So on Friday, Brad and I met in the East Village around 8:30 and walked to Nuyorican Poets Cafe on East 3rd Street between Avenues B and C. This venue held the first poetry slam in NYC 40 years ago and is still going strong. The event didn't start until around 10 but we needed to get there early to ensure we would get in and get seats. There was a separate line for reserved tickets but from what I saw online, it looked like those tickets were $20 and ours were only $10. We got in, got seats in the back, and were ready to go. 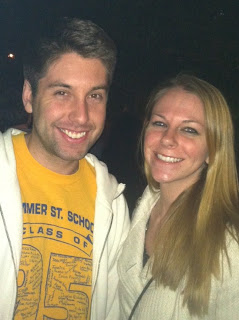 What *is* a poetry slam, you ask? I wasn't too sure of it myself, I thought it might be similar to a rap battle. The rap battles in my mind are from 8 Mile where people come up with raps on the spot to trash-talk others in the competition and then they battle back and forth and talk about each other's moms. Turns out it is a competition of prepared poems by a bunch of different poets instead.

The night started out in a similar manner as a stand-up comedy show. Host/SlamMistress Mahogony Browne came out and asked everyone where they were from and got us all to stand up and dance so that we would have enough energy for the poets to feed off of. She also went over how important it was to support the poets and talked about the "Ooo"s and "Ahh"s and "Wowwww"s we could say to show them how much we were enjoying their performance. 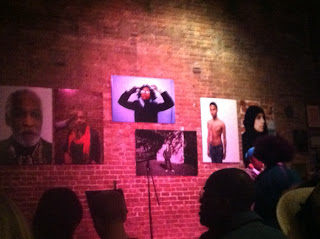 Poet Kendrea Mekkah who also runs this website performed five of her own poems as a showcase before the slam started. Then two "house poets" each performed a poem as a barometer to show what kind of performances deserved good ratings. There were six or seven randomly chosen judges scattered throughout the audience who had to rate every poem on a scale of 1 - 10 and then the top and bottom scores were dropped. Then, the slam began, with six poets each performing three times, with a woman whose name I never caught winning and making it on to Nuyorican's national slam team. I feel bad that I don't know her name, but she did say this verse that I really liked:

"Women are silly and emotional. If you find a woman who is serious and emotionless, she is insane."

Each of the poets did an awesome job. To be able to write the poems, memorize them, and perform them with the passion they all had was really impressive. The topics they chose for the most part were a lot deeper than anything I've had to suffer through, thankfully/knock on wood, and topics which I don't wish to venture into on this blog. But, suffice it to say, I got chills during some, teared up a little (surprise surprise) during some, and laughed during some - when appropriate, of course.

I only wish I had worn my beret.