Wear Two Socks (in case you get a hole in one)

One of the thousands of things I love about NYC is that people have really thought about what city life is missing and they've developed places for city dwellers to experience the joys that suburban life holds without having to drive over a bridge or through a tunnel (the horror). For example, the city developers way back when deciding that Central Park needed to be in existence, or the offering of kayaking on the Hudson, or the sports facilities available at Chelsea Piers. It's been on my to-do list (although no one suggested it for my 28 Things list) to go to the driving range at Chelsea Piers for quite some time.

My golfing experience can basically be summed up in three bullets:
Last Sunday, I was hanging out with Nicole and Dave when Mendy called and wanted to play. We couldn't think of anything to do and settled on just meeting up in Chelsea. Mendy had suggested the High Line but I boycotted that because I had already been there twice that week. By the time we got down to Chelsea, Mendy had decided on the driving range at Chelsea Piers and we were all for it. Mendy and his friend Scott put our name in but we were around number 80 and the next one up was still in the 40s so we sat outside and chatted for a while, threw a football around, and tried to get a dog on one of the boats to bark at us. I also called my dad for some tips and to wish him a Happy Father's Day (mostly to wish him a Happy Father's Day because I knew I wouldn't remember the tips by the time we were called). We also went into the Golf Club and ate some free squash and sweet potato chips and drank some free soda. There was some sort of viewing party for the US Open and we wanted in on the goodies.

Our turn finally came and we were sent up to the second level of the driving range. Mendy gave me a quick lesson and I have to say, I actually didn't do *too* terribly. I used to go to the driving range every once in a while with my old man or my Allie Bear. My main problem on Sunday was that I would bend my knees but as I swung back, I would stand up straight again. There were also a few times I wasn't gripping correctly and I would hit the "green" instead of the ball but that just really meant I got an extra swing, so go me! 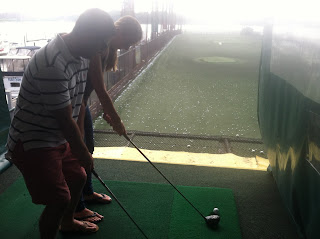 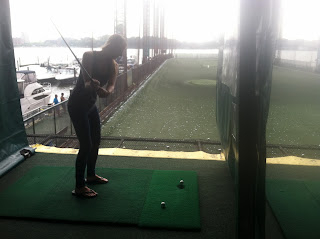 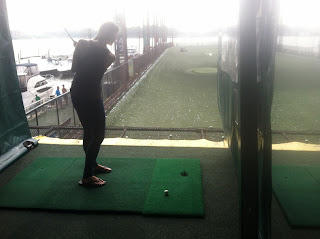 We had purchased $50 ball cards and I got one $5 card for free for checking in on Foursquare (see! it has benefits!) so we had about 200 hits between the five of us and took turns. It worked out pretty well, each of us hit five at a time and while I could have swung more at the end of it, I was also ready to go get some grub at Chelsea Market: 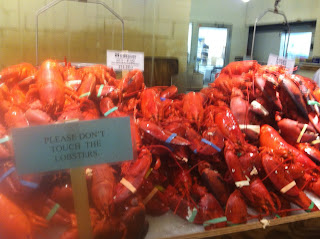 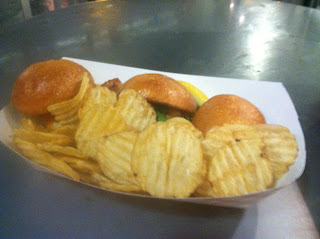 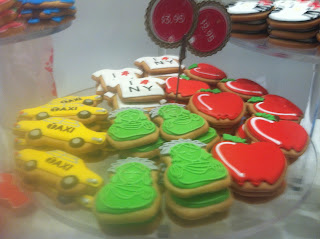 We finished the day off at a friend's apartment's amazing rooftop which made me (a) really jealous and (b) really proud of my beautiful city! That weekend was my three-year anniversary of moving to the NYC area and it was a nice nightcap to an incredible three years of living here. I don't know what I would do without New York. (Yes, Stumbles, you can tease me about that line.)