Dying is Easy, Comedy is Hard

NYC is expensive. No one will argue this, especially not me as I just signed a new apartment lease (yay!). But, just as I believe the city tries to make up for urban life by bringing us suburban experiences, it also tries to make up for the cost of living by offering tons of free events. One of these free events is every Sunday night at Upright Citizens Brigade (UCB). Another is Summer Stage in Central Park, which recently featured UCB.

One of Kater's suggestions for my 28 Things list was to go see a show at UCB, a theatre in Chelsea and also the name of the comedy/improv group that started the theatre. Many SNL, 30 Rock, and Office stars have passed through their doors. UCB offers comedy and improv shows every night of the week and has a training center with improv and skit-writing classes. I've wanted to go to UCB for a while and finally had a reason when I put it on my list. 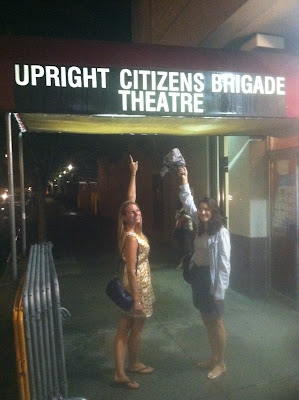 #8 Go to a show at Upright Citizens Brigade


The Sunday night show at UCB is called ASSSSCAT 3000 (I have no idea why) and I was told to try and get there around 7 to stand in line to get tickets for the 9:30 pm show. Aubrey and I probably got there around 6:45. There is also a 7:30 show but you need to buy tickets in advance for it and it looks like they sell out quickly. We picked a pretty miserable day to wait in line because I was recovering from a bellini-filled bridal shower that afternoon and it was about 100 degrees out, but we had a fabulous time as we usually do. After Aubrey and I got bored with catching up, playing many rounds of "would you rather", and listening in on phone calls of people complaining about being on the west side, we decided to strike up conversation with the lads behind us (Nathan & Matt) who we ended up hanging out and laughing with the rest of the night.

At 8:15, a woman handed out the tickets and when they got to the girl in front of us, she ran out. I'm sure I looked like I was about to cry after all that wait time. She asked Aubrey and I how many were in our group and we immediately disposed of our new friends and said "Just two! Just us!" She then said, "Usually I have five more tickets so just line up and come back with everyone else." Of course paranoia arose and I was nervous that she wouldn't recognize us or that someone else would be at the door, but she assured us that all four of us, including our new friends, would be fine. We dubbed ourselves "The Overflow Five" (the fifth member is a mystery) and went to grab some food together and discuss the dangers of dolphins.

We got back in line around 9:15 and huddled together as it poured harder than it has all year. The weather gods certainly were against us that day. We almost didn't get in because the woman who told us she would remember us did not immediately and she tried to send us to the standby line. "But we're 'The Overflow Five!!!'" we all exclaimed and she let us in, either because she remembered or because she thought we were cool for having such a great name and presence. 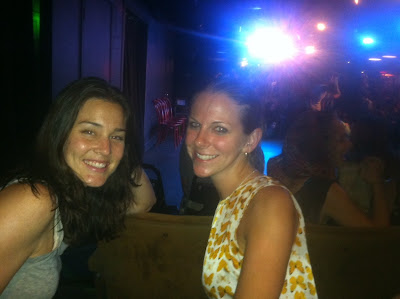 The show was AWESOME. We had a few regular UCB members as well as Zach Woods (Gabe from The Office) and Bobby Mohniyan from SNL. Two UCB members came out to work the crowd before the show began and were asking for stories from the audience about crazy things that had happened to them that week and then made jokes from those. When the show actually started, UCB member Ilana Glazer was responsible for associating stories with audience suggestions of topics. The other members would then improvise various skits from the stories that Ilana said. They ended up going in 10-15 different directions with ideas that were triggered by Ilana's stories and then Ilana would tell more stories about what something in the skit made her think of and the group would continue from there. After a brief intermission, it started all over again. Their skits included a frat party, a meeting of the Allied and Axis powers, and a fight between Staples and Office Max employees.


The next Tuesday, UCB was performing at Central Park's Summer Stage. Nathan and I went after work and Aubrey met up with us afterward. This show featured some of the same players as the Sunday show, including Bobby Mohniyan, and also added Scott Adsit, Pete from 30 Rock. The part of Ilana was played by a radio DJ from Hot 97 who name-dropped at every chance he got. From his story about going to Ikea with Eminem, the performers got into a skit where they were customers in Ikea who were being hunted by a Swedish worker and who couldn't escape because you had to build the exit yourself. There were also many scenes that included vomiting at amusement parks and celebrities using humans as chairs. 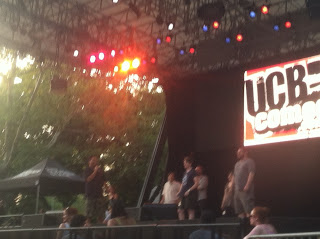 It was all really cool to watch how everyone's minds worked to come up with the skits and to see how everyone reacted to each other's performances. As would be expected, the skits go in a completely different direction than the person who started them intended. It was funny to watch them laugh at each others suggestions and then have to follow their leads without knowing what was next. I imagine it is quite difficult as it always is when you don't know what's in the future. At least I know more UCB shows are in mine.