Harry Potter and the City that Never Sleeps

I didn't anticipate when I started this blog that I would actually have a Harry Potter label as a way to organize my posts, but after the third blogpost about HP, I figure it's actually useful. After all, in NYC I have experienced THE QUIDDITCH WORLD CUP and a display of props and costumes from the movies at Discovery Times Square. I've referenced HP in random posts, because he has played a big part in my life over the last fourteen years (including when my frousins and I performed spells on each other during one of my cousin's weddings years ago, yup). I have also of course seen the last three movies in the city and even wore this awesome t-shirt during the last one:

"Potted Potter - The Unauthorized Harry Experience" is an off-Broadway parody by two actors who go through the entire series of books and movies in one play. This was enough for Kat and me to want to go, although I think we paid more than one should for something like this. We went to the show the last Tuesday in June and saw a lot more kids there than I expected. Because I consider myself a full-grown adult and don't think anything strangely of me liking Harry Potter as much as I do, I sometimes forget that the HP series is actually for children. I thought the parody would be a little more adult-focused but some of the humor was very obviously for the easy laughs of the children.


I also thought the show would be just two guys acting out all of the books quickly, but it was more that they were acting out that they were acting it out, if that makes sense. Jeff was the HP expert and Dan was his friend who was helping him put on the play. They discussed on stage how they were going to act everything out and Dan "forgot" to get other actors and spent all of his money on the dragon in book 4 than on the rest of the set and the props - and the dragon (spoiler alert) ended up to be just a stuffed animal. The set Dan prepared contained a desk, a large colorful train for the Hogwarts express, a painting of a tropical scene with words on it saying "Forbidden Forest", a wardrobe "to get to Narnia", and a coffin. It became clear that Dan had no idea what he was doing.


The best part of the show was when we played a game of Quidditch in the audience. I had certainly never done that in a theater before. I wish I had volunteered to go up on stage and be a Seeker because really, when am I going to be on stage anytime soon, but they selected kids anyway so I probably sadly wouldn't have been chosen. The audience was divided into Gryffindors and Slytherins. Kat and I were Slytherins because you can't spell Slytherin without ERIN. A beach ball globe was thrown into the audience, goal posts were revealed, and fans came on to help the ball stay in the air a little better. Eventually, Jeff came out dressed as a snitch and the Gryffindors won because their Seeker fought a little harder to tackle him than ours did. 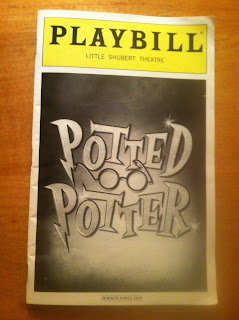 Potted Potter is only playing in NYC until September 2nd so if you want in, get your tickets now. You should definitely check it out if you are a huge HP fan and feel a void in your life without new books and movies and have already been to the Quidditch World Cup and to The Wizarding World of Harry Potter in Orlando, and have nothing HP-related to look forward to. But now what do *I* do to fill the void?