"Oh, what a wonderful day was Saturday in Brooklyn." ~ A Tree Grows in Brooklyn, Betty Smith

On Saturday, Caitlin, Tracy, and I met up in Brooklyn to eat our faces off. We went to the "Smorgasburg" flea market for artisan food vendors in Williamsburg, open on Saturdays all summer. This was another suggestion that was repeated by a few people for my 28 Things list, but I am counting this as one of Caitlin's since we went together. 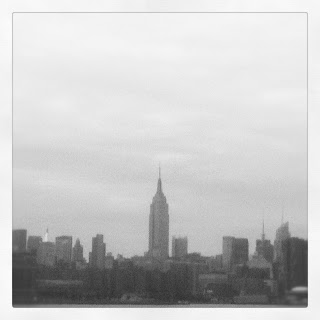 #7 Go to Smorgasburg in Brooklyn

Caitlin is one of my closest and foodiest friends so it makes sense that the majority of her suggestions for my list were food-related. Those who I hang out with the most all came up with several awesome list items and there are a few repeat suggesters on my list because of this. I am really looking forward to one of Caitlin's food challenges in particular, to come later this year.

The girls and I met up at Bedford Ave off the L line around 10:45. Smorgasburg opens at 11 and we wanted to make sure we were there before the lines got insane. The day was somewhat gloomy, but it was perfect weather for eating outside. There were about 70 awesome food vendors to choose from but I tried to pick just a few so that I can still pay rent. I'm not the best at describing food, but I will do my best.

For breakfast, I chose a mini brisket sandwich from Mighty Quinn's BBQ, mostly because Caitlin was raving about this BBQ all week. This vendor is one of the most popular at Smorgasburg so I had to give it a try early on and the mini sandwich was a perfect size for me. The man preparing the sandwiches was using two different cuts to get a good mix of lean and fatty meat. The brisket certainly was messy, but very delightful. 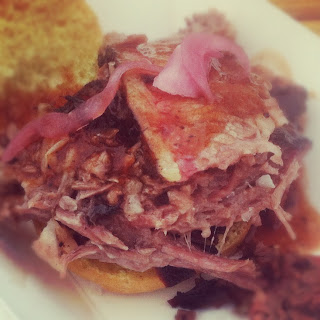 One of my favorite food discoveries since moving to NYC has been fried chicken and waffles. I've even (now embarrassingly) been known to create my own with chicken patties, Eggo waffles, syrup, honey, butter, and applesauce (I'm quite the chef...). So I definitely had to try the Buttermilk Channel's fried chicken and cheddar waffles with watermelon salad. I had this incredible dish for my lunch just a little while after my brisket breakfast. 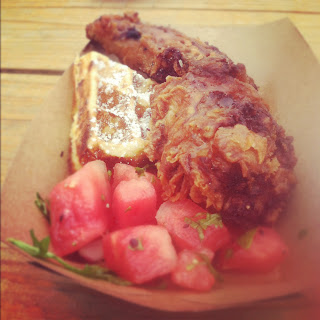 For dessert I chose a yellow peach and basil popsicle from People's Pops. They also do shaved ice there off a huge block of ice but the flavors looked a little too sour for my tastebuds. The popsicle was a good mix of flavors and very refreshing. 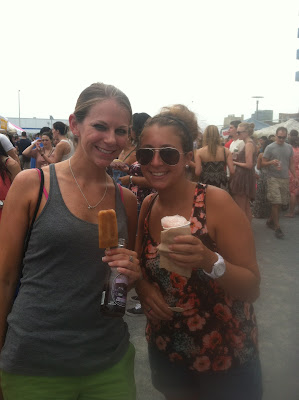 We walked around Brooklyn a little bit more, going to a non-food market, a famous meat store (Meat Hook), playing with tons of "adopt me" puppies on the street, AND stumbling upon places featured in "A Tree Grows in Brooklyn" which I've been rereading on the subway, including on the way *into* Brooklyn which made me feel pretty awesome.