Many of my friends had more than one awesome suggestion for my 28 Things (to do before I turn 28) list, and Kater has the honor of being the first duplicate suggestion-maker (this is akin to being the most decorated Olympian in my world). She also happens to have two suggestions in a row, as she is who I have to thank for the Upright Citizens Brigade show (and I am now on 4 UCB shows and counting). Kater’s second suggestion on my list was to go to a book signing, which she said could be “weirdly inspirational” and she was absolutely right.

I originally put this item on my “maybe” list just because most of the writers I would want to see are either a) celebrities and not actually "authors" (i.e. any of the NY or NJ Real Housewives) or b) deceased (i.e. J.D. Salinger). But when Aubrey told me that the author of the book I was reading was coming to the Union Square Barnes & Noble, I moved this item onto my “must do” list.

I don’t read as much as I should but definitely read more in the summer because reading outside is THE BEST (ideally on the beach in a chair on the cusp of the ocean although I will settle for Central Park if I must). When I was home for 4th of July, I read my mom’s Oprah (what up Oprah) magazine and saw that she had restarted her book club with “Wild” by Cheryl Strayed. The author’s life sadly fell apart after her mother passed away in her early twenties and in order to find herself again and get herself back on track, she went on a solo hike of the Pacific Crest Trail for three months and wrote an incredible memoir of her life on the trail. I read the article/interview in O! and instantly added it to my to-read list. (I love lists…) Later that week, I saw that Aubrey had read the book and loved it and the following week at Smorgasburg, Caitlin mentioned that she had also read it and that I needed to as well. Who am I to deny the advice of Caitlin, Aubrey, AND Oprah? 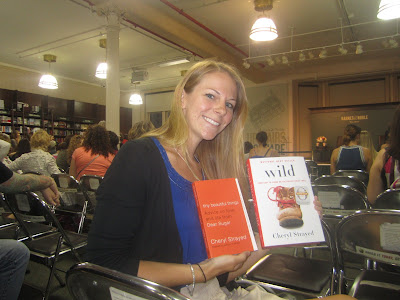 In addition to writing “Wild” and an earlier novel, “Torch”, Cheryl has recently been revealed as the advice columnist of “Dear Sugar” on the website The Rumpus. Her newest book, “Tiny Beautiful Things” is a collection of these columns, her beautifully written and incredibly moving responses to people in need, reaching out for help.

The event was moderated by journalist Katherine Lanpher and accompanied with performances by Theo Bleckmann. I really enjoyed hearing Cheryl talk about her writing and her experiences. She spoke about how people she had met on the trail had written to her since the book came out or how one person had brought her foldable saw from almost 20 years ago to one of her book signings. She talked about how she got into writing the advice column, how she picked what to respond to, how there are really only five problems people are dealing with (including the ultimate question of our twenties, “I don’t know what I should be doing with my life”), and how she felt about losing her anonymity of writing the advice column and how she could no longer, as Cheryl Strayed the author, tweet Dear Sugar and vice versa. 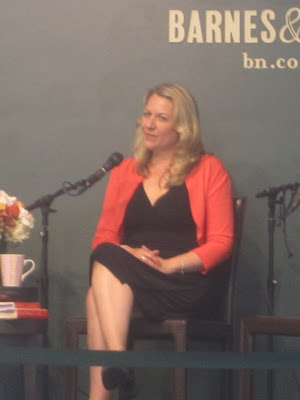 During the evening, Cheryl read an excerpt from the prologue of Wild as well as two excerpts from “Tiny Beautiful Things.” Her words gave me absolute chills as she read aloud her response to someone needing advice about his addiction to prescription drugs. He was fearful to get help as he knew that in his small, conservative town, everyone would be aware of his problem. Cheryl read aloud an excerpt of her response, a recounted story from when she and her then-husband kept hearing noises coming from their ceiling for weeks. They eventually decided to find out what the sound was and destroyed the wall and found two emaciated kittens who had been stuck. Cheryl related this story back to the letter-writer in that she and her husband waited until the sound was so loud they had no choice but to find out what it was and also that the kittens persisted through their meowing and saved themselves, by being willing to be helped.

Her words later filled my eyes with tears as she read the last letter in her book, responding to a letter writer who asked Cheryl what advice she would give herself in her twenties. Listening to successful people giving themselves advice at an earlier age is so comforting to me. I know I’m not the only person who feels like she is supposed to have it all figured out by now and who feels like she should already be some sort of huge success and who feels a little lost that she is not yet famous or renowned for *something*. It’s nice to know that all of these successful people were similar to me at some point in life.

I didn’t really know what to say to Cheryl when I got my books signed, so I blurted out that I had bought another copy of “Wild” since my original copy was “seasoned” from being read on the beach and being shoved into my bag every day for my commute. I then told her that she made me tear up while reading her excerpts from “Tiny Beautiful Things” and we talked about how I should read it in my bed with some tissues. I wanted to thank her for her words and inspiration or maybe even to mention that I am an aspiring writer myself but I didn’t get that all out. 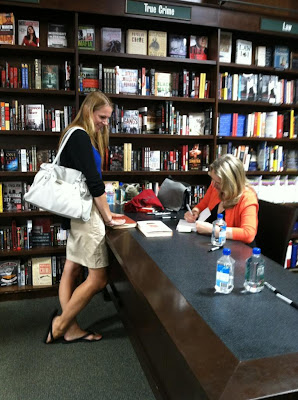 Aubrey and I walked the two miles home from Union Square on that hot summer night, stumbled upon a Gossip Girl filming, looked up what the colors on the Empire State Building represented, and talked extensively about how lucky we are to live in New York City and to be able to experience all these “tiny beautiful things”. 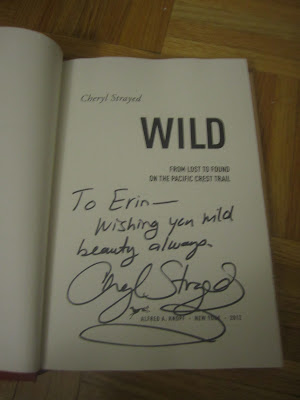 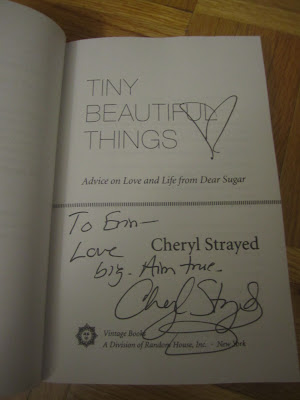 I saw that Cheryl was responding to people on Twitter the other night so I wrote her saying I was going to be writing about seeing her as part of my list. She responded: 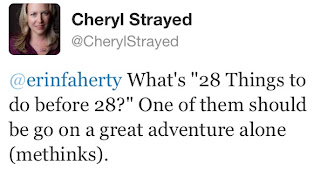