How I Met Ted Mosby

Okay, well, I didn’t meet him, per se, but I did see him. And okay, well, of course I didn’t see him per se, but I did see Josh Radnor, the actor who plays him on How I Met Your Mother. In addition to being Ted Mosby, Josh has acted and directed in two Sundance-acclaimed films, “happythankyoumoreplease” (which I really enjoyed and you should all put into your Netflix queues) and “Liberal Arts” which comes to theaters this month. I found out on Twitter that Josh was speaking at the Soho Apple Store in their “Meet the Filmmaker” series on Wednesday and I decided to go check it out.

The event was similar in set-up and feeling to the book-signing I attended as part of my 28 Things list in that it was again “weirdly inspirational” as Kater mentioned when she made her suggestion. I didn’t get over the thought of “this is Ted Mosby talking to me” because Josh is actually very Ted in his actions and words. Josh is definitely an intellect (talking about books, classical music, and crop circles) and I can especially see the comparison when thinking about Ted rattling off “Empire State Building Fun Facts” or about when he is endlessly correcting people, being such a smarty too. Josh mentioned how he investigates and judges people by their book collection which is also something I see Ted doing – I know I certainly do this when I go into their apartments for the first time (you have now been warned). 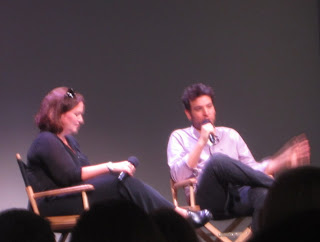 The basic plot of “Liberal Arts” is Radnor as a 35-year-old character named Jesse who returns to his alma mater (which happens to be filmed at Josh’s alma mater) and then falls in love with a 19-year-old sophomore played by Elizabeth Olsen. Two professors in the film are played by Allison Janney and Richard Jenkins and Zac Efron makes an appearance (I *love* me some Zac Efron).

Radnor said that he wrote “happythankyoumoreplease” to give himself a good acting role on screen and that it developed into a directing role as well. He realized how much he loved directing and wanted to do more of it. He compared acting to just playing one instrument in an orchestra and directing  to conducting and being able to play with all the instruments at the same time. He said the concept for “Liberal Arts” came about as he was thinking about how he was getting older without planning on it and was realizing that he was at an age where he was twice as old as students in college and wanted to explore that feeling in a film on a college campus.

Radnor showed a clip from the movie in which his character and Elizabeth Olsen are discussing a vampire book (most likely Twilight) and his character thinks the book is stupid and terrible and poorly written (as do I…). She responds by saying that people should talk about what they love and keep quiet about what they don’t. This is a concept I’ve heard, liked, and told myself many times, but I’m still working on it - sometimes it is just too fun to talk extensively about what you don’t like, but it’s really not the way to go. 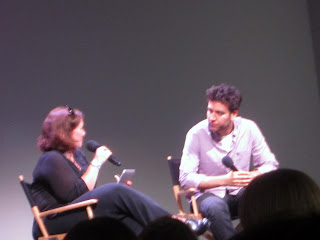 There was an audience Q&A after the moderated question period which got pretty deep. Josh further discussed the idea of wrestling with growing up and aging in the context of his film. He addressed the trend of “extended adolescence” and “man-boys,” or men in their twenties and thirties who still act like they are children by asking everyone if anyone actually felt like an adult and poignantly only one person raised his hand. Josh said he usually writes about people who are mid-climb in the mountain of life and success rather than being at the bottom or the top of the mountain. He talked about how depression seemed to be a first-world luxury of people who didn’t have real things to worry about.

When asked about how to get creative ideas to fruition, Josh suggested making sure that you are working on a series of little tasks rather than writing a full book all at once, a concept from Bird by Bird. He mentioned the Buddhists define enlightenment as doing just one thing at a time, which I think is one of the hardest things for people nowadays to do with all the constant attention needed from texts, Twitter (follow me?), Facebook (like me?), and dog-shaming.com (you’re welcome). I really liked when Josh talked about how creative people start more things than they finish and that you just need to focus on the ideas that are demanding to be finished. He quoted another writer saying “Every project is a race against your own enthusiasm for it” which is the best description I’ve heard of creative work in a while. It is so hard to finish big creative projects while you’re still excited about them.

Lucky for you, I’m still excited about a hell LOVE a town and taking it one task at a time.

{Check out the podcast from iTunes right here.}