Quiet! This is a Library!

Libraries and I have a good thing going. When I was younger, I would beg my parents to take me to our township library almost weekly. Our local librarians were just like Lori Beth Denberg in All That in that they were loud, obnoxious, mean and they also always made me pay extra money when I lost my library card every few months, but I loved going there. Whenever I cleaned my room I would find five way overdue library books under my bed. Katie, Jessica, and I would frequently set up our own library with all of the books we could find in the house and play different absurd characters who all wanted to borrow books (we also had a similar game with a hotel, I believe it was called Potamia Casta Hotel) – we were pretty awesome. Junior year of college, I got a job in the library computer lab and became great friends with Caitlin of amour fou(d) while we got paid for gossiping, doing our homework, and surfing the web.

But up until last weekend, my relationship with the New York Public Library was basically nonexistent, aside from the card I carry with me on my keychain, which I was excited to get but have been hesitant to use. I think I was just a little too intimidated to go inside and explore even though I love walking by the NYPL main building right next to Bryant Park. I think the building is beautiful and I’m kind of obsessed with statues of lions – these particular lions are named Patience and Fortitude. These photos were taken on the day after Christmas, 2010. 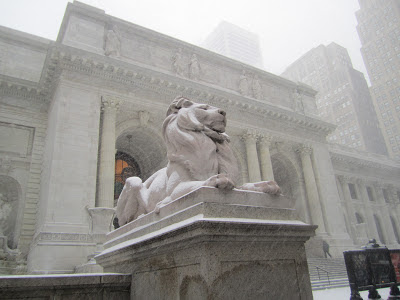 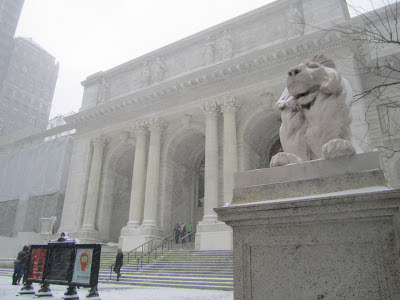 Last weekend, Katie and I skipped out on Saturday brunch and went to the NYPL for one of their free building tours, 11 am and 2 pm on Mondays – Saturdays and 2 pm on Sundays. The Bryant Park location of the NYPL is considered the “main branch” but is also called the Stephen A. Schwarzman Building. You can only take books out here in the Children’s Center, the rest of the books here are for research purposes, specifically in the Humanities and Social Sciences. They are going to be changing this in the next few years and making this location a circulation library. There are lots of reading rooms, special collections, and historical items, such as an original copy of the Declaration of Independence in TJ's handwriting that is displayed during July.

The Periodicals and Microform Reading Room: 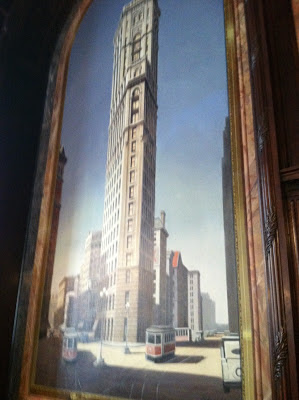 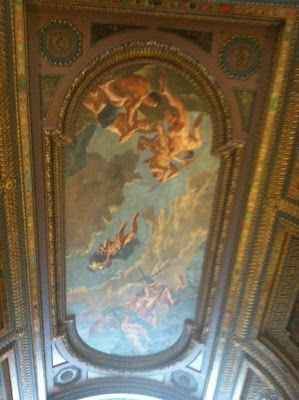 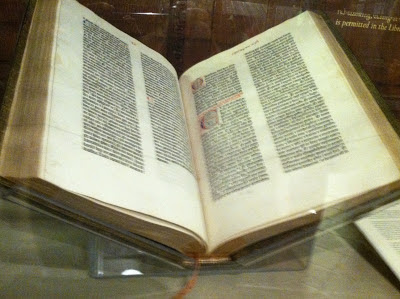 My favorite part of the library was the Children’s Center for a very exciting reason. Winnie the Pooh, Eeyore, Tigger, Kanga, and Piglet, the original stuffed animals that inspired A. A. Milne’s books are on display. I LOVED anything related to Pooh as a kid. I had about 25 Pooh key chains on my backpack and my first website ever was called “The Eeyore Page”, established in 1996, when I was 10 or 11. 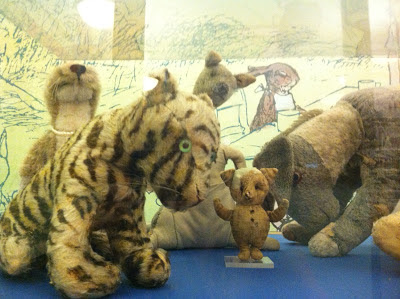 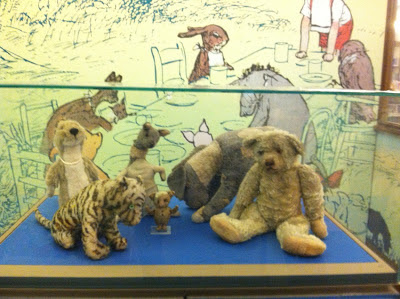 There were a few special displays while Katie and I were there – a room about the characters of Charles Dickens (I don’t actually think his characters are as good as Katie’s, Jessica’s, and mine while we were playing “Library” as kids) – and a Lunch Hour NYC exhibit which we skipped out on because we were too hungry at that point to look at old photographs of people eating when we had deprived ourselves of that so far that day.

Our tour was a little adapted because there was a wedding taking place later that evening and people were setting up for it. I will forgive them because I will get to see the rest of the library when I have my wedding reception there, at some point in the future. You’re all invited.