Once Upon a Time

I've been really into stories lately - I have been listening to the podcast of This American Life more than the new Taylor Swift album, making my mantra "Do it for the Story" (as inspired by Girls on HBO), and thinking about what story I would tell to Alex after the first commercial break if I were ever to make it on Jeopardy.

The Moth is a weekly storytelling event at different bookstores/bars in the city and Brooklyn. Moth events are also held in other cities - LA, Milwaukee, Detroit, & Boston, to name a few. A topic is given for the night, ten people who submitted their names are randomly chosen, and each storyteller has five minutes to share their true tale. The stories are judged and a winner is crowned.

When Davesh first suggested The Moth as part of my 28 Things list back in the spring, I hadn't heard of it before and honestly didn't think much of it, but did put it on the list. A few months later, I saw a - you guessed it - CBS Sunday Morning clip about Storytelling, where they dubbed it "the oldest art form," which featured the Moth, and I then got excited for this item. 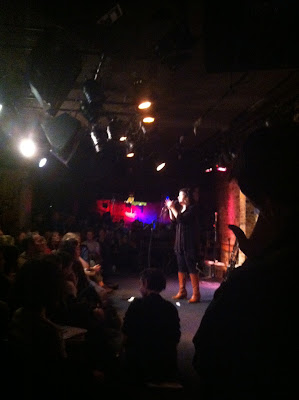 This particular Moth event was at The Bitter End last Thursday night. Davesh had warned me to go as early as possible because it would be crowded, but as I am no stranger to long lines for my 28 Things list (UCB, Poetry Slam), I wasn't too concerned. I thought since it was an off week during the holidays, people might be out of town or that it might have been too cold for people to want to wait outside. I was originally planning on going by myself but at the last minute recruited my friend David to come with. This turned out to be a fab idea because we had to wait in the freezing cold for an hour and a half, many corners away from the door to the Bitter End on Bleeker. I probably would have quit without someone to gossip with.

I almost had another 28 Things fail (there have been two so far), because when David and I finally got to the front, the gentleman running the door stopped us and said "this is it for right now." My heart dropped a little bit but I kept a smile on and ten minutes later, he let us and a few more people in, right before the event started. We had to stand in the absolute back near the bar, but during intermission, we made it up more toward the stage.

Our night's theme was "The Aftermath." There were three stories that I enjoyed the most - one about the aftermath of a girl who accidentally peed in her boyfriend's bed and covered her tracks completely, one about the aftermath of a job interview, and one (the winner of the evening) about how after the storyteller had his daughter, he realized how awful his own parents had been. I liked the actual flow of these three stories the best, there were a few that seemed a little too rehearsed, as if the storytellers were making a speech, rather than sharing a story. It did seem like everyone had some experience. I feel like if I ever got up there I'd be shaking like a Polaroid picture. I was impressed with everyone's ability to be so open and share such personal stories and to do it so well. After the ten chosen ones were finished, everyone else who entered their name was invited to come up and say the first line of his or her story, which just left me wanting more. If the event had kept on going and if I had had a seat, I would have stayed for a few more hours, no question.

I loved the Moth. Next time I'll try to get tickets online beforehand to avoid the line and standing, but they seem like they go pretty quickly. As soon as I got home I started to think about which stories I might have enough courage to tell on stage. Of course it would depend on the theme, but I could see myself putting my name in the ring at some point, even if I would be a little shaky. Maybe before I'm 30.

If you're interested in hearing actual Moth stories, there is a Moth Podcast and it is amazing.
Search for it on iTunes or listen to the Moth radio hours here.