It was 9:00 am, in Chiang Mai, Thailand, and I had "first date" jitters. You know what I'm talking about, where you're nervous about if you're even going to recognize the guy you're supposed to meet up with, if you're going to mess up and say something stupid, and what you're going to do when the check comes. But I didn't meet any guys in Chiang Mai (unless you count the old guy who thought I was my older sister’s mom) and that wasn't on the agenda for the day. I was going to meet elephants. I couldn't shake how strange it was that I was *that* nervous to hang out with animals for the day and, on the hour-long ride to Baan Chang Elephant Park, I kept picturing what it would be like if elephants could actually go on dates. I was imagining meeting up with an elephant at the bar, elephants sitting on stools and drinking martinis, and elephants hanging out at the bowling alley and walking across the Brooklyn Bridge, hand-in-hand. In my defense, this was only my second full day in Asia and I was a little jetlagged. Stay with me here. 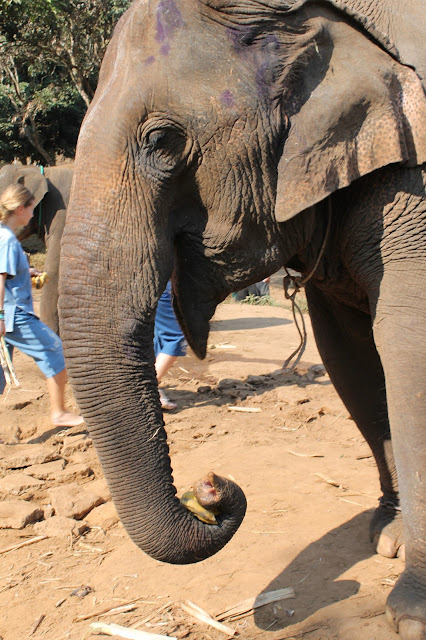 The first thing my sister, Katie, and I talked about when we decided to go to Asia was that we both wanted to hang out with elephants. It was also the first thing I bragged about after telling people I was going – as if everyone had the same obsession as Katie and I did. Katie and I were on four flights and spent the night in the Hong Kong airport before we reached our first destination. We didn't sleep much and we were both pretty cranky but we kept saying to each other ,"Okay, this is really awful right now, BUT we are going to be playing with elephants in a day and a half," and that made everything all better. 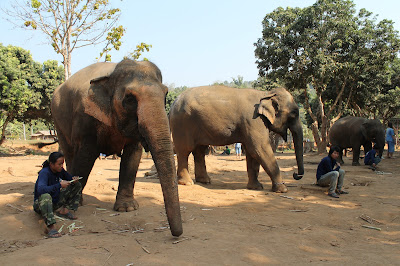 After some deliberation on other camps, we decided on Baan Chang for a few different reasons – the chance to be elephant trainers (mahouts) for a whole day, that we could ride the elephants without wooden stands on their backs (which are bad for them), and the cool double-denim outfits they made everyone wear in the photos on the website (this sadly was a serious decision-factor). 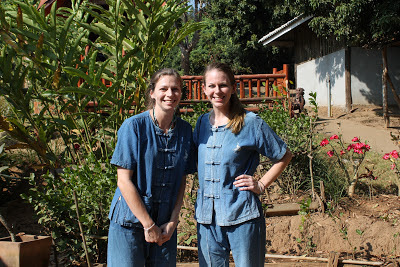 The first thing we did when we got there was freak out – oh wait, no, that was just me – everyone else somehow remained calm as we got out of the van and could see all the elephants looking all cute, glowing in the sunshine with just the jungle in the background. We learned a little about the elephant park and elephants in general and what we were going to be doing that day, but I could barely pay attention. I am not known for my patience, so after what seemed like four hours but was probably only 15 minutes, we got to approach the elephants for the first time to feed them bananas and sugarcane. Our guide joked that people sometimes think you have to open the banana peels for them and I wasn’t ashamed to admit I had thought that very thought, but it was pretty obvious once we got up close that these guys were not picky eaters. I was very cautious at first as to not startle them, as if I thought they would react to me like elephants in cartoons react to mice that scurry by unexpectedly, but I got used to it quickly. 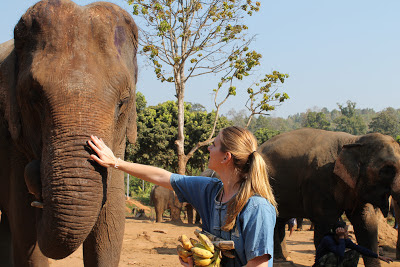 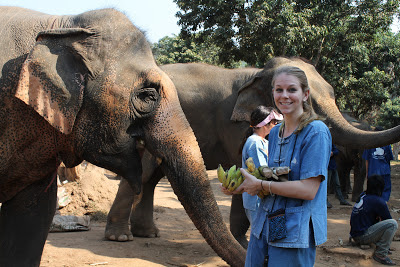 It was so amazing to be standing that close to something so big and so unlike myself. I realized then that my experiences with animals had been limited recently. I hadn’t even been near horses since I was 12 and of course no puppy dog I meet on the street is anywhere near an elephant’s size (thankfully, that would be a shame to keep in a New York City apartment). I know the elephants probably only knew some words in Thai, but I felt the need to talk to them in English and tell them how wonderful and beautiful they were. 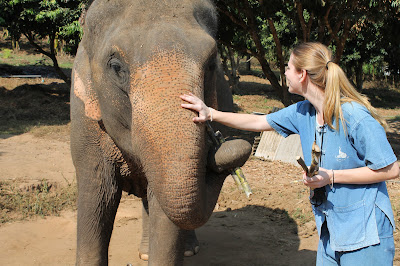 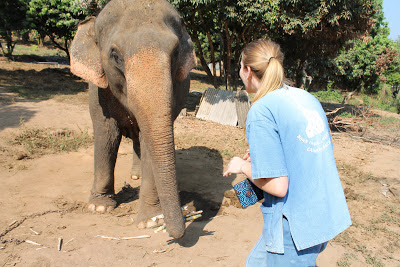 The next part of the day was the actual training. We were going to learn how to ride and control these bad boys. The pressure was on. Two elephants were brought over to our group and we learned the Thai words we needed to know. Now, this was only our second day in Asia, and it ended up taking me at least five days to learn how to say “Thank You” in Thai with confidence, so I may have struggled a bit. For example, to get on the elephant, you say something that sounds like “Non Lu-ang” which I kept saying as “Non Lon”, “Non Loong”, and “Non Lang”, anything but what I was actually supposed to say. It came time for people to practice getting on and off the elephants and when it was my turn, I’m sure I was visibly shaking. I got on alright but then when the elephant stood up, I panicked. I had this vision of her suddenly dipping her head down and me sliding off her head somehow – but these elephants weren’t doing *anything* “suddenly”, it takes them a while with the three tons they’ve got going on, so this fear was unreasonable. 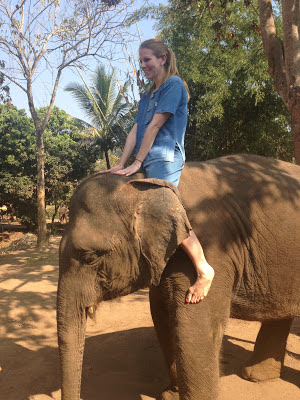 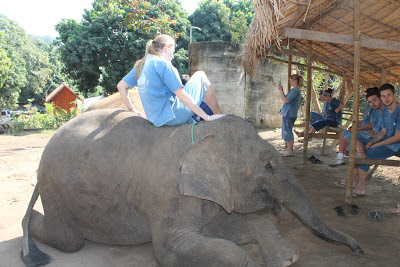 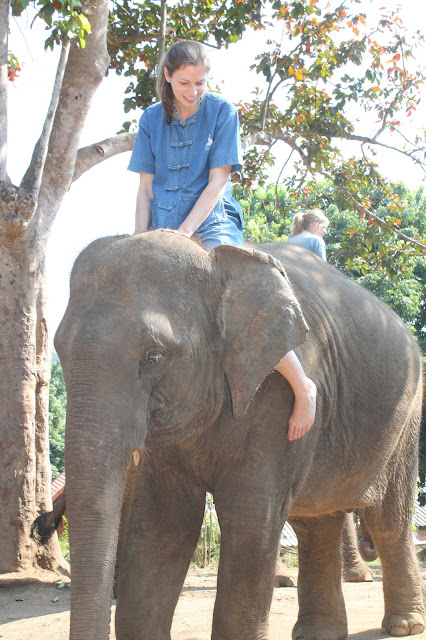 The elephant I had practiced with was eventually taken away because she was apparently getting a little cranky with the other elephant in our group. When I tried getting on the second one, I wasn’t nervous anymore, even when I was walking around with her without the mahout right there. Somehow she followed my directions and I felt amazing. I could finally focus on the fact that I was RIDING AN ELEPHANT and not on my thoughts of what it would be like to tumble down to the ground and whether my travel insurance would cover me if I broke anything. 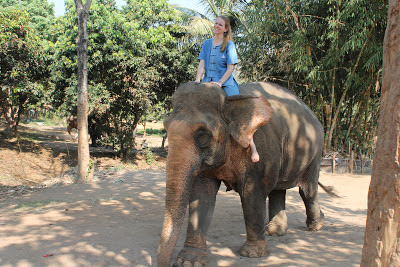 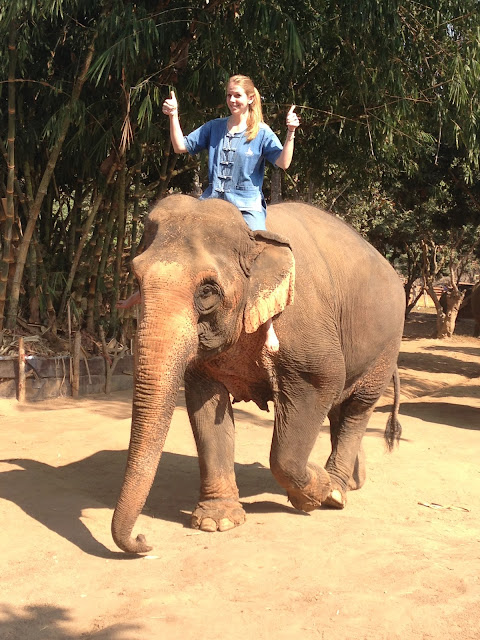 Post-lunch, it was time to take our treks into the jungle. Katie and I had signed up to share an elephant in the afternoon and we were given a female elephant around our age named Me Dee Ka. She was awesome. I got up on her neck like I had practiced in the morning. She wrapped her ears around my legs and I placed my hands flat down on her head which was covered in dust and thick prickly hair sticking straight up. Katie got on her back, as the stronger of the two of us, and had to hold onto a burlap strap tied around Me Dee Ka’s waist. Turns out I didn’t need to be nervous about the language barrier because the elephant’s actual mahout was right next to us and really in control, but it was still fun to pretend we were in charge and to yell out commands to turn left when we were already turning left. 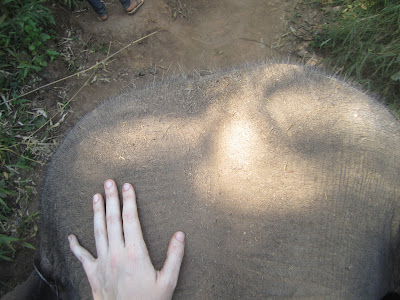 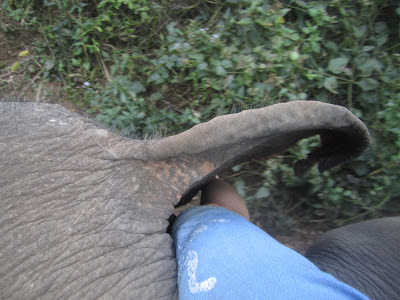 The trek was pretty steep in some places and as we were going up, I knew we were going to have to go down and got that same feeling of “what if I slip off the top of her head with the tilt and she can’t stop quickly enough and steps on me,” but of course, per usual, my fears were just fears and we were fine. We rode the elephants for probably an hour and a half and it was really amazing. It was a good time to reflect (you know I love reflection) and to actually absorb the fact that we had made it to Asia and that we were on this incredible trip together and that we were just riding elephants through the jungle in Thailand. 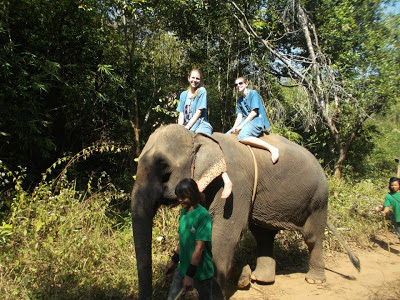 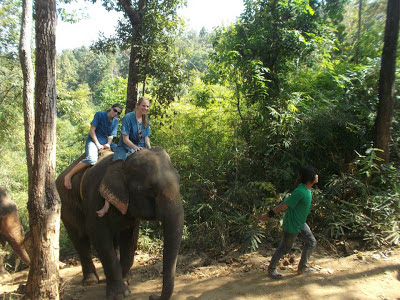 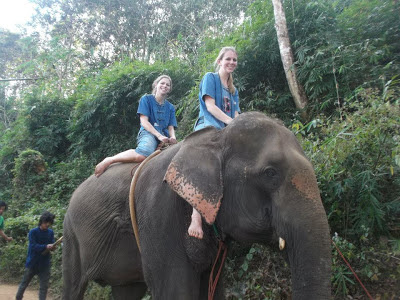 After the ride, we were supposed to thank our elephants for spending the day with us. We got to the watering hole, dismounted, and the elephants walked into the water and just plopped down, which resulted in huge splashes. We poured buckets of water over their heads and bodies and scrubbed them clean with a brush. The elephants would dip their trunks in the water and spray their bodies too and of course us in the process. It was hilarious and awesome and I didn’t even care that I got soaked from that and from falling backwards into the water while trying to throw a bucket on Me Dee Ka. 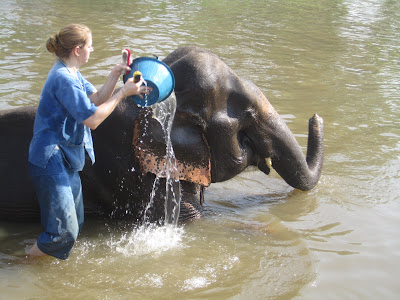 The last thing we did was pat them really hard on the trunk while saying “Dee” which was supposed to be “Good job, thank you.” I really can’t tell you how thankful I genuinely was. I was sad that the day was over and I’m sad now writing this that I can’t easily go back and do this whenever I want to.
Katie and I reframed our line of the previous two days to be “Well if the rest of the trip somehow turns out awful, at least it was worth it, because we got to ride an elephant.” 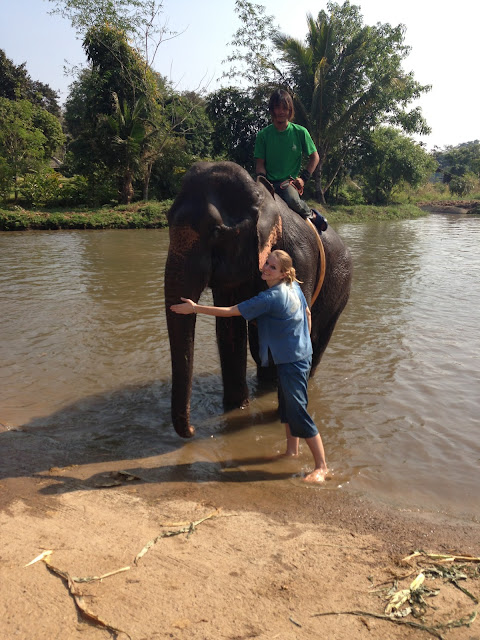 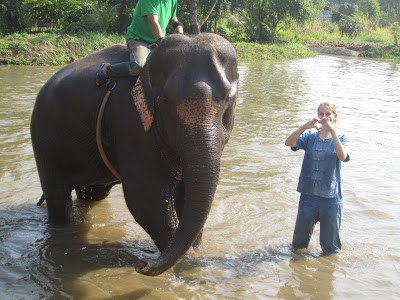 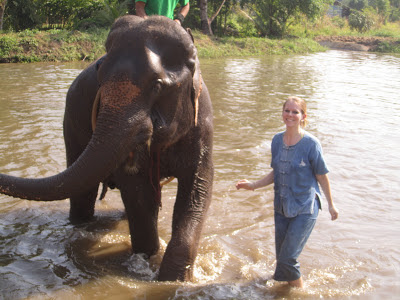 Hands down, best first date of my life.