Home of the Good Burger

Mendy and I met up for lunch on Sunday to catch up and also to complete one of the last items on my 28 Things list, one that he suggested, to eat "the best burger in NYC" at Burger Joint in Le Parker Meridian.

I'm way into burgers and have my favorites in the city. I'm at Shake Shack every week during the summer, and you'll find me hitting up Bareburger, 5 Napkin Burger, Island Burger, & brgr during the winter months. Until Sunday, I was deprived of what many call "the best burger in NYC." I had heard that Burger Joint was in the running, but I had also heard this label thrown out describing burgers at Shake Shack, Corner Bistro, and at Minetta Tavern (if you want to pay $30/burger).

Burger Joint is a little city secret, inside one of the nicest hotels in town. There is always a long line, but as you know, some things are worth waiting for. Before getting in, I thought it would be kind of stuffy and expensive. I even wondered if they would scowl at me if I took a photo of my perfect burger. I'm glad that Mendy didn't tell me before it was our turn to walk in that it was a total dive. The restaurant was probably a storage closet at one point and they decided to destroy the walls and get a grill and see if they could make any side money. And I'm sure they make a lot of it. 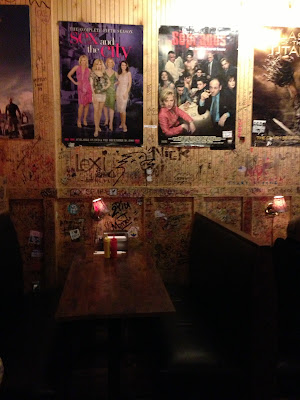 I also had pondered what kind of burgers they would have on the menu. Would Mendy and I get different burgers and split them? How would I decide which burger to get? The things I worry about, huh? Luckily, they make it easy at the joint. I picked a cheeseburger over a hamburger (why would you ever get something without cheese on it?!), cooked medium, with the works. I told Mendy I was not sharing fries with him and he agreed and we got our own. We both made several comments about the brownies sitting next to the counter and at the last minute decided to grab one, too. 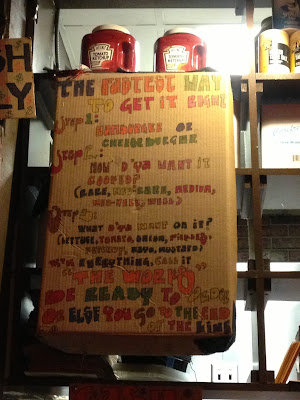 Mendy and I were going to wait to eat the brownie for dessert but after five seconds of looking at it, we both dove in. Hey, I hadn't eaten since my Eggo waffles an hour beforehand. I don't know what Mendy's excuse was. But don't worry, a few minutes later when our burgers and fries were ready, we still went to town. 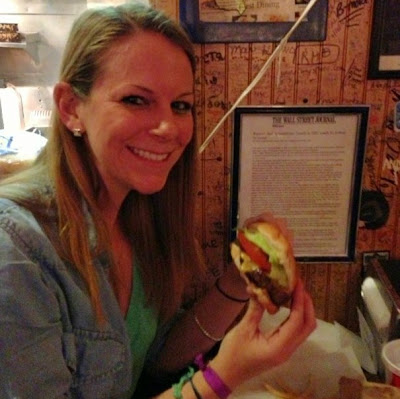 I have to say, Mendy and all those other people might just be right about this being the best burger in the city. It is a burger so good that you'll say "wow, that's a good burger" with the first bite still completely in your mouth. You won't care that it takes you a while to get a napkin to wipe off the juices dripping down your chin. You'll work your hardest to fit that last bite in, even though you know you shouldn't, that you will barely be able to get up from your seat. But that's what a good burger is all about.