I've done a few items on my 28 Things list where I didn't think I'd fit in with the crowd, like when I went to a New York Fashion Week Show or ate at Le Bernardin, but I never expected that a birdwatching tour would be where I fit in the least. 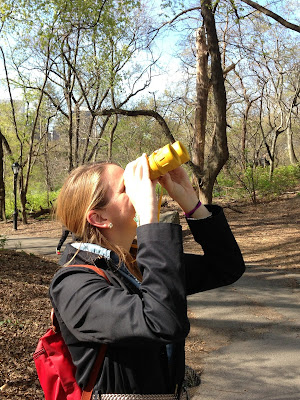 My parents really like birds. We'll be driving in the car and they'll stop looking at the road because a hawk is flying overhead. Or we'll be talking on the phone and one of them will mention a bird they saw in the yard and it'll take me a few minutes to get them to steer the conversation back to me. When my mom suggested this item for my list, I decided it would be perfect for the last item on the list, because I wouldn't have thought of it on my own. Plus, who better to recommend my last item than my mother who brought me into this world 28 years ago?

I met up with Birding Bob at 9 am at the Boathouse. I had borrowed binoculars from Carrie so I thought I was prepared, but when I saw everyone else there for the tour, I knew that I was not. I hadn't brought my bucket hat with pins of different birds on it, I forgot to bring my birding journal where I could record which birds I had seen, and I didn't have my camera with the three-foot-long zoom lens. These birders were serious. 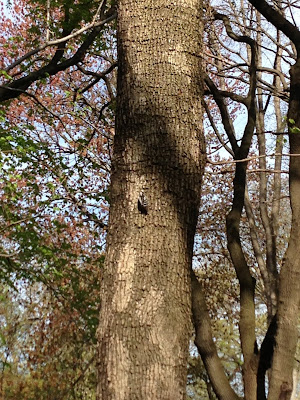 Bob was an awesome guide. Our group was big because the weather was gorgeous and it is migration season, but we were still able to see a lot without scaring them away. Most of the birds were pretty tiny, like the downy woodpecker above, so I was glad I had my binoculars. What I really liked about it was that it was basically a treasure hunt. We walked around areas where Bob knew birds hung out and followed all the clues - listened for bird calls, watched where other birders' binoculars were pointed, and looked for movement in the trees. Once in a while, Bob would play a bird call on his phone to attract birds our way. It also seemed like we were members of the paparazzi, but I'm way better at picking out celebs than different birds. I felt really uncool compared to the others. I was only able to identify the cardinals, blue jays, an egret, and this little guy below: 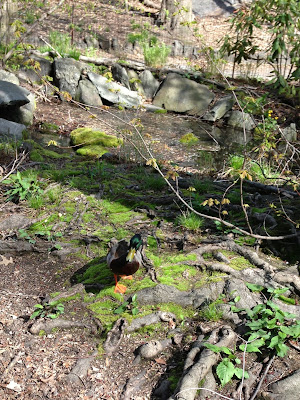 But I was at least told that I saw black-and-white and Northern Parula warblers who were only in town for the week, a Baltimore oriole, goldfinches, towhees, woodpeckers, a Carolina Wren which people could not hold their excitement about, and lots of different kinglets, thrashers, and sparrows. The tour was really fun and something different to do on a weekend morning. It was strange to be actually looking forward to hearing these birds chirping rather than to be annoyed at their chirping outside my window after a rough night out. Being one with nature was perfect for me as I completed my year-long project of my 28 Things to do Before I Turn 28. I don't officially turn 28 until 4:44 pm, so I am WAY ahead of schedule. 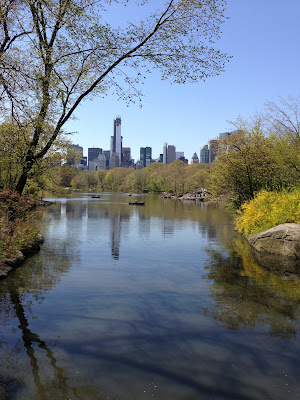