A lot of items end up on my to-do lists in order to redeem myself for times when I was younger and things didn't work out how I wanted them to. For example, on my 25 List was "a successful ski trip" as redemption for falling a few times and giving up pretty quickly on the eighth grade ski trip. An item on my 26 List was to run a 5K. I joined the high school track team to enhance my college resume but it resulted in me feeling awful about myself for four straight springs for being the slowest person in the history of the team. But - redemption! I ran the Hoboken Party for a Purpose 5K in the summer of 2010 and it was awesome. I signed up for another race that Halloween, the adorable "HoBOOken 5K" but I somehow got my necklace and headphones tangled together against my throat and was unable to breathe for the last mile - I know how bizarre this sounds. I signed up for three more 5Ks in the next two years but didn't go to any of them because I had stopped running after that race. 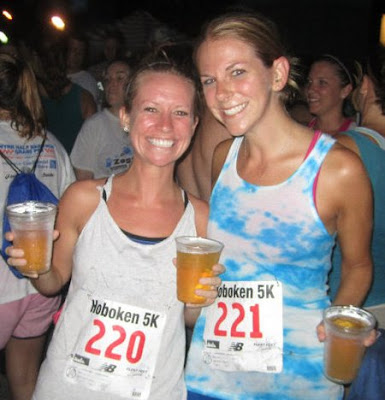 But when my frousins wanted to run the Atlantic City April Fools' 7K and 11K, I wanted to be included, especially since it was in my homeland. In my head I needed again to redeem myself, this time for the ridiculous necklace + headphones debacle, so I started to run again a few months ago, mostly on the treadmill since it was too cold for my britches outdoors. I never got the family athletic gene (and have been envious of everyone for at least twenty years because of it), so my dad and I signed up for the 7K while the rest of the team opted for the 11K. Emily (pictured above), the marathoner in the family, was unable to run, but I will let you read about that in her own words. 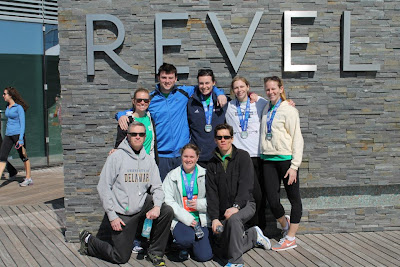 Since I am SO HARD on myself (as in, I actually thought on several separate occasions how I only brought one crossword puzzle home with me this weekend when I should have brought home more), I was really nervous about the race. I knew that I would cross the finish line, 4.34 miles is not that far, especially compared to what my frousins were running, but I wanted to make sure that I didn't give up in the middle and walk any of it, because in my mind, that would have made me a failure - Erin, it wouldn't have. When I did train outside (twice...), I stopped a few times because I didn't know how to pace myself when I wasn't on the treadmill. I didn't want this to happen in the race.

My dad and I didn't really talk about it until right beforehand, but I think we had both been hoping we'd run the race together and keep each other moving. I felt awesome the entire race, whether it was because of the playlist I'd been working out to for weeks (an even mix of gangster rap, Bruce Springsteen, and Justin Timberlake), the breeze coming off the ocean, or being next to my dad, I'm not sure. There was one especially amazing moment probably around the three-mile mark where my dad turned to me, pointed to his headphones, and said "Rosalita!" This was the only time during the race he told me what song he was listening to. "No freaking way," I said, "I'M listening to Rosalita, too!" 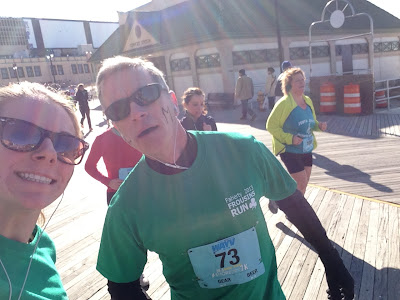 Dad and I ran together on the boardwalk for the whole race and crossed the finish line together. It either means he's in really good shape or I'm in really bad shape (or we can go with a combo of these two choices). I didn't walk at all (woo!) so when I finished, I was pretty proud that I had redeemed myself from my previous race. There was no reason to be hard on myself this time (Erin, there's never actually a reason to be hard on yourself). Running the 7K was great because when I finished, I jumped right into cheering for the rest of the family as they came in for the 11K. And I *did* get the family cheering gene. 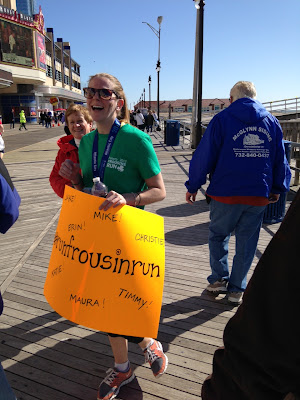 Having something this past Saturday that I was nervous for that totally worked out bodes well for this Saturday's activity that I am growing more and more terrified about. But the absolute coolest thing about all of this is that the race was part of the AC marathon series, and anyone from MTV's Room Raiders looking at my medal will think I ran a marathon instead of just a wimpy 7K. 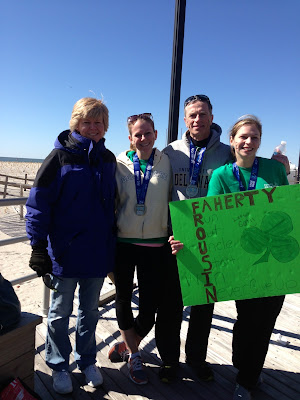