Guys. Unofficially, summer is here. It may not seem like it at this exact second I'm writing this because it looks disgusting out and I did get splashed with tons of what I imagine to be sewage water from an excessively large puddle on Canal Street while commuting home, but Memorial Day has come and gone. Even if just three nights ago we were bar-hopping in ankle boots and faux leather jackets, on Sunday (or "second Saturday" per Kat), I wore short sleeves all day, and on Monday, I was able to actually wear a dress. These warm days still seem to come and go but they'll be more prevalent in the upcoming weeks if I have anything to say about it. I'm looking forward to many outdoor activities this year and I've gotten quite the slow start.

But, thanks to the sun on second Saturday, Kat, Kristyn, and I were able to spend a fun day at South Street Seaport, one of my favorite city gems, and I was able to visit two of the places on my summer list. First up was breakfast (at 2 pm...) at Smorgasbar, an extension of the popular weekend food festival Smorgasburg, which made an appearance on my 28 Things list. Gourmet food booths were serving up food all day and into the night - we spent quite a few hours there and ended up splitting chanchito (pork) tacos from Fonda, a Connecticut Style lobster roll from Red Hook Lobster Pound, a Milk Truck classic grilled cheese sandwich with sauteed onions, & a pepperoni Pizza Moto, fresh from a portable brick oven that a lumberjack (?) was chopping wood for right in front of us. There were four or five additional food vendors and then of course, a beer booth, where they were selling a few of Brooklyn's finest brews and Kelvin's Natural Slush mixed with liquor. 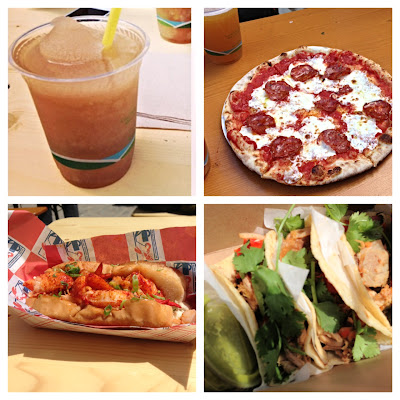 The second item on the summer list was the new establishment Watermark Bar down the pier a little more where we made a successful transition from day- to night-drinking. There is an indoor and outdoor part of the bar, but at least on Sunday, all the outdoor tables were covered, under the overhang. It would be nicer if you could sit out in the sunshine with a beer, but there are other places at the Seaport for that. It would also be nice if the place had a bathroom and you didn't have to sprint (I run when I drink) halfway down the pier and wait in line with the general public. Watermark could use a bathroom, but it's still a good option for when you want a beer at the Seaport but don't have the energy for Beekman Beer Garden (especially if Beekman is hosting a weird Red Bull party). 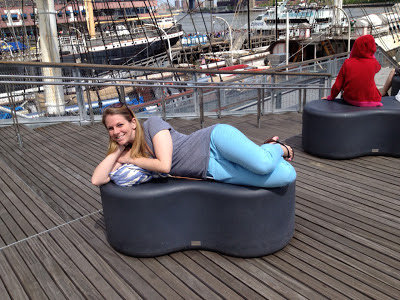 I will definitely be spending lots of time down at the Seaport this summer and into the fall. I encourage you to as well, a lot of the businesses down there suffered quite a bit from Hurricane Sandy and we should help them out as much as we can. And if we can do that while enjoying amazing food, views, and beer, then that makes it even better.