A Love Letter to a Bar

Wednesday is Third and Long's last night open as a bar, but it represents so much more to me than simply a bar. It was the first place I felt at home in the city, even before I could officially call the city "home", when I was still taking the PATH in every day from Jersey. A friend I met on the last night of college introduced me to Third and Long my first week working in the city. He brought me to Wednesday Night Trivia and I was hooked. I met so many wonderful people and suddenly had a group of friends in a city I was just getting used to, some who remain very close to me today. Before I even understood the subway systems or to hail a cab driving in the direction you wanted to go, I had what was important, a bar where everybody knew my name, on the corner of 35th and 3rd.

For the first two and a half years I lived in the NYC area, there was a 90% chance that I would be at Third and Long on a given Wednesday night for Trivia. I was actually part of an official team for about a year of that - no one missed a week unless it was urgent. For a girl who only received participant trophies while growing up, getting first place in trivia was a big deal, and we won pretty frequently. I still have the bar tabs and glassware to prove it.

Third and Long is a sports bar so I sat out of some questions, but I was an all-star on others, especially when the halftime rounds would feature song clips for which we'd have to identify the title and artist. If necessary, I would run outside to sing the whole song to myself so that I could concentrate on remembering the title and artist. Sometimes I did this in the pouring rain because that's how much I wanted that extra half point. We'd draw out entire maps of continents on napkins to try to figure out the geography questions, list out every character on the Office to determine which characters had the same first name as the actor who played them, and make sure we all had read the Times on Wednesday morning in case of any current affairs questions.

Curtis even let me host trivia with Brad one night a few summers back. I decided to do a 1960s theme so that I could dress up ridiculously for it, because...why not? I invited all my friends and felt like a celeb for the night. I've never shied away from attention. 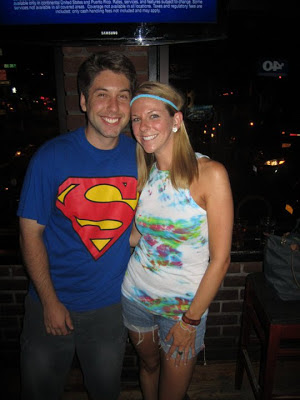 I haven't been to Trivia there in over a year. Although nothing was ever said, I felt like the person who introduced me to Trivia Night deserved to keep it in the breakup. But now that I've lived close by for a while, I have stopped into the bar frequently on other nights to sit at the bar or just to say hi.

Last week, I stopped in after Trivia had ended because I knew it would be the last time. It just felt right to go in for a little. I saw people I hadn't seen in years, including some from an opposing team with whom we'd had a friendly rivalry - although it turned less friendly sometimes, depending on how many drinks we'd had. It was so strange for me to be back there with these people who had seemed so familiar to me when I first moved up here and to see how much they'd all changed. "You got married?!" I said to one of the rivals as I marveled silently over how much weight another one had lost.

But I've sure changed a lot too in those four years (four years?!) since I moved up here blindly and really needed a place to feel home. Thanks for being that place for me, 3&L, and thanks for the memories.