Spring is one of my three favorite seasons, but it felt a little different this year than in other years. After I finished my 28 Things list, I felt like I took it too easy the rest of the season and relaxed a little too much (only I would think of this as a bad thing). I actually felt really lazy and unproductive for most of May and June. Of course in hindsight (gosh darn you, hindsight), I actually did quite a bit that I didn't end up writing about and here are some pics I haven't shared yet.

In late March, NYC joined the rest of the world in celebrating Earth Hour. I happened to be walking past the Empire State Building (during my food truck weekend) a few minutes before the lights were turned off and took these before/after shots: 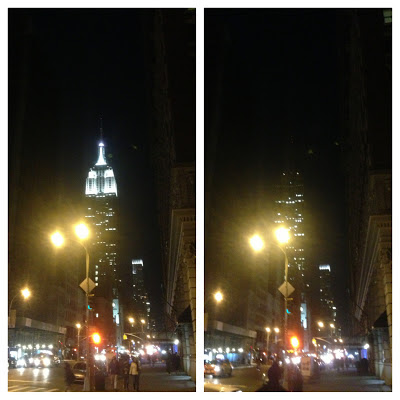 Caitlin and I had one of the best lunches I've had in the last few months (almost as good as lunch with her at Le Bernardin) at Momofuku where we treated ourselves to their amazing duck wraps on Good Friday when we both conveniently had off work. The lent laws don't apply on Good Friday. The pope told me that. 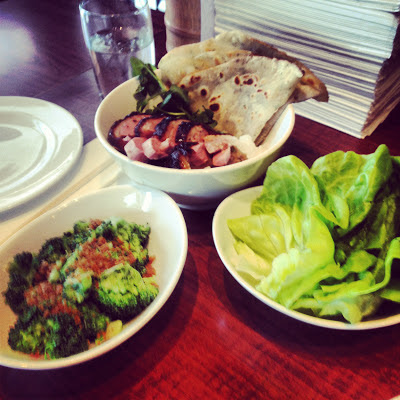 I spent a nice day in the West Village with my parents for Mother's Day and we spent time walking around my favorite streets in the city and sampling a bunch of the best food places down there including pizza from Joe's, pastries from Rocco's, and gelato from Grom. 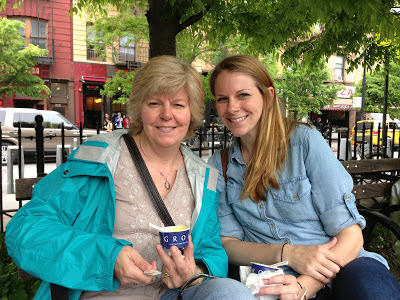 I got lots of extended family time at Easter at home base (Mom Mom's), the 7k/10k in Atlantic City, my little cousin's birthday party in Maryland, and my cousin Maura's graduation party at the pool this past weekend where we also took part in a cheesy Father's Day photo shoot. 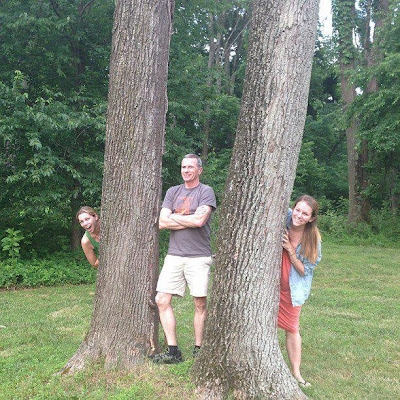 Carrie and I scored (free) tickets to one of the Subway Series games where the Mets play the Yankees. Admittedly, instead of paying attention to the score, we were more excited about the nice weather, the great food and beer, and the races between the innings of the animated subway trains headed to Yankee Stadium. 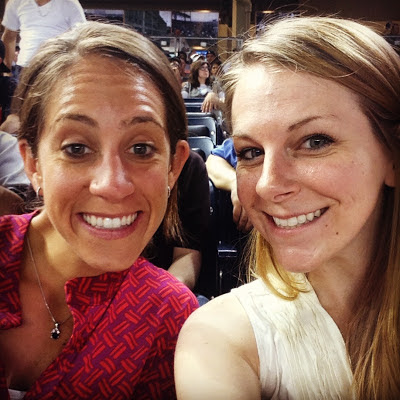 Speaking of baseball, the second cutest mascot of all time, Mr. Met, decided to visit our office one Friday so I of course had to take a photo with him: 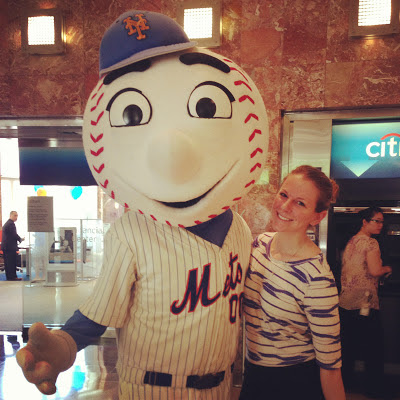 One of my favorite nights all year is Mug Night at my alma mater during Alumni Weekend. My friends and I always have an amazing time filling our mugs up with booze, eating tons of soft pretzels, taking a million pictures, and giggling. The first year I went, my abs legitimately hurt for a few days from laughing so much. What happens at Alumni Weekend stays at Alumni Weekend, but I will say I rarely feel more comfortable than when on the dancefloor at Kate's pretending I'm 21 again with all my college bests. And NYC may be known for bagels, but why don't you click this link and scroll all the way down to the #1 "Best College Hangover Breakfast Spot in the Country." No wonder I love it there so much. 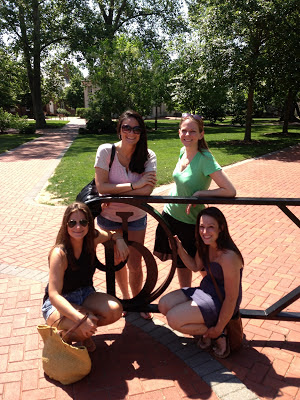 In addition to a few Upright Citizen Brigade shows, Aubrey and I went to see our favorite comedian, Rob Delaney, at Caroline's one night. I took the opportunity to introduce Kat to Rob and we later walked back to the east side through 30 Rock and posed with the "Human Nature" sculptures: 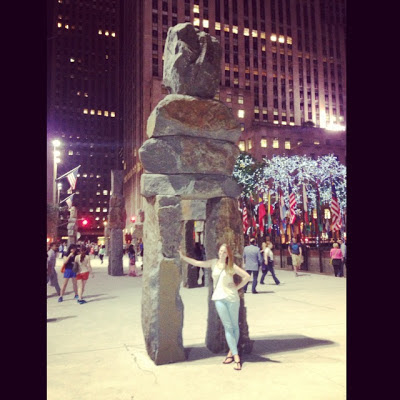 The rest of the season was rounded out as it should be with lots of sunshine, daytime drinking, park sitting, and staying out late without a jacket or a care in the world.

All in all, I'd say it was a pretty good season.