Throwback Thursday - When I Fell in Love with NYC

When I was home this weekend, I went through some of the relics in my childhood bedroom and found quite a few gems - horrible photographic evidence of my awkward teenage years, notes from old classmates, and some journals that I had completely forgotten about. I settled down under my covers with my ceiling fan on blast and took a trip down memory lane.

One of my favorite journal entries I uncovered was from March 14th, 2000 - what may have been my second trip EVER to NYC, with the Ocean City High School choir. It looked like this (written out below): 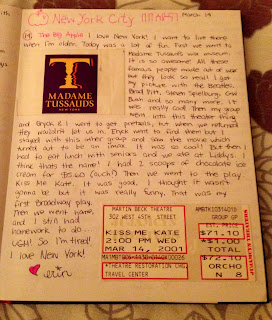 "The Big Apple" - I love New York! I want to live there when I'm older. Today was a lot of fun. First we went to Madame Tussaud's wax museum. It is so awesome! All these famous people made out of wax but they look so real! I got my picture with the Beatles, Brad Pitt, Steven Spielberg, GW Bush, and so many more. It was really cool! Then my group went into this theater thing and Eryck & I went to get pretzels, but when we returned, they wouldn't let us in. Eryck went to find them but I stayed with this other group and saw the movie which turned out to be an IMAX. It was so cool! But then I had to eat lunch with seniors and we ate at Liddys. I think that's the name! I had 2 scoops of chocolate ice cream for $5.60 (ouch!) Then we went to the play. Kiss Me Kate. It was good. I thought it wasn't gonna be but it was really funny. That was my first Broadway play. Then we went home and I still had homework to do...UGH! So I'm tired! I love New York! <3 erin

There is so much that amuses me here.
But - most importantly - the line "I want to live there when I'm older..." - I had no idea that I wanted this so early in life. I thought this idea originally popped into my head freshman year of college when all my friends were from North Jersey, Long Island, or Westchester and we all just assumed we'd live and work in the city together when we graduated.

Considering how much I've changed (as anyone does) since I was a sophomore at OCHS, I was surprised that 15-year-old Erin wanted what adult Erin wanted. Although that Erin was also obsessed with Justin Timberlake, making her own websites, chronicling her life, and figuring out how to follow her dreams. Maybe I haven't changed as much as I think. But can we all agree I'm a *little* less awkward? 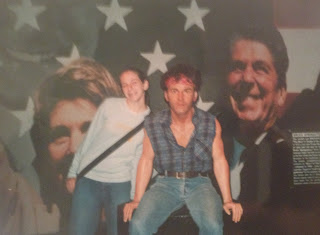