Marie's Crisis Cafe, You're the Top

Now that summer is winding down, the nights of drinking on boats are coming to an end. My friends and I have decided this fall that instead of going to whatever bar has the cheapest happy hour specials, we are going to finally explore NYC's most historic bars. This idea was sparked with a trip to McSorley's earlier this month and brought a few of us to Marie's Crisis Cafe in the West Village last week. 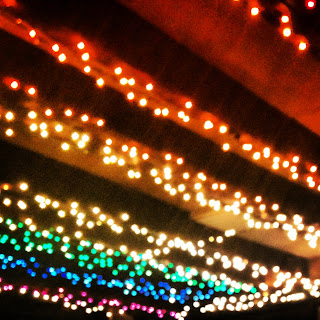 According to NY Mag, Marie's Crisis Cafe was originally a prostitute's den in the 1850s, a "boy bar" in the 1890s, and it stayed open through Prohibition. Make sure to check out the "mirror" behind the bar, which has scenes from the American Revolution but in which you cannot actually see your reflection because it is so old and dirty. Thomas Paine himself died at this address, which is where the "Crisis" part of the bar name comes from - referencing Paine's "The Crisis Papers."

We walked in and within a minute, a single note played on the piano. I instantly got a flashback and realized that I had been there before. I stopped by once years ago around 3:30 in the morning and forgot all about it until that piano made some noise. I now recall telling myself to remember it so I could return, but it was one of those nights after which I didn't remember much and I am so glad to have happened upon it again.

This place has everything. Piano players who only play showtunes and the theme song to the Golden Girls. Former glee club members and aspiring Broadway stars singing along to every word. Singing waiters. Your favorite CBS Sunday Morning correspondent enjoying the scene with you. $5 white wine that tastes like absolute crap but is $3 less than a bottle of Stella. Ghosts.

I spoke with one of the managers (who I believe was named Mike, but I had consumed several glasses of $5 wine at this point) who told me all about the ghosts. He himself does not typically believe in them but has had two strange experiences. One in which footsteps were heard inside once the bar was closed for the night and one in which a woman's voice was heard in the basement and it just so happens that in the 1980s, a woman died down there. Needless to say, I would not go to the basement bathrooms by myself after hearing that tale.

We got called out by the piano player at one point as "Hiltons" so we assumed he thought we were tourists. He asked what we wanted to hear and I panicked and all I could think of was "Something from Oklahoma?" Everyone rolled their eyes and he started playing "I'm Just a Girl Who Can't Say No" which isn't even a song that I remembered. Next time I am going with a list of songs that I think the crowd would approve of, although it's tough to tell what would go over well and what would not. There are *many* regulars here.

Aside from the ghosts, this place is seriously the best. It makes for a completely non-typical night out in Manhattan that everyone should experience at least once. If you need someone to go with, "I'm Just a Girl Who Can't Say No."

My third post for the NYC Food Truck Association can be found here!

The other night, Kater and I found ourselves in the East Village and decided to end our evening at McSorley's Old Ale House. McSorley's claims to have opened in 1854 - there are some disputes on the actual opening based on records of the building / census reports - but it *is* widely recognized as the oldest Irish Tavern in NYC. The bar had been on both of our to-do lists for ages and we were both surprised to find out that the other had not been yet either. 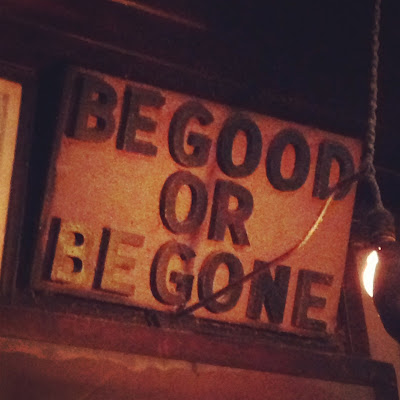 This is not the place to go and order shots, margaritas, or appletinis - if anyone actually drinks these. We had each done our research over the years so we ordered correctly and didn't look like fools. There are only two beverage orders at this joint - light or dark ale, which are made these days in Utica although at some point they were brewed at the bar. You get two smallish plastic pint glasses per beer. It's only $5.50 for the two and it's delicious, either way you swing.


After getting our drinks, we took in the bar and did a little more research on our phones. There is sawdust all over the floor to absorb spills and potentially to make you feel like you're really in the old days. The walls are covered in paintings, photos, newspapers (including the cover of the NY Times with the sinking of the Titanic), and more. Nothing has been removed from the walls since 1910 although much has been added over the years.

There are three things that you should make sure to seek out when you are there if you're into history - if you believe these tales of course. 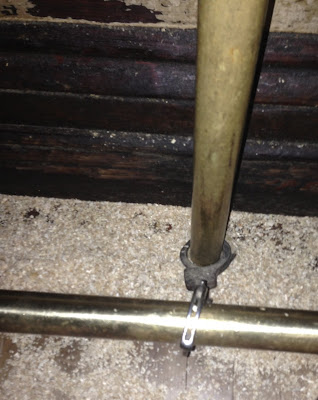 Another fun thing about this place is that it was one of the last bars in Manhattan to not allow women, even while it had a female owner. It only started letting ladies in the doors in 1970. Why would anyone want to go to a bar without ladies?!

Of course we felt empowered since we are ladies, locals, and Irish lasses so we ended up staying for more than just the "one more drink" we had promised ourselves when walking in. The communal tables are good if you like to chat with strangers, play games with them, and accuse them of never having seen the ocean. Irish Americans love little more than talking to actual Irish Irish people, so of course, per usual, I asked the staff if they know the tiny village in Ireland where only my family has ever lived. Even though I yelled the wrong Irish name (Brendan vs. Shane) at one of the waiters to try to get his attention, the staff was happy to chat, at least they are if you're wearing a dress.

Our plan is to become regulars here so please let us know if you want in. We were told the true regulars camp out during the day with some mugs, a sleeve of Ritz crackers, some raw onions, and some mustard. Sounds almost as appetizing as a Cronut, right?

Before we went to Italy last month, everyone kept raving about the gelato. Our frousin Kara told us to eat it twice a day. We didn't quite follow Kara's rules to a tee, but we did eat a sufficient amount. Our first night in Rome, after our overnight flights during which no one slept and a marathon day to avoid jetlag, we wanted to treat ourselves with our first gelato. We asked the desk guy at our hotel where we could find gelato around there and he suggested a place ten minutes away. At that point we were so tired that we couldn't fathom walking even just ten minutes. So the desk guy told us that there was a place on the corner as well, although indicating that it wasn't as good as the other place. A family joke about the conversation is that we were all shouting, "We don't care what it tastes like! We just need gelato! NOW!"

But gelato wasn't the only sweet treat we enjoyed. Here are the top five in no particular order, including some gelato places that stood out among the rest:

We took a walking tour of Trastevere from my Rick Steves guidebook (he is the BEST and was basically the fifth member of our family in Italy) and he told us to stop by Biscottificio Innocenti for their old-fashioned cookies. It was adorable - authentic, off the beaten path, and delicious. We spoke with the girl there whose great-grandparents started the bakery and she told us about their special ovens which run on two different speeds. We each got a cookie that the baker called "ugly but good" and then I got a heart-shaped cookie with Nutella inside. One of my regrets from Italy is that we didn't buy enough cookies there to last the rest of our trip, especially because we got eight cookies for less than three Euros. 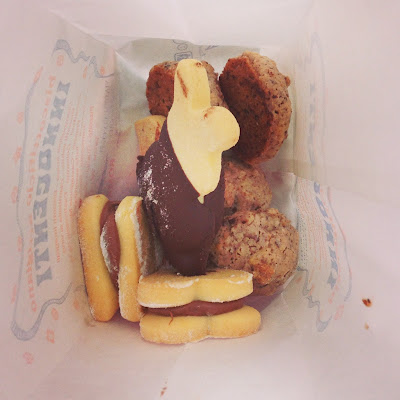 Several places in Piazza Navona around the Fountain of the Four Rivers offer the famous Tartufo, but Rick told us to try Tre Scalini, and who are we to deny Rick? Tartufo is a large ball of vanilla ice cream with a cherry in the middle, covered in a rich chocolate shell, and topped with whipped cream and a rolled wafer. There was no way we could have each conquered a dessert of this size, so we got one to-go and searched for a spot to eat it before it melted. First, my dad wanted to sit in a spot right in front of a pile of vomit, not seeing it of course, but wondering why such a huge space was empty. Then we sat in front of gates of some sort next to some Europeans talking about Bruce Springsteen, but we were asked to move (in Italian) by a woman waving keys and smiling brightly. It's a wonder we weren't all covered in melted chocolate by the end of it, but luckily, only my mom was. 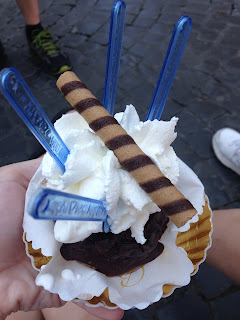 
Of all the gelato we tried, this was my favorite. It also happened to be the last we had before leaving. I had black raspberry and chocolate and actually got the same combination when we returned just a few hours later . Luckily, the staff had switched out at that point. 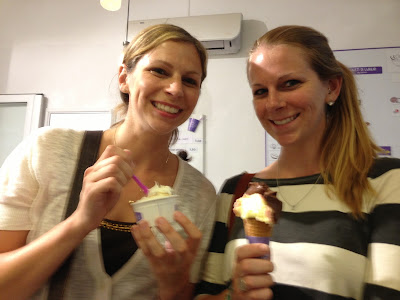 
This gelato place was first recommended to me by Carrie and we definitely deserved it after a hectic morning of exploring Vatican City & the museum. Vatican City had more (and more annoying) crowds than we encountered during the rest of our trip. We had to wait in line in direct sunlight for a little bit for our treat, but I'm no stranger to that. I *am* a stranger to wearing a long skirt when it is 97 degrees out in an attempt to dress conservatively for the pope. I was in DIRE need of something cold and ate my gelato fastidiously. We walked back across the street to eat against the Vatican walls because I was not waiting any longer. Hope Francis didn't mind. 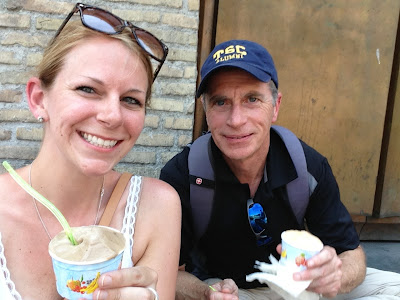 Another of Rick's picks, at a cute little corner place in Florence run by some frousins, offered some amazing chocolate soufflé / chocolate lava cake, which are basically my favorite. Even though the waitress didn't know what to say when I said, "So, tell me about this chocolate soufflé," there was no way we weren't ordering it. It did not disappoint. 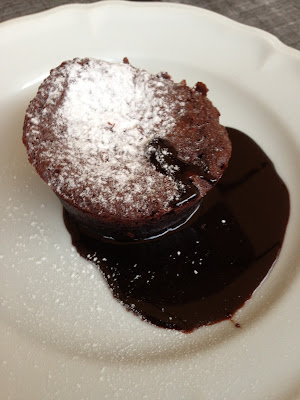 Okay, I'm off to eat an entire box of Cinnamon Toast Crunch since it is the only sweet thing I have in my apartment right now and I am craving sugar like crazy after writing this...