Cheers to the Governor!

Going to Governors Island has been on so many of my to-do lists - my 26, 27, 28 lists, endless lists of the summer, and a long-standing list of things to do with Kat. GI is a small island about a 10-block length off the South Street Seaport. It is only open during the summer months and only reachable by ferry. Kat and I finally made it this past weekend. It was a little chilly as summer is ending, but hopefully next year we won't push it to one of the last weekends possible.

Here are some of my favorite things about our trip to GI:

The Ferry - I really love being on the water around Manhattan, whether in a kayak, speedboat, or just sitting on a boat docked near the Boat Basin. The Ferry to Governors Island is a quick ride, maybe around five minutes and is free. On the way there and back, Kat and I just made it on before the ferry left so we had to sit inside instead of on the open second level. Considering how cold it was on Saturday, this was probably for the best. 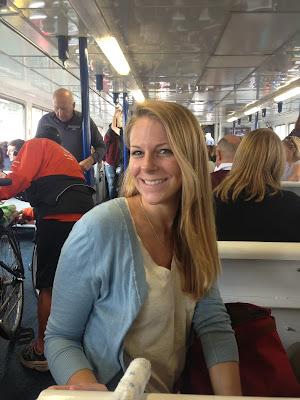 Fête Paradiso - This summer, Governors Island was home to a traveling vintage Parisian festival, with antique rides from the late 1800s and early 1900s. Some of the carousels and swings were actually in working order and you could pay $3 for a ride but there were three-year- olds aplenty and many lines so we didn't ride anything. We did wait in the most important line there, though - the cotton candy line. 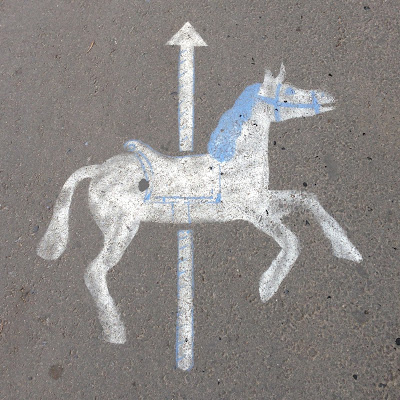 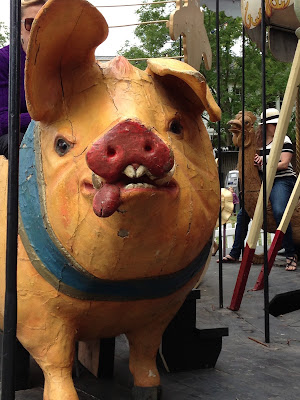 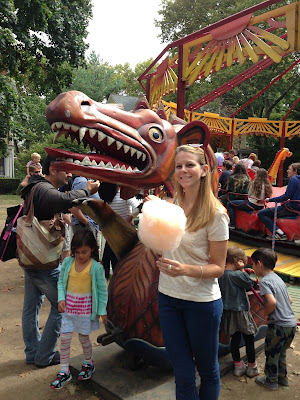 The View - Seeing the city from different viewpoints always reminds me how lucky I am to live in the middle of such a beautiful skyline. I think it's amazing to see as you're coming back from a weekend at home on the bus or train, or hanging out in the parking lot before a Bruce concert, and definitely from this tiny mysterious island. 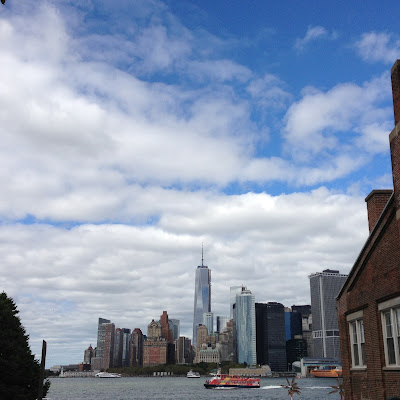 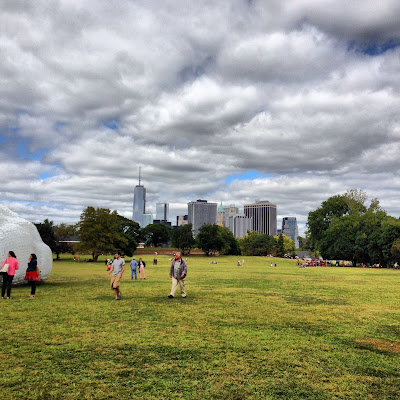 The Pocket Project - Outside of the GI Children's Museum is a display of random pockets sewn onto a long piece of canvas with wishes for what people would find in their pockets if they could find anything. Although cheesy, I appreciated the sentiment and the crowd-sourcing and it reminded me of Yoko Ono's exhibit at the MoMA as well as this post-Sandy display at Fishs Eddy's last year. I spent some time peeking in the pockets at others' submissions and then added a weird one of my own - any guesses? 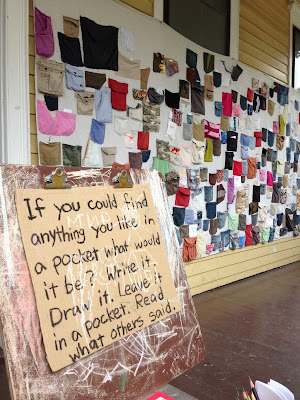 Chickens and Goats! There is a large area where goats can sit on picnic tables and chickens can walk around freely (and into the sewer grates if that is what they choose to do) in an effort to teach New Yorkers about composting. The people working there would only let twelve people into the pens at a time but I'm not sure why this was an issue since the chickens were allowed to come and go. Head in the Clouds - Kat and I went to look at a large tent-like sculpture in the middle of the park and realized that it was made of milk jugs. The inside is lined with water bottles, each with just a splash of dyed blue water. Considering what the sculpture is made of, the inside is actually quite beautiful. 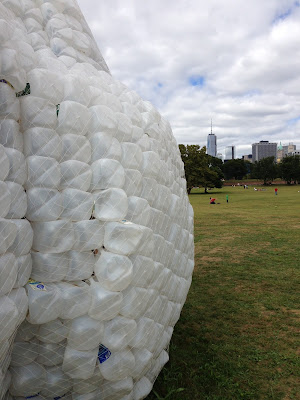 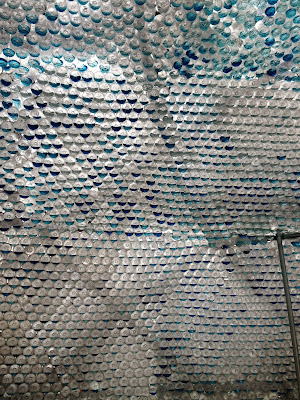 Next summer's trip will definitely be while it is still nice out and complete with a picnic basket and a frisbee, but Kat and I had a nice introduction on Saturday. This also gives me an entire year to collect milk jugs and water bottles for my own art installation, if anyone from Governors Island decides to give me one. Pretty please?