Day Trippin' - I Went to Philadelphia and I Liked It

I have had beef with Philadelphia before. And not chopped up, grilled, and covered in Cheez Whiz kind of beef. I'm talking about, you tell me you're from Philly or going to Philly or like the Eagles and I raise my eyebrow, scrunch up my face, and sigh kind of beef. This all stems from growing up on the Jersey Shore. On our particular beaches down south, every summer there is a huge invasion of Philadelphians to our otherwise calm and pleasant seaside towns.

Despite me holding a grudge against an entire city because of tourists who bring tons of money to the Jersey Shore every summer, when I heard MK had never been to Philly, I immediately thought we should take a trip. I wanted an opportunity to change my mind about the city and its residents. I did go there several times in my first two years after college before I moved up to NYC, for birthdays or nights out, but I hadn't actually explored the city like I do now when I travel.

I'm calling this a "Day Trip" even though we stayed a little longer because you could absolutely go to Philly in a day from NYC. It's less than two hours by car or train. We took a little longer on NJ Transit to Trenton + SEPTA to Philly because it was a lot cheaper than Amtrak.

Here were my favorite things about our trip to the City of Brotherly Love:

Getting to see old friends!

MK and I were able to spend time with two of my favorite friends from college and their wonderful significant others while in Philly. I hadn't seen either of them since Alumni Weekend in June so catching up was long overdue, plus I've told Ash at least twenty times in the past five years that I was going to come visit Philly at some point. We also randomly ran into one of my very best friend's parents on the sidewalk which was super fun and unexpected. 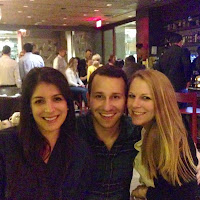 MK and I hopped into The Corner Foodery for dinner on Friday night. We ordered the porchetta sandwich (with aged provolone, broccoli rabe, & long hots), sides of marinated mushrooms and warm mozzarella, and picked out two Philadelphia-themed brew-skis. Lucky for me, MK took the first bite of the sandwich. He hadn't noticed the long hots on the menu and I hadn't really realized how hot they were. MK's mouth basically set on fire and I didn't know what to do except attempt to feed him the mozzarella since I know milk helps in these situations. The mozzarella did not help. So I just giggled for a few minutes, picked anything off my sandwich half that might be painful, and continued to eat. My sandwich half was absolutely delightful. 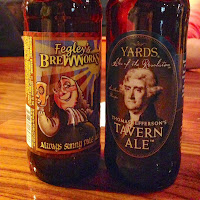 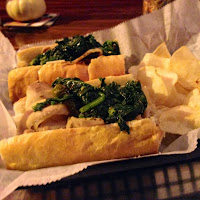 For Saturday, I set up a historical tour for us with Marta at Free & Friendly Tours, a tip-based company. We started off on the wrong foot when I accidentally brought MK, AM, & GK to the wrong coffee shop where I thought we were supposed to meet. This resulted in MK and I waiting 25 minutes for our coffee and two really gross croissants. But once we got started, we walked around the town learning a ton about William Penn, the Quakers, the signing of the Constitution, the Liberty Bell, and Independence Hall (below left). We traveled to Ben Franklin's home and tossed pennies on his grave (to commemorate his witticism "a penny saved is a penny earned") AND learned what a womanizer he was while he was traveling in France. 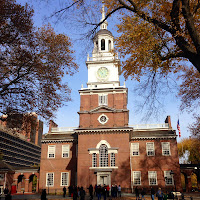 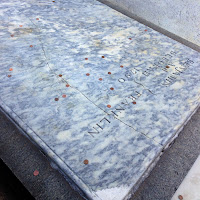 Not only did Sabrina's Cafe have a special "Hunger Games" themed menu (with dishes like "Peeta Peeta Pumpkin Eater Pancakes" and "Haymitch's Hangover Cure Egg Sandwich"), but it also lived up to its reputation of having one of the best brunches in Philly (is that Stuffed French Toast even real?!?!) AND the waiter gave MK a "To my Daughter" mug for his coffee. Home run. 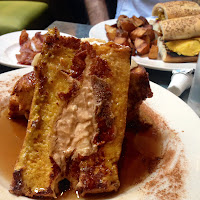 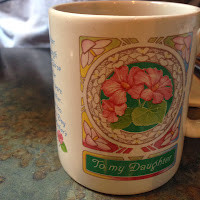 While most of the exhibits at the Franklin Institute are actually geared toward children, MK and I enjoyed everything interactive. We climbed inside the two-story model of a human heart, touched a chunk of a meteorite that is a billion years older than the Earth (below right), and watched a movie in the planetarium. MK's favorite part was getting shocked in the electricity exhibit and then poking me so the shock got transferred over. I'm not sure that we learned much but we did have fun playing. 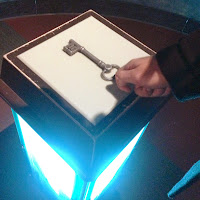 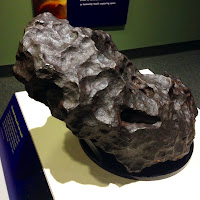 Philly, I think I want to see more of you. Let's be in touch. Just please don't shock me anymore.

PS - Of course we ate Cheesesteaks! I'll be writing about that on a later date!