In addition to my aforementioned incredible year with New York City, in 2013 I got to explore the world further. In recent years, I've only taken one small trip a year: St. Thomas a few times, London, Amsterdam. This year I took two bigger trips and I don't want to stop anytime soon.


I spent a full month with my older sister as we traveled through Thailand and Hong Kong in January and Italy in July. My parents joined us in Italy for our first family vacation in a decade. Hopefully we don't wait another decade before our next. 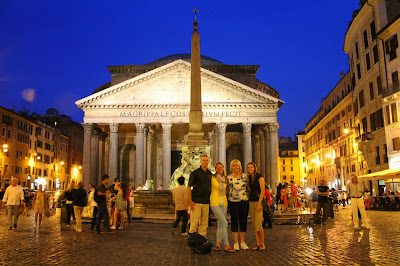 Our trip to Thailand made Asia my fourth continent. I rode elephants. I held tigers. I fed monkeys. I freed birds. I got accosted and interviewed by Thai schoolchildren. I discovered egg tarts, egg waffles, dim sum, and hot pot in Hong Kong. I took a jello shot out of a plastic syringe. I visited holy places and got blessed by Buddhist monks. I made wishes. 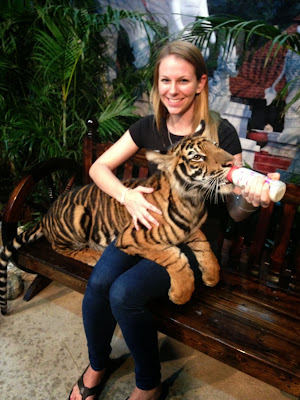 In Italy, I saw ruins from thousands of years ago. I wandered around Pompeii, a city I'd been wanting to experience since I was six. I saw masterpieces by some of my favorite artists that I never thought I'd see. I got close enough to Michelangelos to touch them. I didn't touch them. I ate fresh pasta, tomatoes, seafood, and pounds of gelato. I made more wishes. 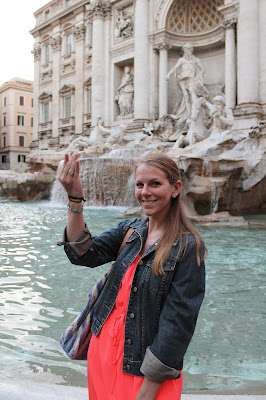 Here are some of my favorite travel posts of the year:
xo
No comments:

I finished up my big "28 Things to do Before I Turn 28" project right before my birthday. I trapezed on the roof of Chelsea Piers. I walked the entire length of Broadway in one day. I went to speakeasies and four-star restaurants and on a bird-watching tour. I ate from food trucks for an entire weekend.

I became close enough with the guy at the local diner to get free mozzarella sticks each time I go in, provided I give him a hug first. I ate a ridiculous number of bagels, mostly cinnamon raisin with jalapeño cream cheese (the Aubrey special). I sang Lisa Loeb's "Stay" way too many times at karaoke. I talked to Andy Samberg, Rashida Jones, and the guy who makes the Cronuts.

I got private tours of NYC on the back of a Vespa with a handsome gentleman even after I threw up on our third date. I swung on swings. I learned I'm not terrible at darts or ping pong or mini golf. I carved pumpkins for the first time. I started to cook more. I rode bikes again.

I celebrated birthdays, job changes, engagements, and a wedding. I said goodbye to a bar where I'd been a regular and became a regular at a few new places. I hung out with my family a ton but still not as much as I wanted to. I wrote for something that wasn't my own blog. I acquired a banjo.

Here are some of my favorite New York City posts from this year:
xo
No comments:

Christmastime in the City

I've typically been a little behind when it comes to Christmas. I hope my family is okay with gifts purchased from Port Authority on Monday night right before I head home. But while my Charlie Brown tree may remain undecorated, my cards unstamped, and the second half of "It's a Wonderful Life" unwatched, at least I was able to get into the Christmas spirit a little by just walking around the streets of Manhattan this weekend with MK.

We saw the tree in the New York Public Library lobby and the lions, Patience and Fortitude, decked out in wreaths: 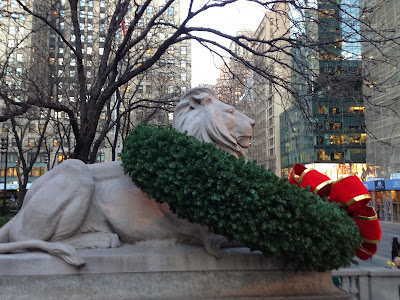 We marveled (and drolled) at the NYC scenes in the City Harvest Gingerbread competition at Le Parker Meridian (check out 2010's here): 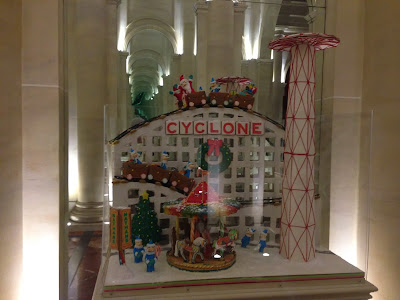 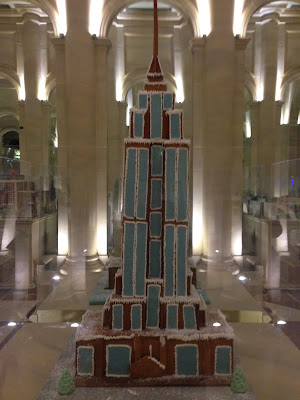 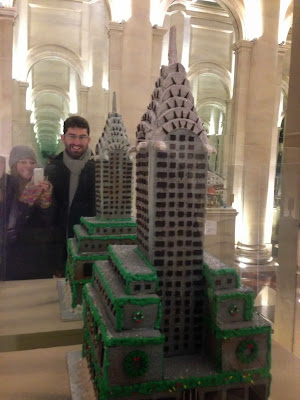 We climbed on benches and sneaked behind barriers to get a better view than the boring rule-followers at the Rockefeller Center tree: 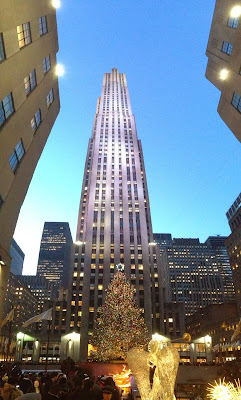 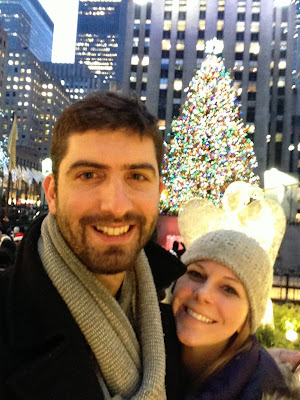 We maneuvered through the crowds and the scaffolding to see the nativity scene in St. Patrick's cathedral. 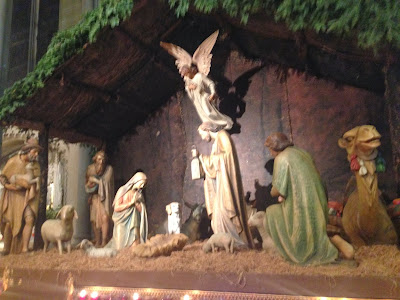 We counted and giggled at falling ice skaters at Bryant Park and hid under the tree to try to scare people. 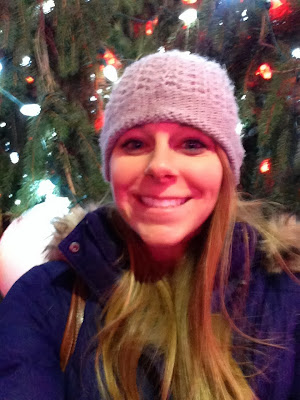 If giggling at people and scaring them isn't getting into the Christmas spirit, I don't know what is.

Philadelphia - Which Cheesesteak Takes the Cake?

While walking through Philly these days, you're bound to see a "Philly's Best Cheesesteak" sign every 15 feet. Even with the abundance of options, MK and I wanted to try the old-school cheesesteak challenge on our trip to Philly last month - Pat's vs. Geno's. These rivals have been directly across the street from each other in South Philly since 1966. Rumor has it the cheesesteak started in the 1930s when a hot dog stand owner started to serve thinly sliced grilled steak with onions on hot dog buns. This owner was Pat Olivieri, founder of Pat's King of Steaks. Provolone cheese was added later to the mix, even though some argue that a "real" Philly cheesesteak these days has to have Cheez Whiz.

Going into this challenge, I assumed the winner would be Pat's. Only one person I asked had recommended Geno's as the best. Geno's had a flashy and overdone exterior with tons of neon lights, so I figured they needed that rather than just depending on a better sandwich. For this reason, I chose the Pat's line to stand in while MK got into the Geno's line. He ended up waiting a little longer than I did because he didn't have cash and had to get out of line to use the ATM (amateur). With my Pat's sandwich hidden in my purse, I strolled on over to Geno's and nabbed us a table. 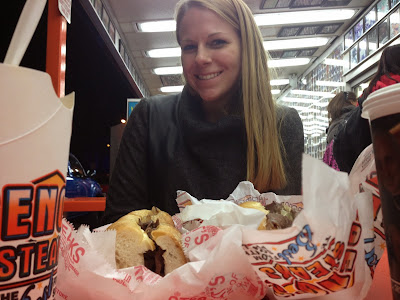 We decided to get the original provolone cheese on our sandwiches and got the exact same order at each establishment. Don't worry, we ordered in the proper way: "provolone wit'" which is Philadelphian for "Hello, sir. How are you? May I please have one cheesesteak sandwich with provolone cheese and onions? Thank you so much! Have a great night!" I practiced ordering in my head for a few minutes in line because I was not going to be told, "No steak for you!" 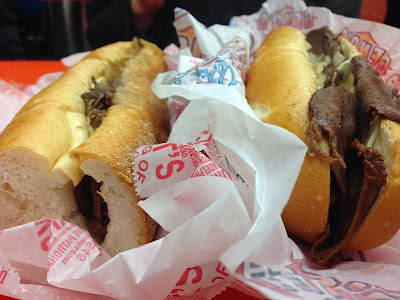 When MK sat down with the Geno's cheesesteak, the Pat's one was a few minutes old. I worried this would affect the test, but it hadn't become soggy or cold, so we persevered. We did a bite for-bite test, analyzing the sandwiches in between sips of soda and dips into the fries we got at Geno's. MK and I agreed, no question about it, that Geno's had provided us with the superior offering. Each component was better - the roll was softer, the meat more seasoned, the onions stronger, and the overall sandwich more flavorful. No real difference in the cheese. We actually left a few bites of the Pat's sandwich in the wrapper to fully focus on Geno's steak. 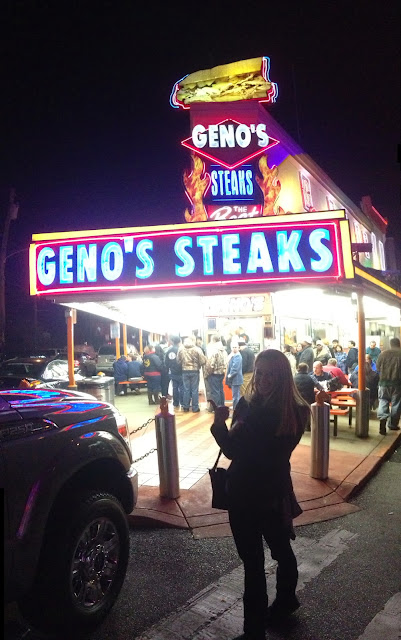 If you have someone to split them with or if you have a larger tummy than I do, go for it and try both cheesesteaks, but I will only be eating Geno's from now on. Another one of my favorite people just moved to Philly last week, so I have a feeling this will not be the end of my cheesesteak experiences there. And it is a fantastic feeling.

Global Bites without the Flights: Philippine Cuisine at Pig and Khao

I started practicing for Thanksgiving (by expanding the capacity of my stomach) weeks ago, meaning that I've had some pretty amazing (and expensive) dinners lately. My training started off at Pig and Khao, former Top Chef contestant Leah Cohen's Asian (mostly Philippines-inspired) restaurant on the Lower East Side. KM (not to be confused with MK) came with me for the sixth installment of "Global Bites without the Flights." 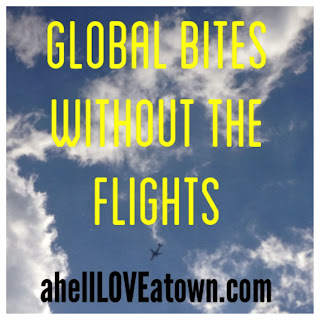 As the name suggests, Pig and Khao is heavy on pork and that was just fine with me (I Like Pig Butts and I Cannot Lie). We decided to do the Chef's 5-course tasting menu instead of having the burden of choosing ourselves, which gave us the added benefit of having some dishes that weren't on the menu. The downside was not always knowing what we were eating. 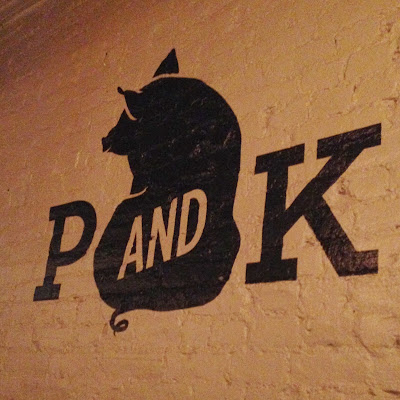 The first item brought to the table was an amuse-bouche, some combination of foods inside a spoon, to be eaten as one. We could not hear the gentleman who dropped it off so we just went for it, not knowing what it was. Both of us noted that it tasted familiar but could not identify the flavors. 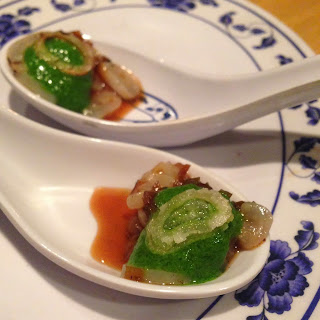 The second item was fried oysters which were very plain and are not on the menu, possibly for that reason. The oysters did not fit in with the rest of the meal, flavor-wise, and it was the only dish we were not impressed with. 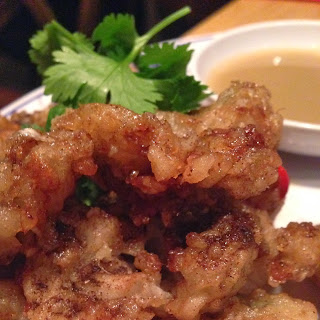 The next dish may have been a variety of the Grilled Pork Jowl on the menu - pig cheeks, with Brussels sprouts, lemongrass, mint, and pork rinds. This was definitely one of our favorites. 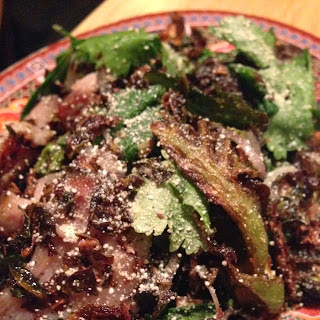 We may not have understood the tasting menu correctly because we thought the next dish was going to be the entree - our fourth dish. This was the Sizzling Sisig, right off the menu - pork head, chili, whole egg - and was my favorite course of the evening. It came out as its name indicates, sizzling and crackling, with an egg in the middle of the plate which we were told to spread out and mix with the pork while the egg fried. It would have made a perfect entree and specialty dish, but then, to our surprise, we were brought out more food. 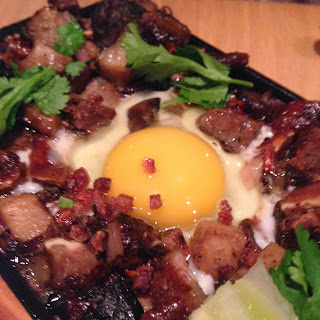 Our actual entree was the menu's Green Rice Crusted Dorade fish, with cockles, chinese sausage, and yuzu dashi, a mandarin-like fruit broth. I typically prefer shellfish to fish fish, but this was a good light white fish, covered in green Rice Krispies to give it a crunch which I didn't expect. 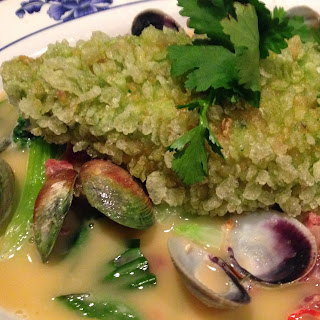 For dessert, a ginormous Halo-Halo was served. It is a traditional Filipino dessert of shaved ice, leche flan, ube (purple yam) ice cream, macapuno (coconut), and pinipig (the crisped rice). We were encouraged to mix it all up into a soup but tried each component individually first. There's no way we could have gotten through even half the bowl after all that pork, but it definitely was delicious and refreshing. 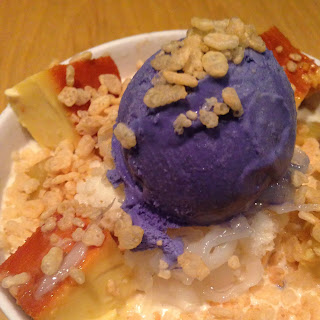 Check out Pig and Khao if you like different pork dishes and huge helpings of ice cream. If you're feeling adventurous, try the tasting menu, you never know what you'll get, and you may even have an unexpected course. Next time I will be ordering the Sizzling Sisig again and will then try their take on the traditional dishes of Pork Belly Adobo and Crispy Pata (pig knuckles).

PS - Help people affected by the recent typhoon in the Philippines here.