While you're reading this post, it's highly recommended that you listen to Bastille's amazing song which I will never get sick of, "Pompeii." {YouTube link}

I have been interested in Pompeii for about 20 years when I received a Kids Discovery magazine with the title. This issue was devoted to the ancient city buried during the eruption of Mt. Vesuvius in 79 AD. I read and reread the Pompeii and Pyramids issues as much as I read my Samantha Parkington books, never expecting to actually explore Pompeii myself one day. But that day did actually come, when my family and I traveled to Italy this past summer. The site is a quick day-trip from Rome and therefore is pretty crowded with tourists, but even with the crowds, this day in July was definitely one of my favorite travel days ever. 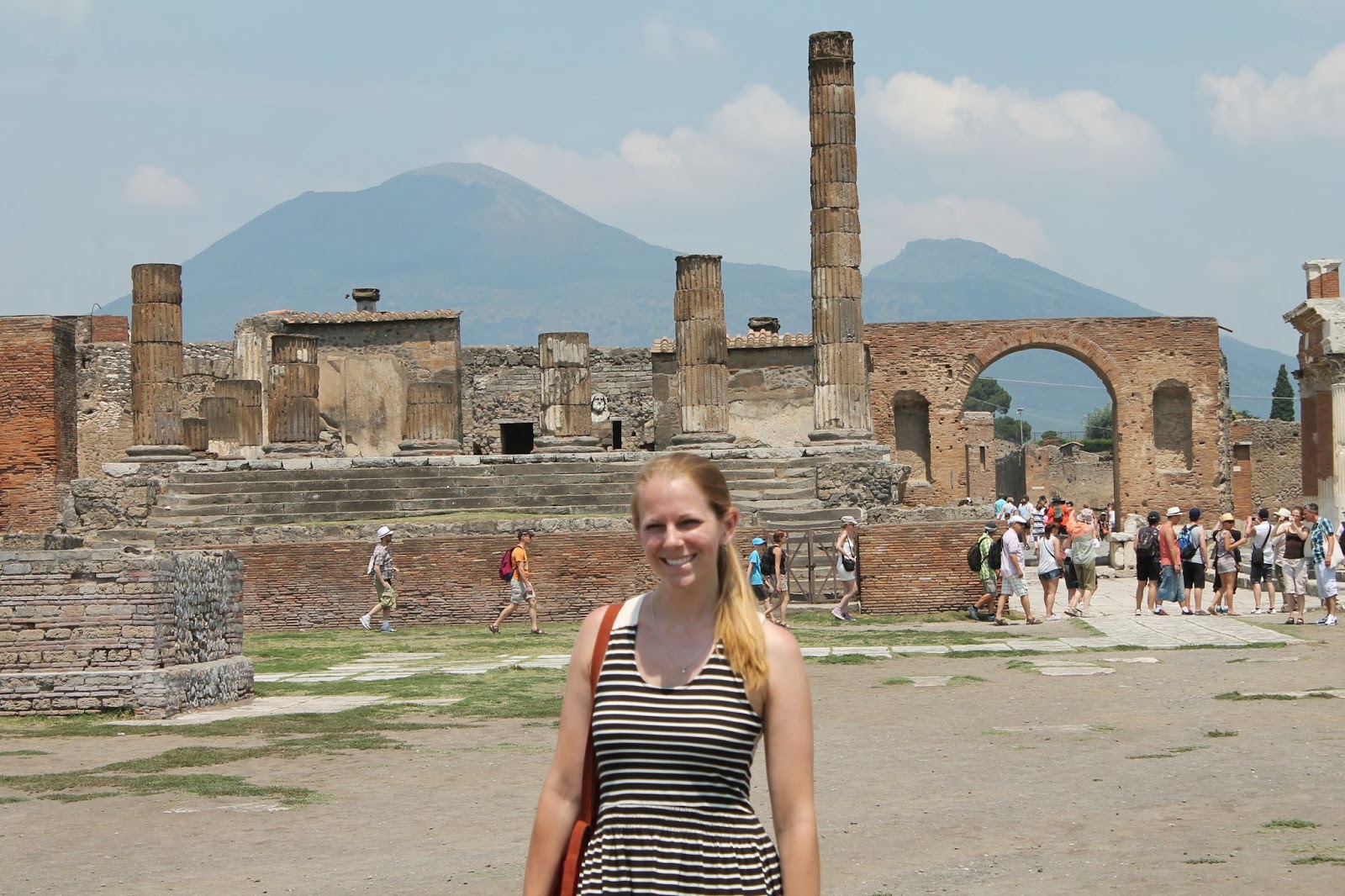 When they started digging up Pompeii in the mid-1700s, archaeologists were delighted at what was found and preserved in the 30 feet of ash from Mt. Vesuvius. It was relatively easy to understand how the people in Pompeii lived, and from this town, we can assume that other Romans lived in similar ways. Pompeii was quite an advanced civilization for something from two-thousand years ago. This place had everything: a city hall, a farmer's market, a courthouse, bakeries, theaters, and public bathhouses with heated floors. 1994-Erin knew about the plumbing, shops, and fast-food restaurants (pictured below). 1994-Erin did *not* know about the brothel complete with a "menu" of scenes painted on the wall (not pictured below). 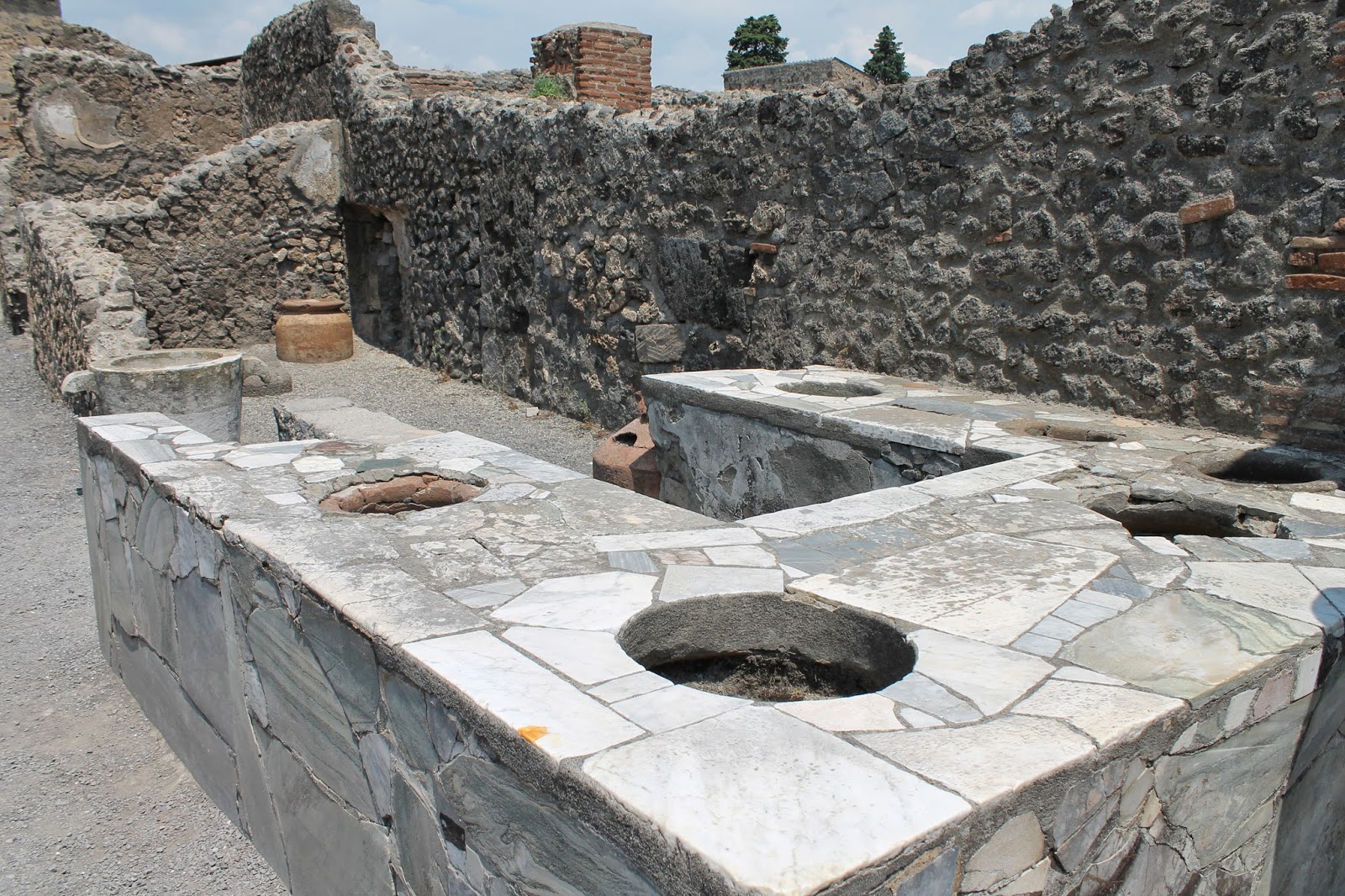 One of the things that impressed me the most were the streets of Pompeii. They were cleaned with water every day and so that people wouldn't ruin their cute Italian sandals, there were stepping stones in the middle of each street. The stones were spaced so that chariots' wheels could still ride the streets easily. Pedestrian walkways had different stones to block chariot traffic. Scattered between the stones were little pieces of white marble which reflect light in the dark and served as ancient street lights. 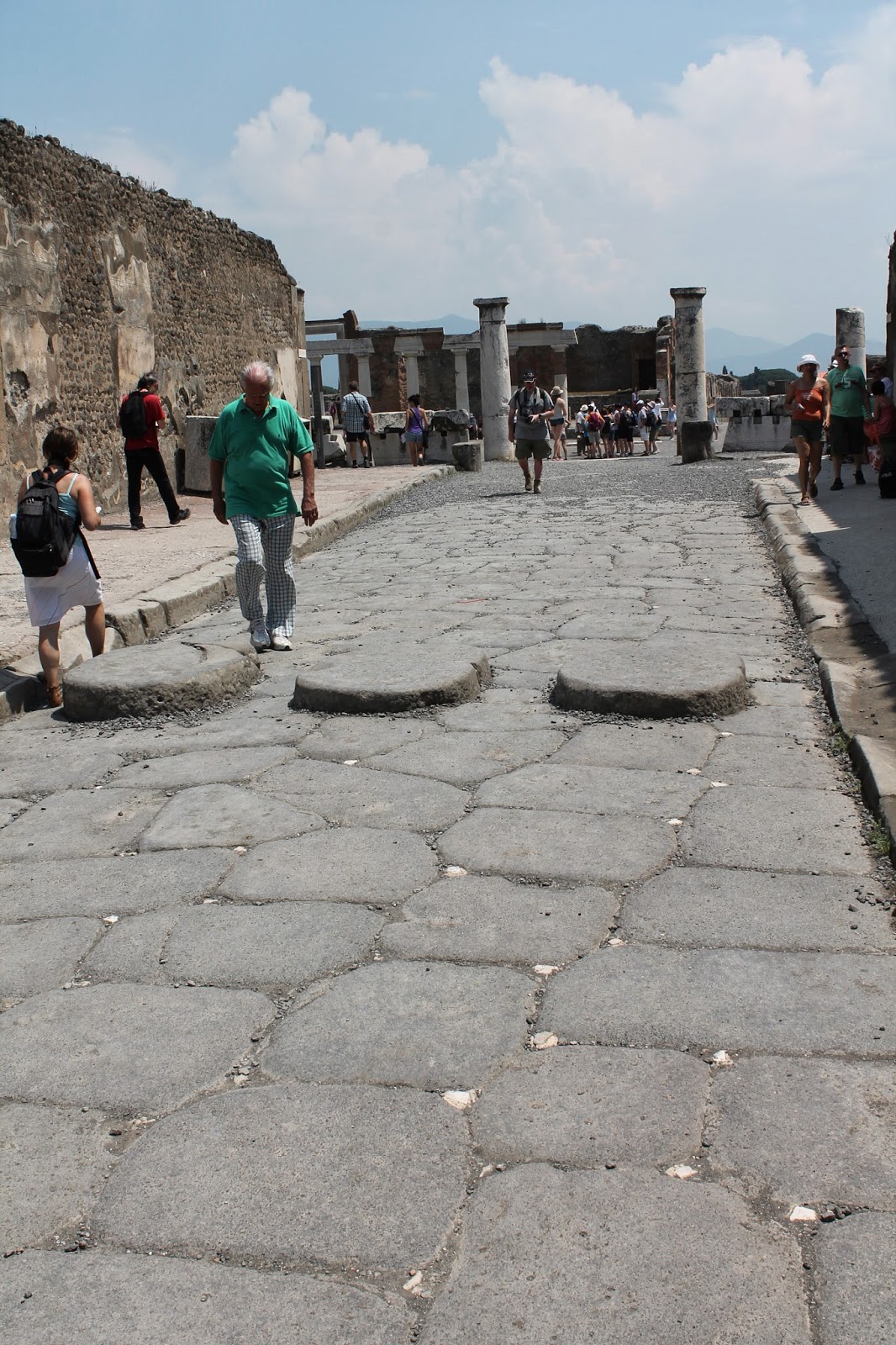 While first wandering around Pompeii, it's easy to get caught up in the mystery of it and forget a little about the travesty that happened. But when you start to see the casts of bodies in their final positions, some with their arms up in an attempt to protect themselves from the ash, it's hard to forget. 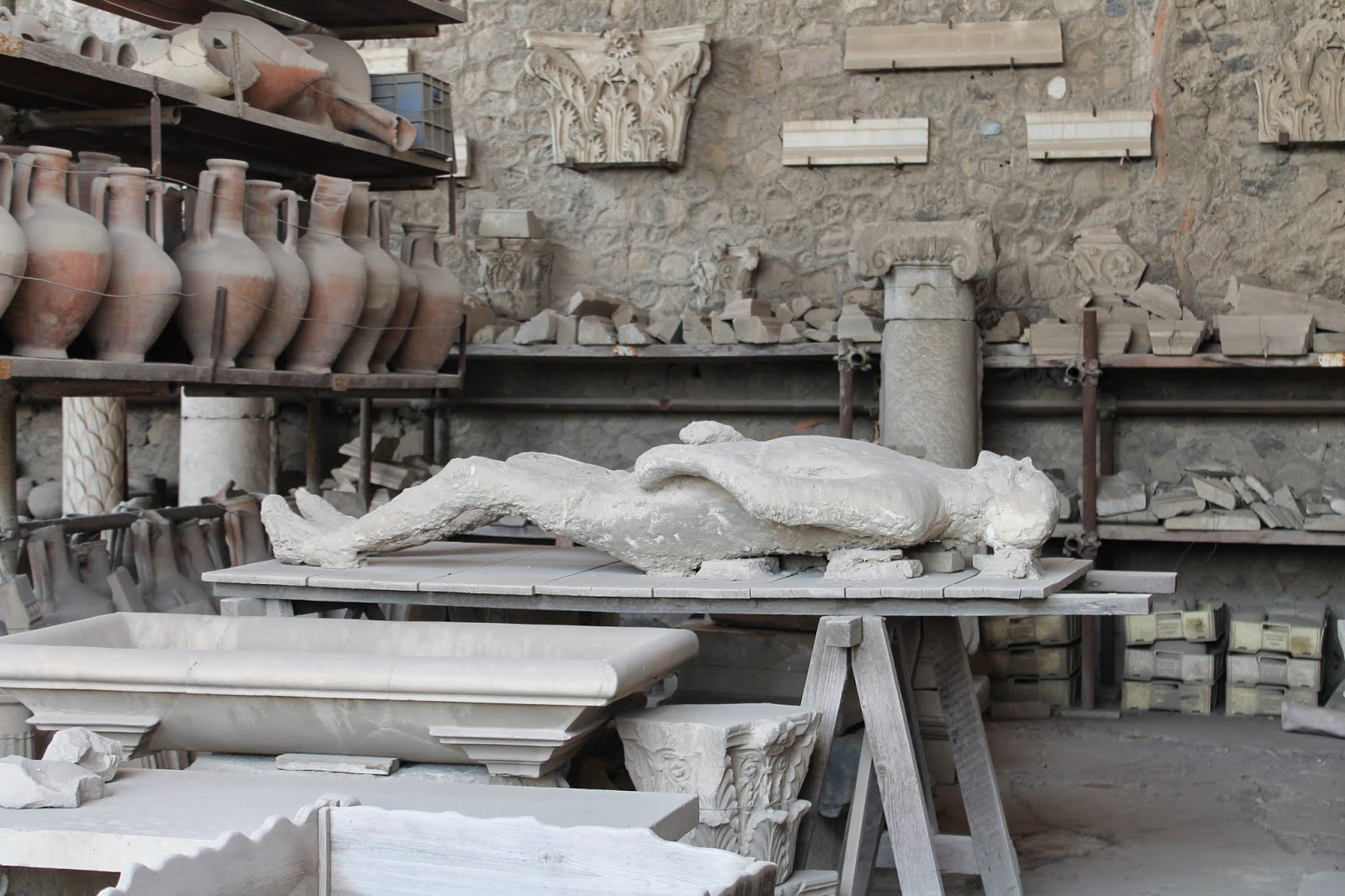 The majority of the relics dug up from Pompeii are actually in the Naples National Archaeological Museum which we did not make it to. Luckily, until April, many items are on exhibit at the Franklin Institute in Philadelphia. Katie, Jess, and I will be going there later this month to check it out. 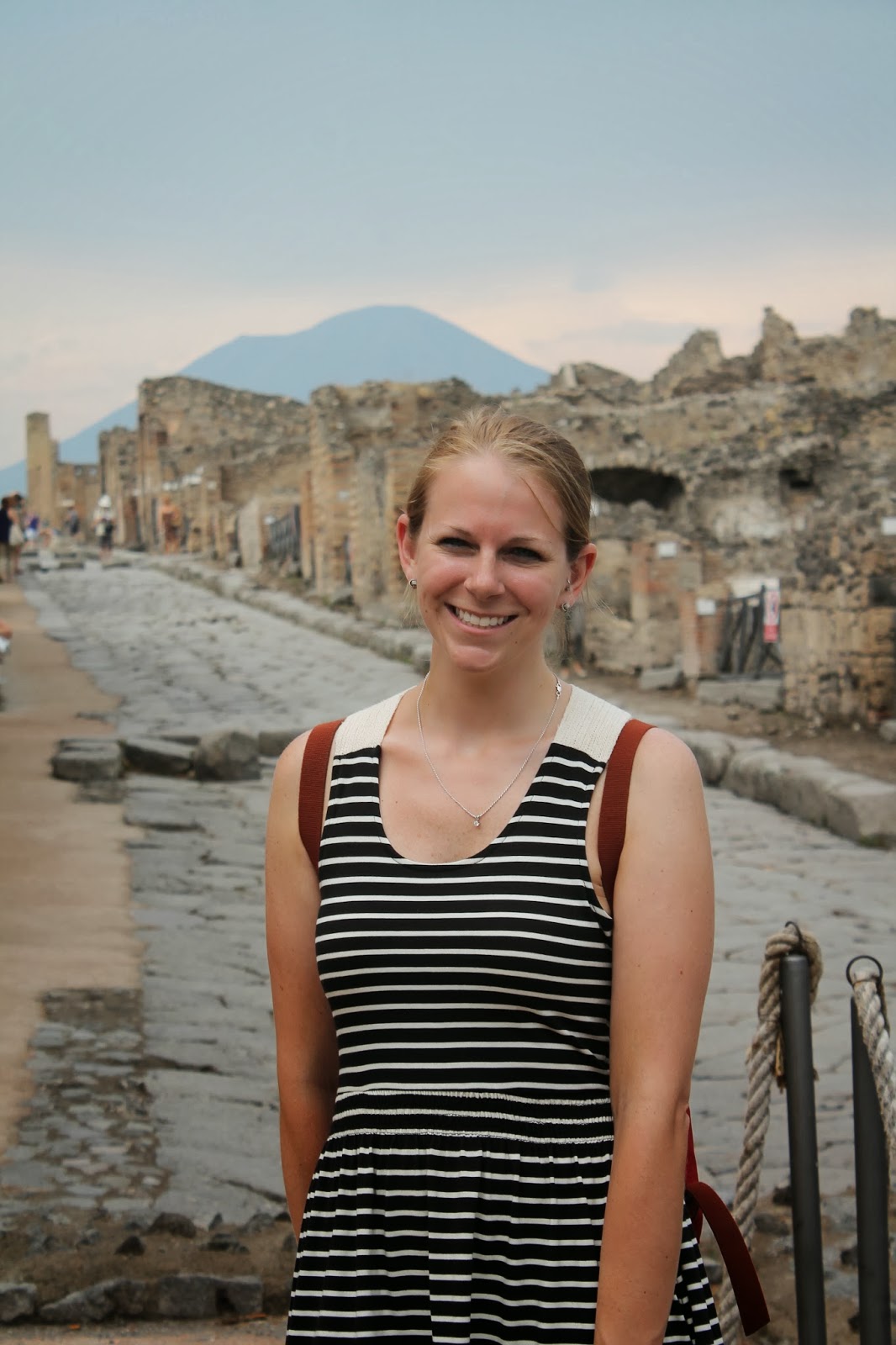 Just as Bastille's song mentions, "it almost (felt) like nothing changed at all," as in, because so many outlines of buildings, wall paintings, streets, and columns were intact, I could easily picture what it was like back in the day. Sure, the people would be wearing sandals and togas instead of shorts and baseball caps. There would be more horses and fewer photos being taken on iPhones. And similarly, I could also actually picture us living there in modern times, provided they install cable.

PS - Thanks to my sister, Katie, for being my personal photographer throughout Italy.