How am I Gonna be an Optimist about This?

Pompeii is having a moment. There was of course, my family's visit to Pompeii, Italy this past summer. There is the amazing Bastille song that I haven't been able to get out of my head for months (not a complaint). There is a Pompeii movie in theaters now and one available on NetFlix. And, there is an exhibit at the Franklin Institute in Philadelphia with relics on loan from the Naples National Archaeological Museum in Naples, Italy.

When MK and I were at the Franklin Institute in the fall, it was originally an idea to check out "One Day in Pompeii" but we couldn't fit it in with our other plans and Cheesesteak taste test. Looking back, I'm glad we didn't go. It was right to wait and see the exhibition with the people with whom I had experienced the real Pompeii. So a few weeks ago, on our "sisters weekend" in Philly, Katie, Jess, and I invited our parents to come up to see "One Day in Pompeii" with us. 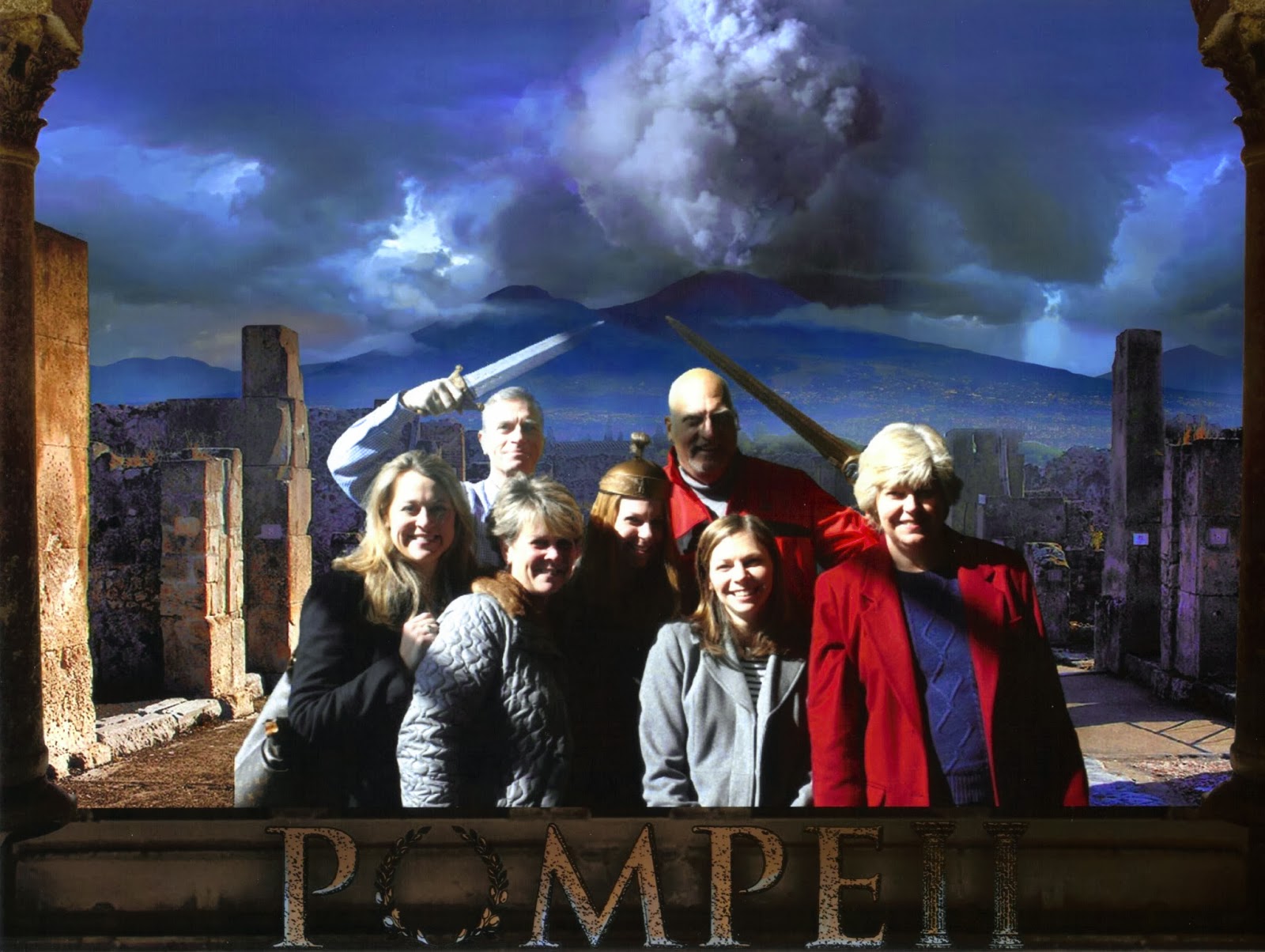 The exhibit was awesome and definitely worth seeing, especially if you've experienced the real Pompeii. There are some copies of statues and mosaics in the city of Pompeii, but most of the original archaeological finds are in the museum in Naples. You can't exactly leave this stuff out in the open.

"One Day in Pompeii" gave a great overview of what life was like before Mount Vesuvius erupted and changed things forever for the city of Pompeii. On display were amazing mosaics, art work, furniture, and more. Videos in various rooms also added color with animated renderings of Pompeii homes, marketplaces, and an explanation of why they built with arches.

I was once again impressed by how Pompeii life was a lot like ours is. Their kitchen tools look like items in my kitchen, although the homeowners in Pompeii had their meals made by slaves and not by Chipotle. Their jewelry could still be wearable today, for any women who, unlike me, are not afraid of statement necklaces. Even their medical tools look similar to what you would see on a dentist's tray today.

After many rooms of artifacts, you walk into a room that shows what Mount Vesuvius and the city of Pompeii looked like the hours before, during, and after the eruption. The floor even simulates tremors. The wall then opens up into the final room of the exhibit, with casts of bodies found trying to protect themselves from the ash.

Just like the body casts in the city of Pompeii, this really brought it back from "this was an amazing civilization" to "this was a horrible tragedy." It makes you wonder, "How am I gonna be an optimist about this" for the rest of the day? But all you have to do is think about how we are now celebrating the Pompeii people as an incredible civilization. I'm sure Pompeii's former residents would be happy to see how much their city was able to teach us about Roman life at that time. And they definitely would be impressed by the city's fame right now in music and movies.