Oh Yeah, I'll Tell You Something

The Beatles played a large role in my upbringing, as I'm sure they did for most of you reading this right now. When I stayed home sick from school, I would beg my dad to let me watch "A Hard Day's Night" or "Help!" over my other options of Laurel & Hardy and The Three Stooges. I locked myself in my room and listened to "Sgt. Pepper's Lonely Hearts Club Band" on loop for years. I adopted "Let It Be" as my mantra. I even did an oil painting of them to update Picasso's "Three Musicians" for a Spanish project one year in school: 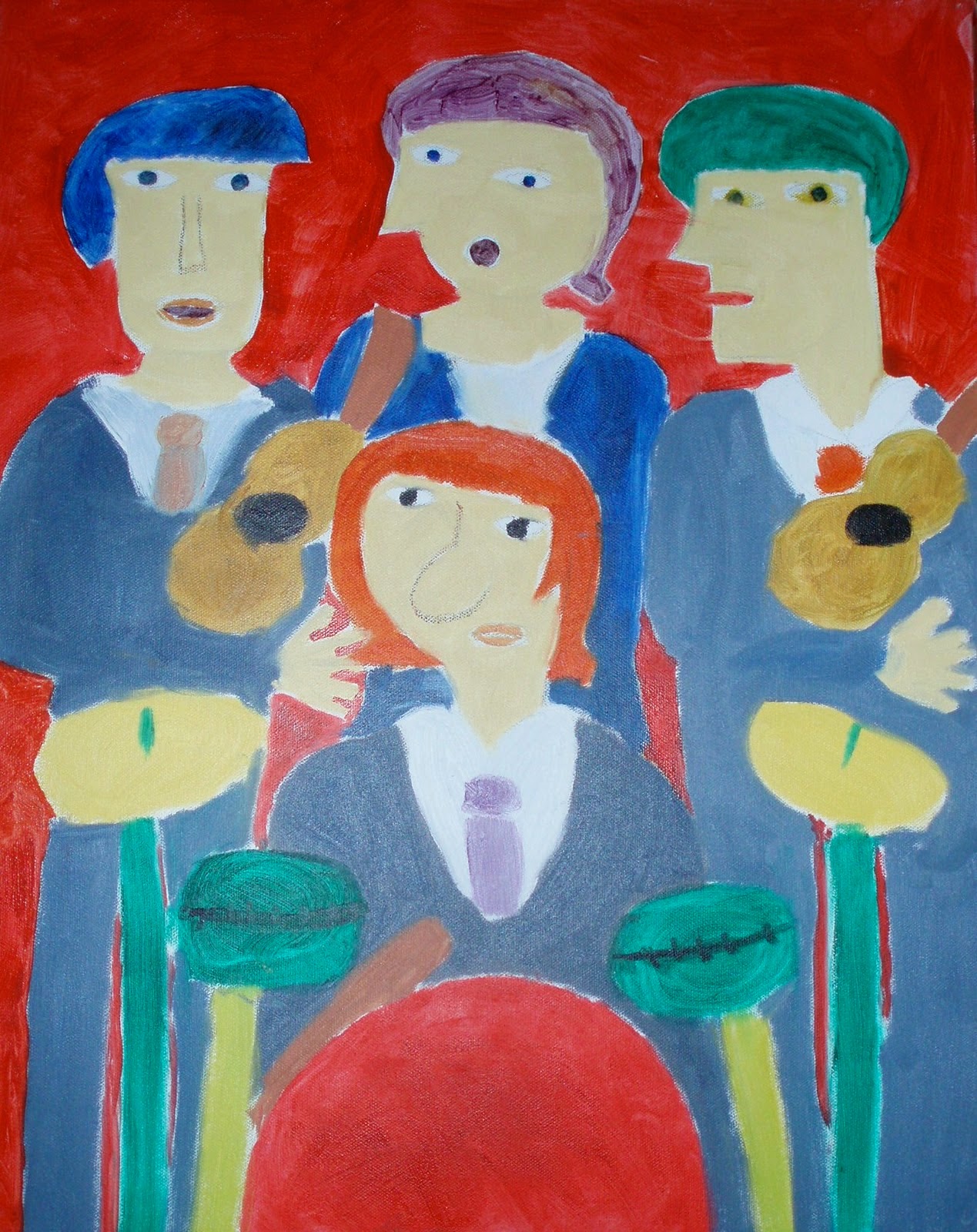 Because of my childhood, it was only natural that I would be dying to see "Ladies and Gentlemen...The Beatles!" - a special exhibit at the New York Public Library of Performing Arts. This exhibit celebrates The Beatles' 50th anniversary of their famous visit to New York in 1964 when they performed on the Ed Sullivan Show and captured our hearts. The exhibit is open until May 10th and free to all visitors. When my parents came up to visit this weekend, we went up to Lincoln Center with my frousin Christie to go check it out. 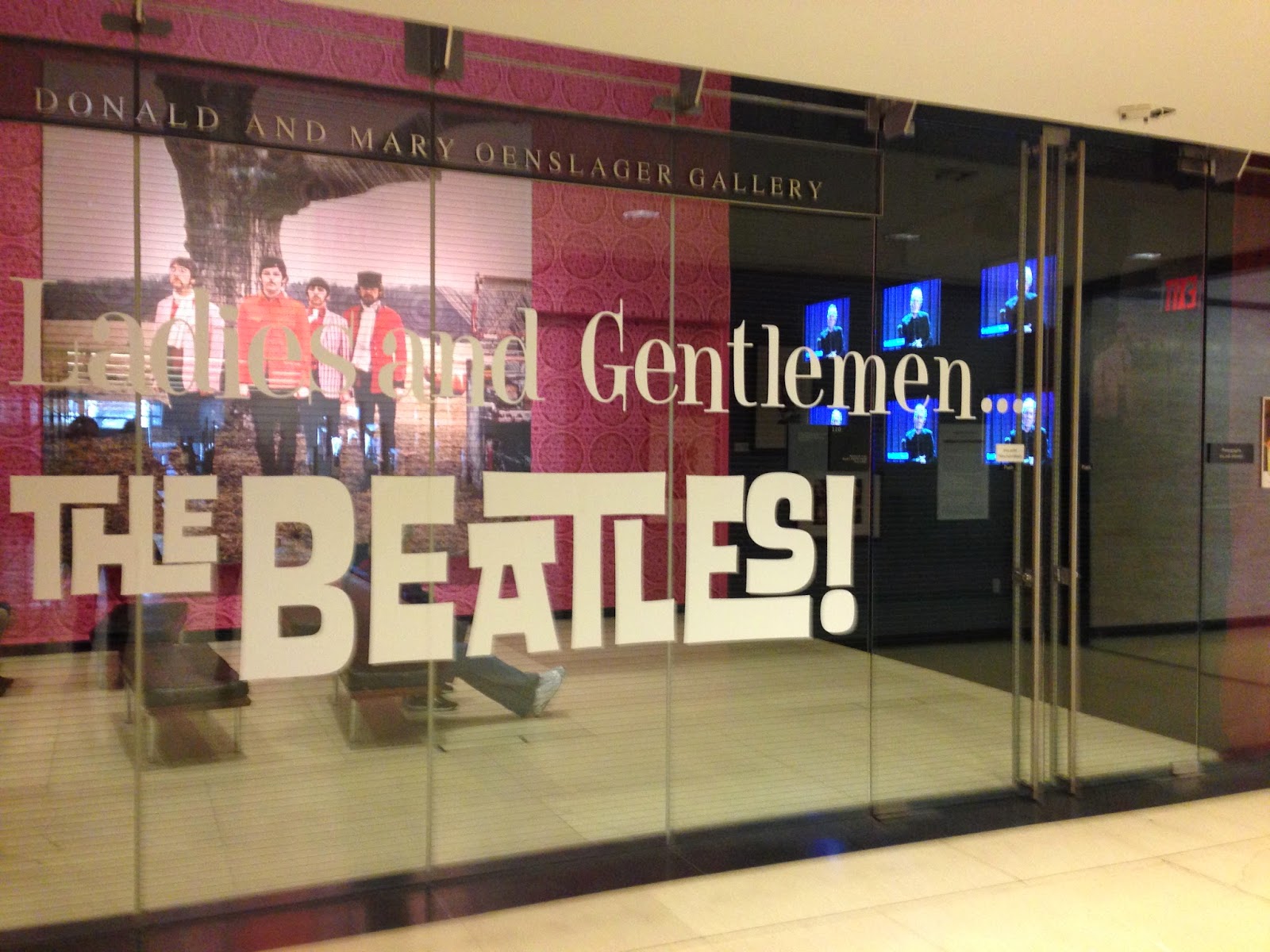 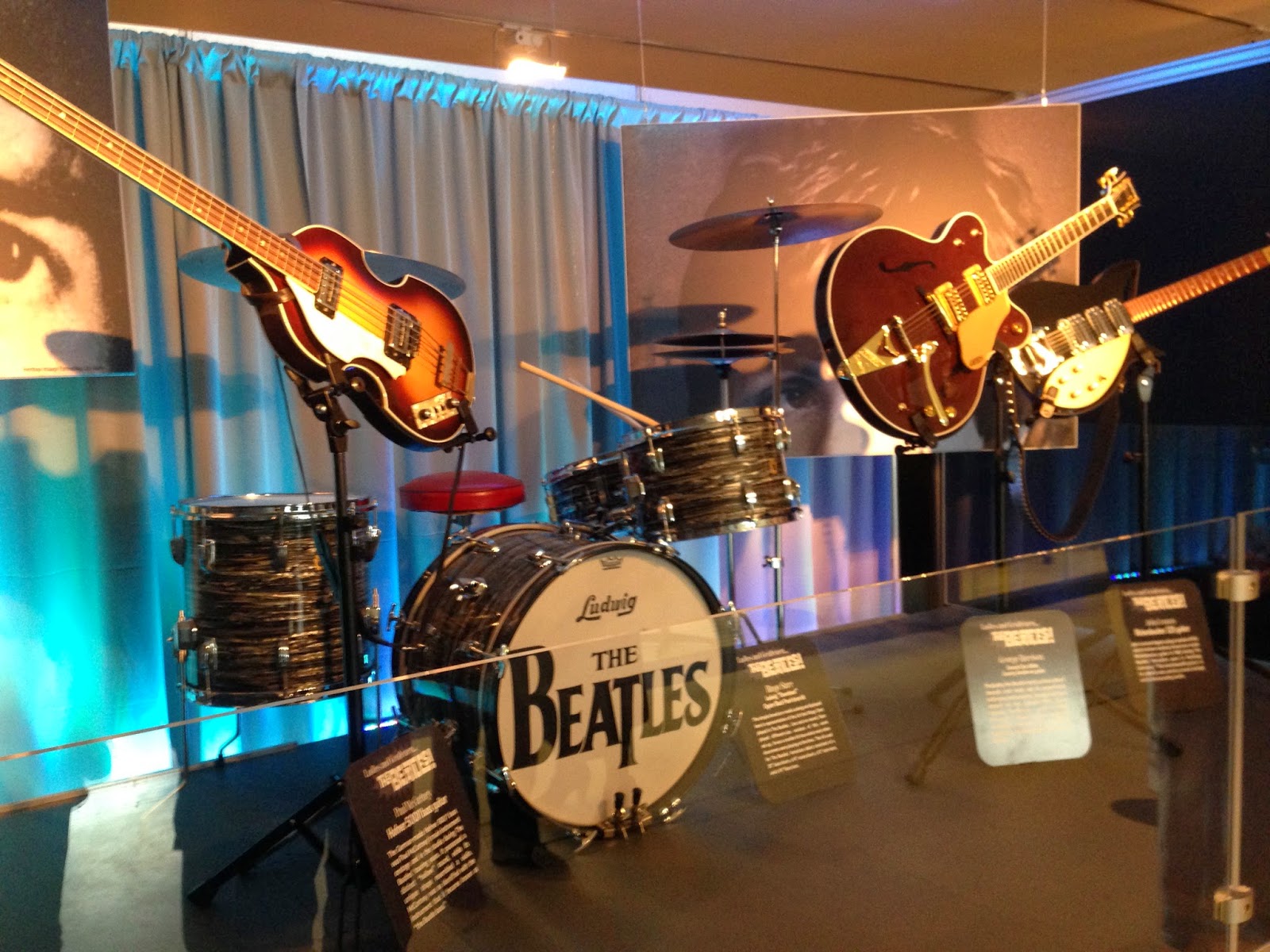 If you are a Beatles fan, this is a can't-miss stop in NYC. There is a ridiculous amount of memorabilia and history to be found here - the band's signature instruments, biography sheets for each band member that were sent to radio stations, setlists, contracts for concert venues, newspapers, outfits worn, tickets for concerts which ranged from $4 to $6 - the list goes on. I got a kick out of seeing that sometimes when answering fan mail, a band member would take a pile and respond to letters, sign them, and then forge the other band members' signatures. I found the display of a typical fan's bedroom in the 1960s quite interesting, as well as some of the creepy Beatles products that were sold to America's youth. 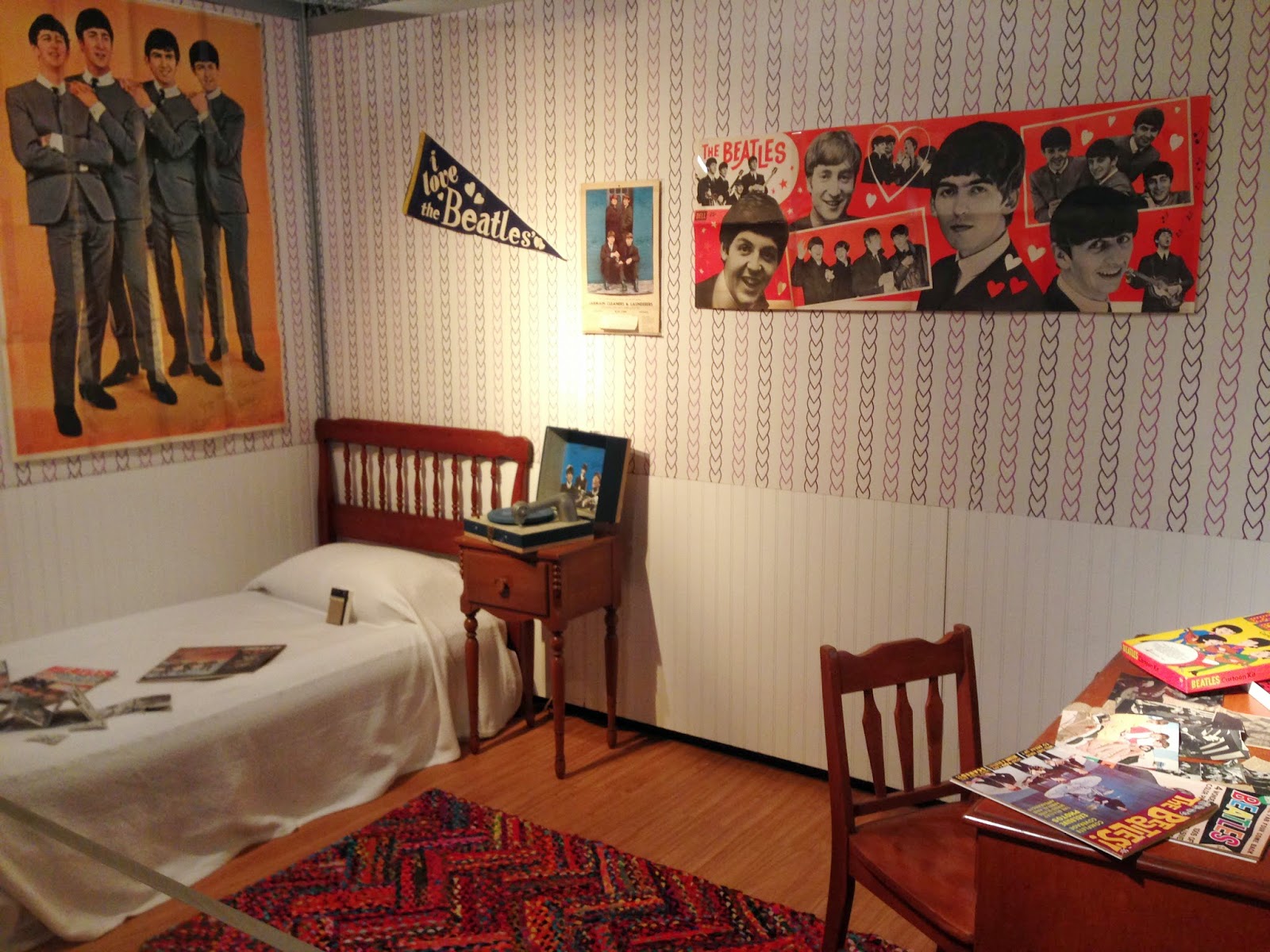 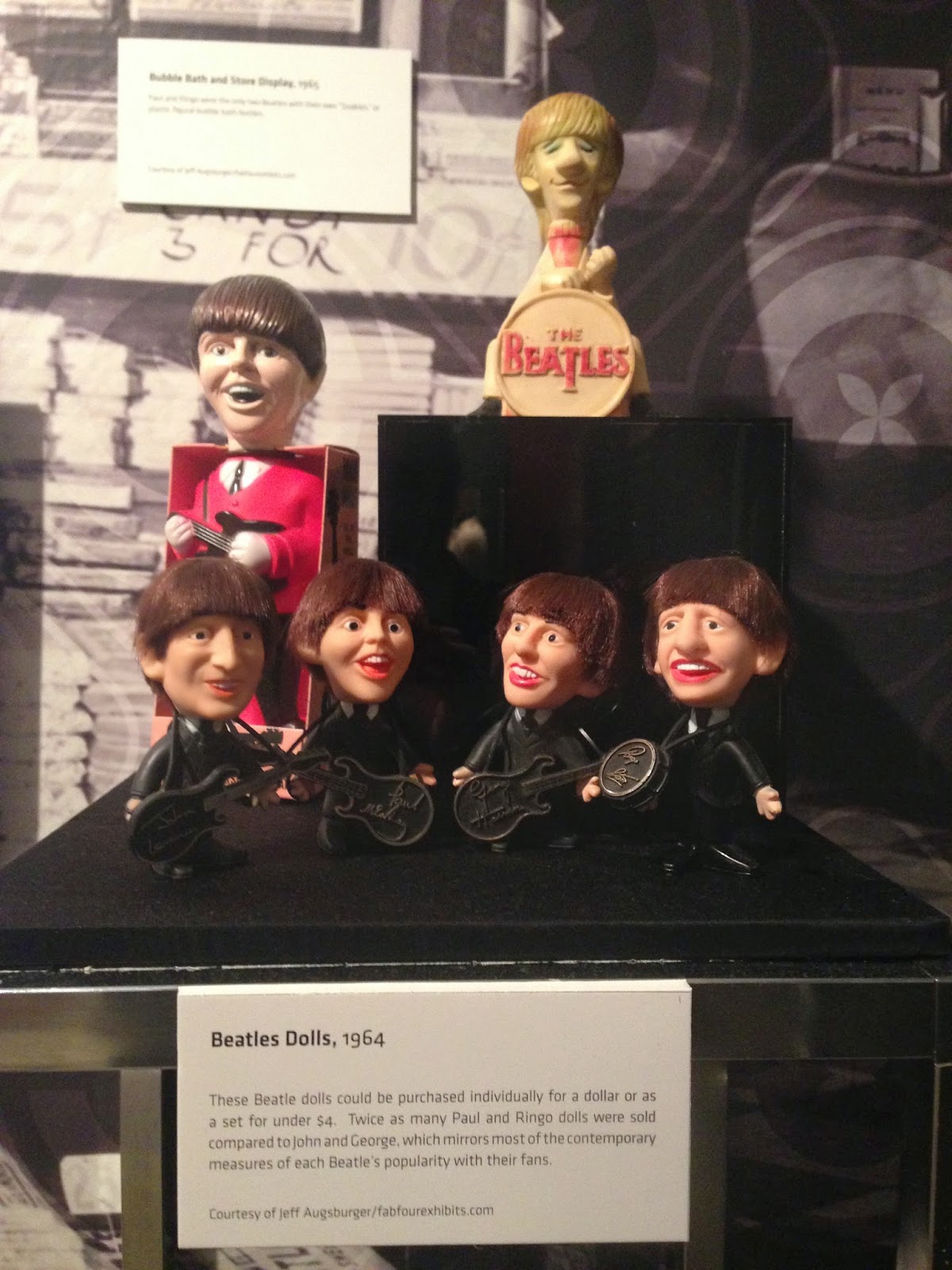 The exhibit also touches upon some of musicians who influenced The Beatles and has guitars on display from Buddy Holly and Elvis. There are interactive displays of instruments used back in the day when skiffle music was popular, so Christie, Dad, and I decided to jam a little bit. 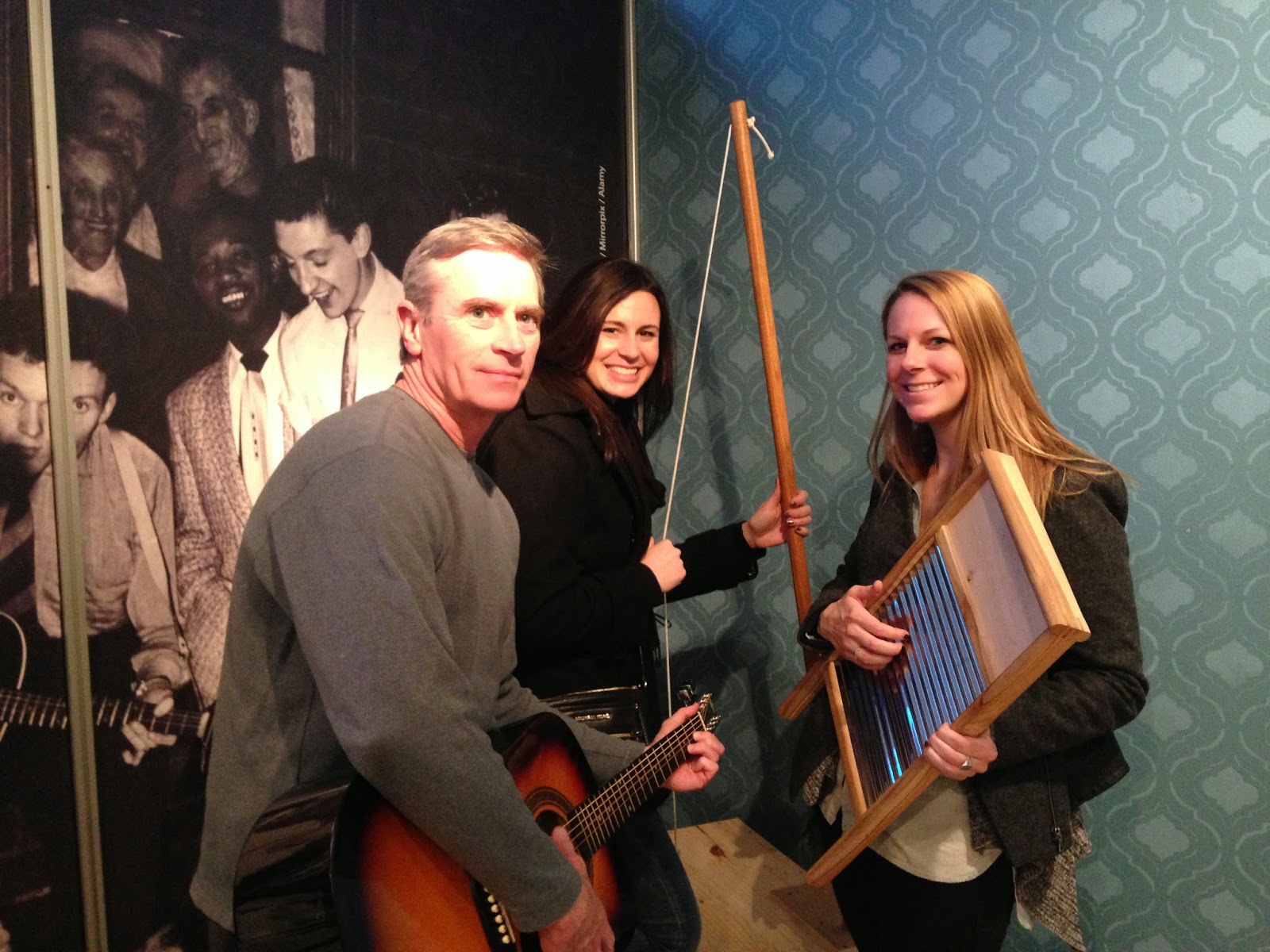 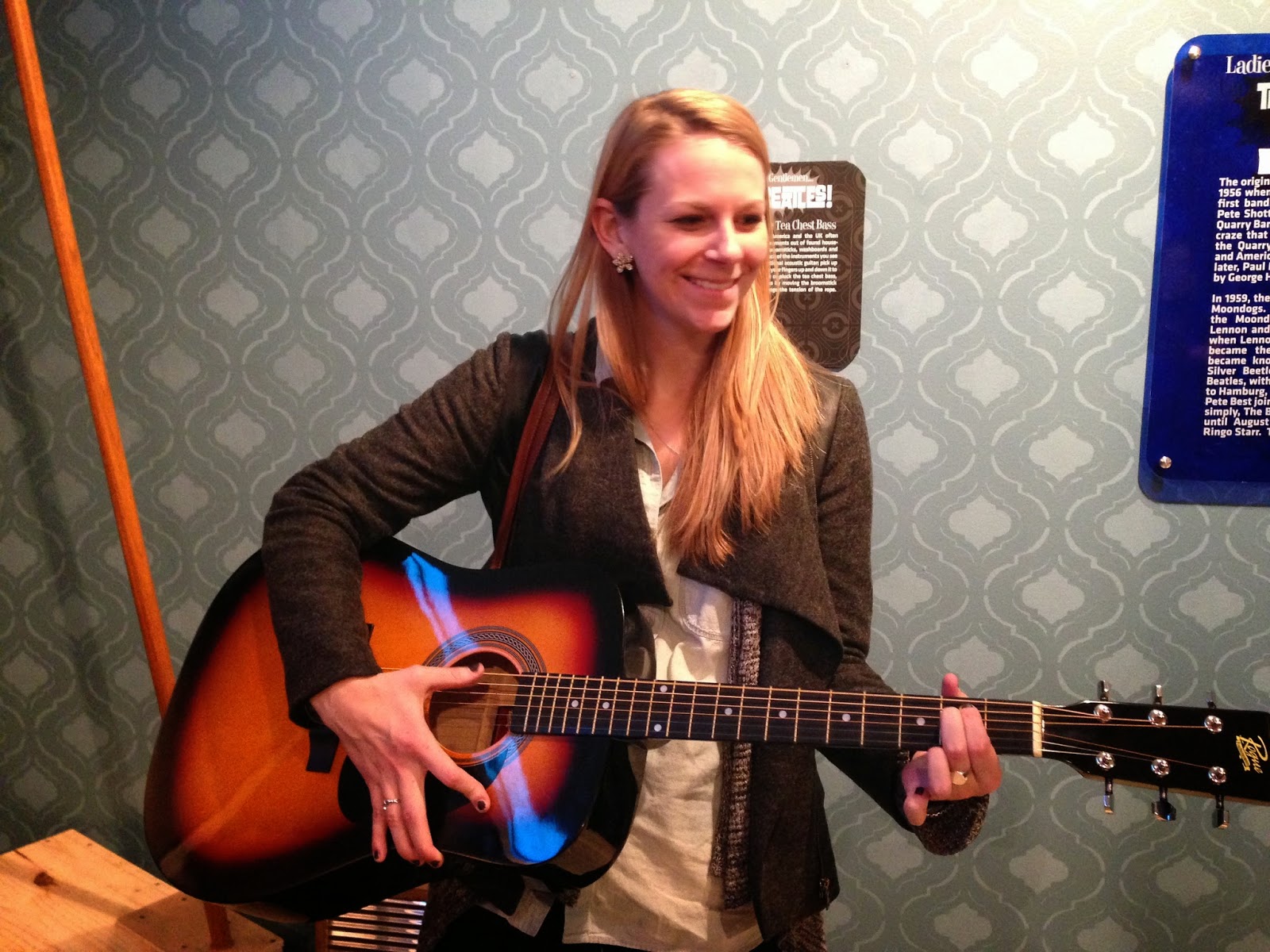 I learned a lot in this exhibit that I hadn't known before about the Fab Four. For example, there was a Detroit movement to "Stamp Out the Beatles." The band members got their hands on a few sweatshirts that advertised the movement and wore them in public as a joke. 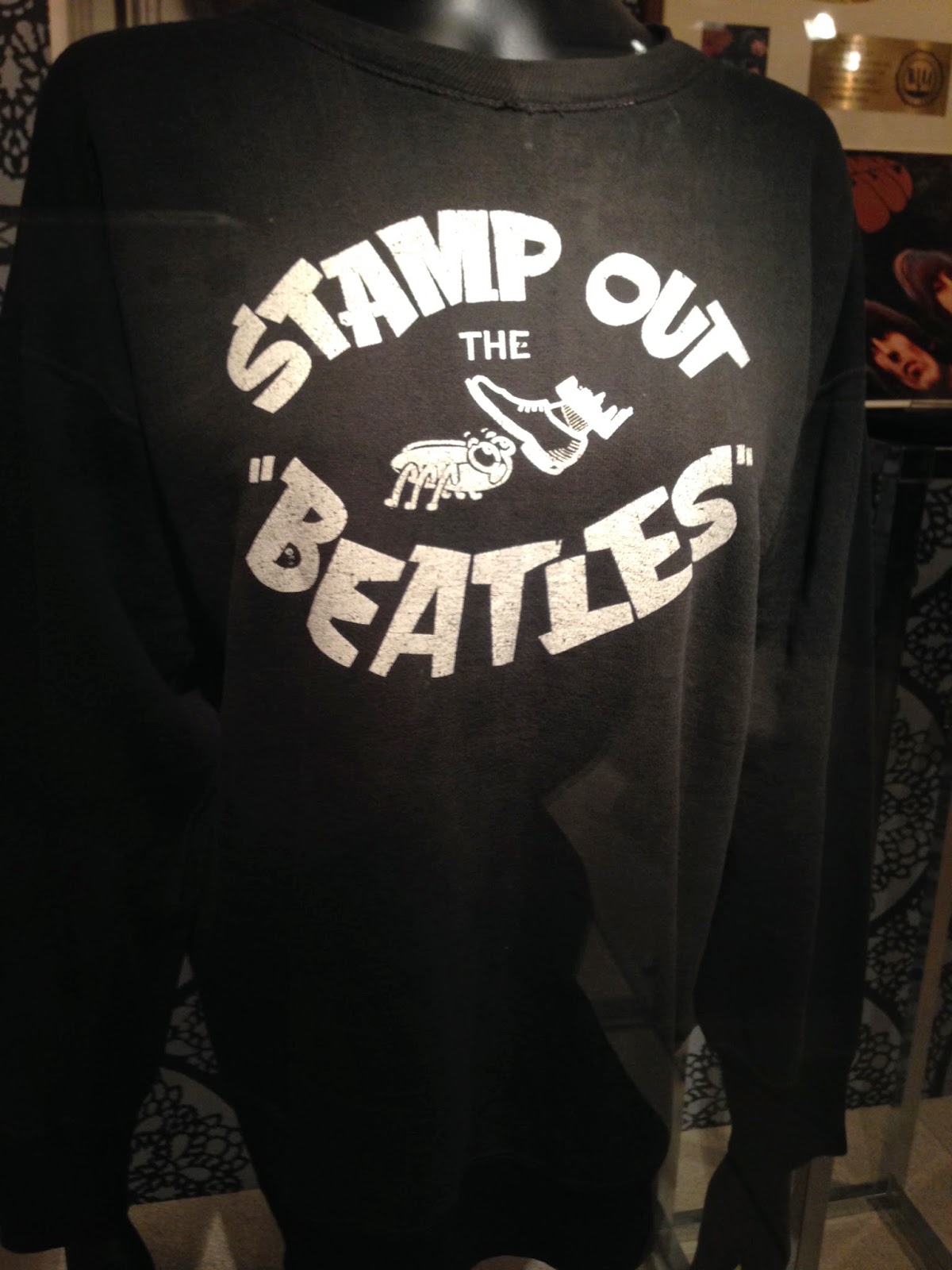 Something I'd had no idea about was that The Beatles wanted to release "Yesterday and Today" with a quite gruesome cover featuring bloody baby dolls. This was understandably controversial so they were forced to release their album with a more wholesome album cover instead. My dad said that this was the reason they later released "The White Album" with no cover at all, in protest. 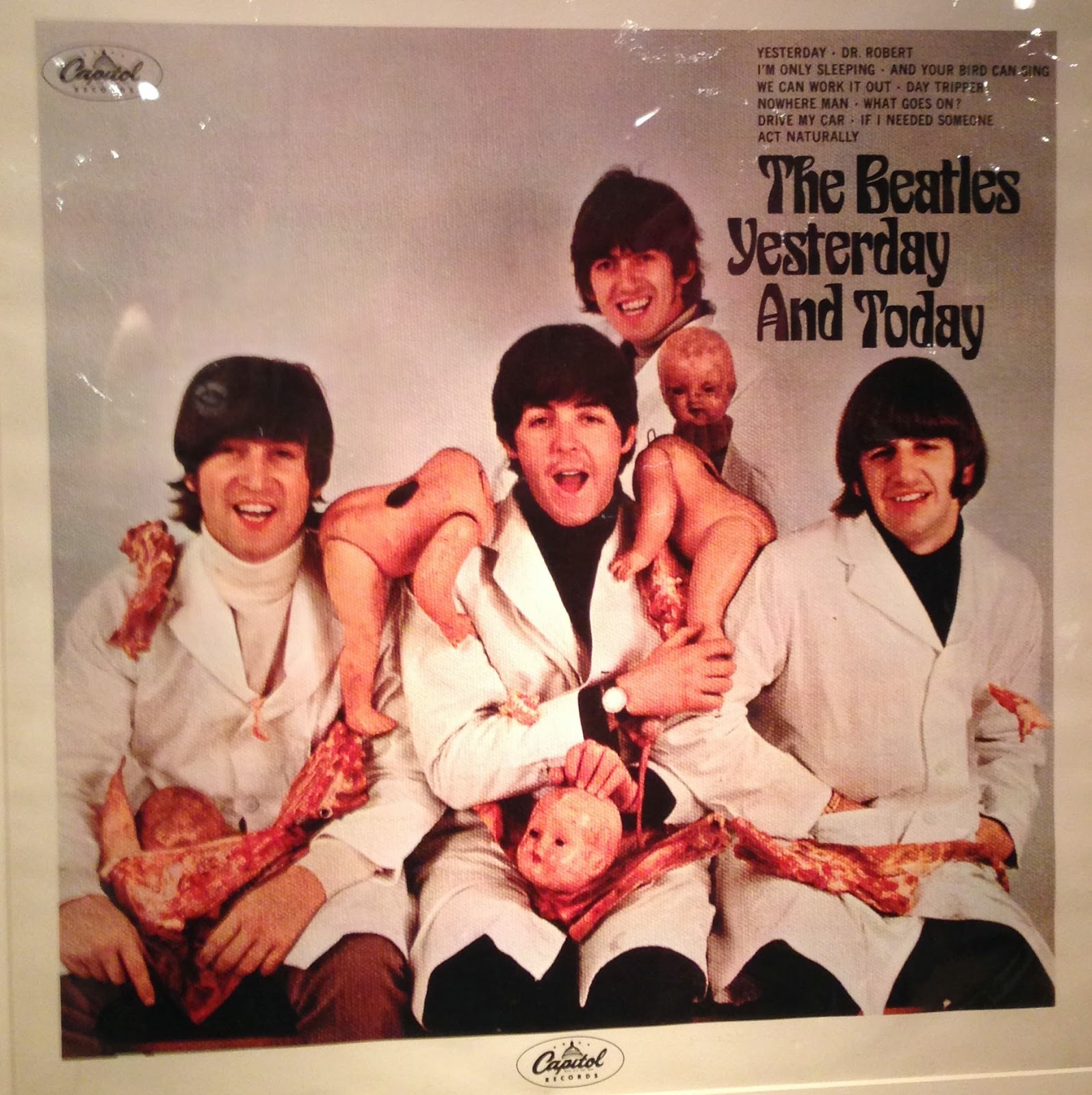 At the end of the exhibit, there is the opportunity to record your own experience being a Beatles fan. You can also watch videos of how other musicians were influenced by the Beatles. But the coolest part was that they have a setup to receive a drum lesson from Ringo Starr himself (via video of course). The only problem was that one of the drumsticks was missing so I definitely didn't sound as awesome as I should have. 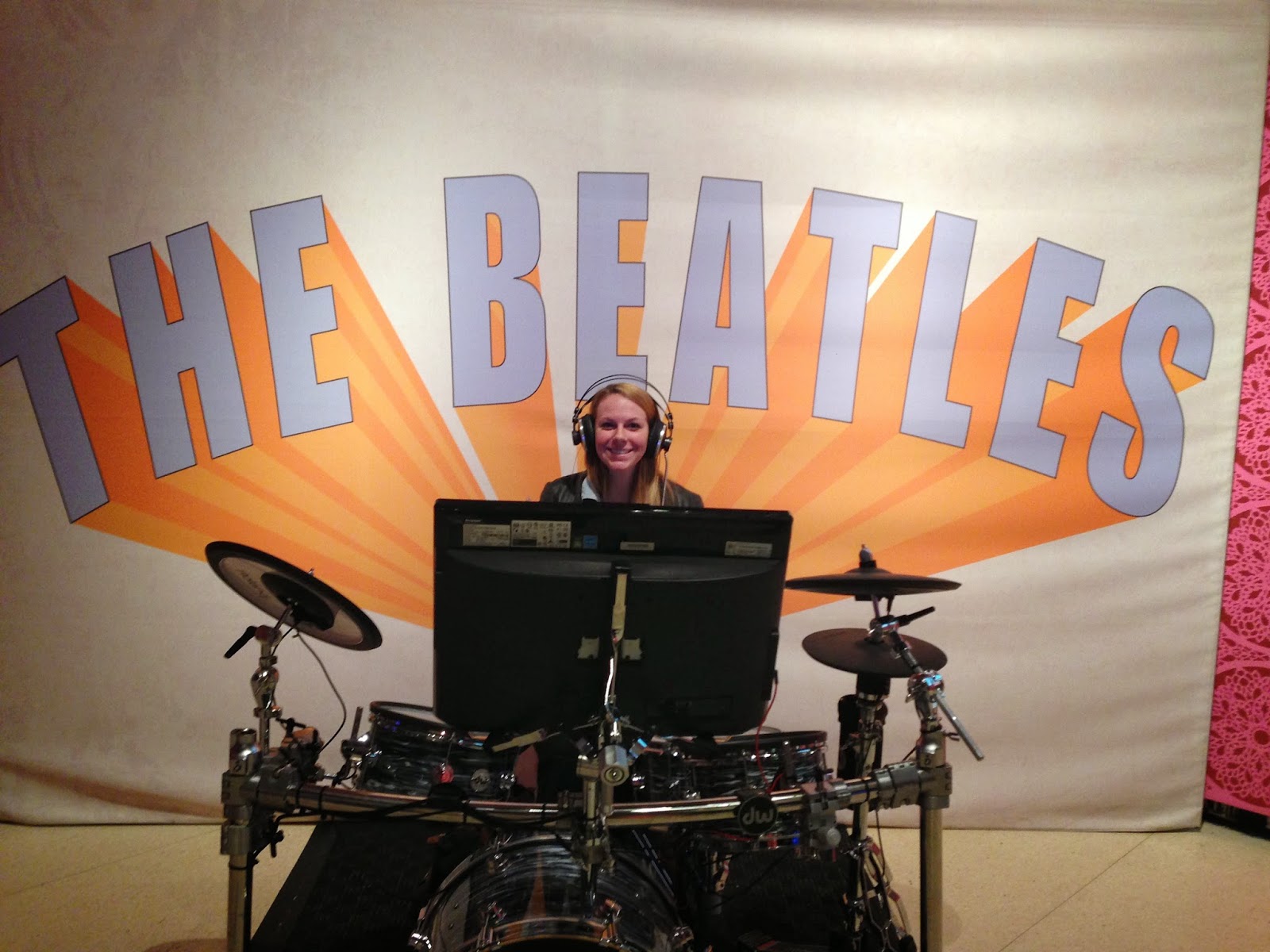 We did think it was a little odd that the exhibit covered only a small period of time of Beatles' history. Of course, if it had gotten into everything that came after - Yoko, John's death, "Simply Having a Wonderful Christmas Time" - you'd need "Eight Days a Week" to see it all.