This 'Hood Was Made For Walkin'

When I first moved to Jersey City and later, New York City, I spent many a night on the Lower East Side in crowded dark bars, feeling out of place because I wasn't wearing heels and my dress actually covered my behind. Nowadays, I prefer the Lower East Side during the day, especially after a recent tour that my sister, Katie, and I took with Jeff from Walks of New York.

The Lower East Side historically has been where many immigrants have settled, from the Irish and the Poles (maybe even some of my relatives) to the predominantly Jewish community in the 1800s/1900s and even into today, with the growing Chinese population over the last few decades. If you look past the nightclubs and the orange cones of constant construction, you can see traces of immigrant influence everywhere.

Jeff was an incredible host and gave us tons of historical tidbits, which you should really go on the tour to learn. Some of the discussions I found the most interesting were regarding the push-cart market economy, the tenement building conditions, and the Triangle Shirtwaist Factory fire. Jeff had great visual aids as well - maps, photos, and diagrams of buildings - including one that looks suspiciously like my current apartment building. We talked about how my building must have been a tenement since it has an odd "dumbbell" shape with a small courtyard in the middle of the building to give more light to make apartments more livable. These types of apartments started popping up once people saw how bad living conditions had become in the late 1800s, sometimes having 10 people living in one dark dangerous room.

A definite highlight of the tour was when we visited Kehila Kedosha Janina, the only Romaniote synagogue in the Western Hemisphere. Jeff let an adorable older gentleman at the synagogue take the reins here. This gentleman had been a member of the church since he came over to America from Greece in the 1950s. He told us all about the history of the congregation, about the building (virtually unchanged since 1927), and then showed us the scrolls of many Torahs. This was definitely a unique experience and something I wouldn't have necessarily thought to do without the tour. 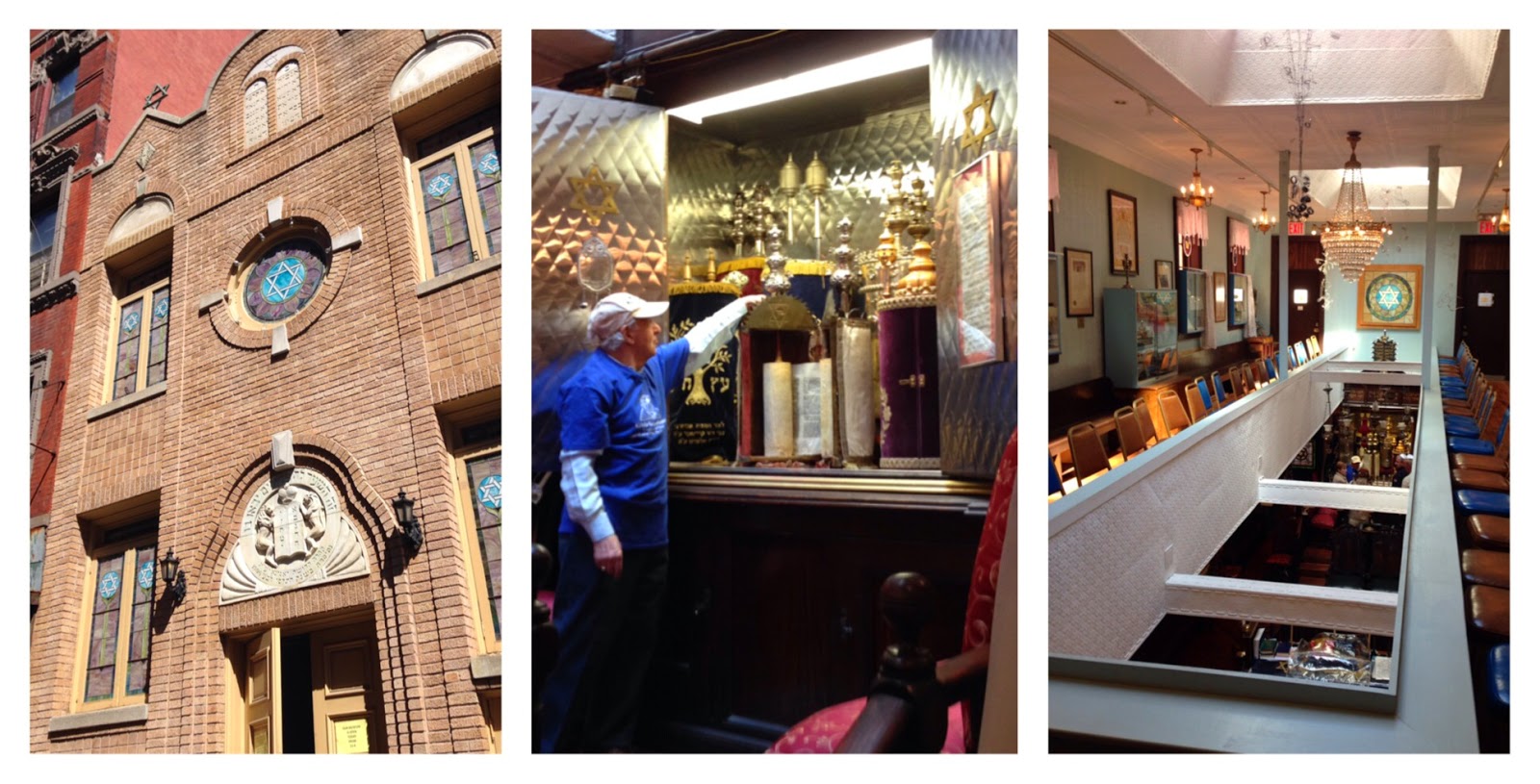 During the day, we also stopped at three classic food establishments.

At Kossar's Bialys, we each were given a piping-hot-from-the-oven bialy, a precursor to the bagel. These delights are like if only the top half of a bagel had the hole and then that hole was filled with fresh onions or garlic. I eat, maybe, five or six bagels a week, so I am surprised that I had no idea about these until a few weeks ago. Kossar's has been around since 1936 and the operation appears to have not changed since then. It is minimalism at its best.

At some point, there were around 80 pickle shops on the Lower East Side. Jeff had our tour sample sour and 1/2 sour pickles at one of the sole surviving shops, The Pickle Guys. I knew that you could pickle other items aside from cucumbers, but I didn't realize how far you could go with that - watermelon, pineapple, garlic, you name it. Peter Piper would have loved it. There was also a dude out front grinding up roots to make fresh horseradish for Passover.

The last stop was at Russ & Daughters, a place Aubrey and I discovered a few years ago that has been around since 1914. Jeff went in and got some chocolate Babka for us. Babka reminds Katie and me of my grandfather on my mom's side, but neither of us had ever had it in chocolate so that was a special treat.

In fact, this whole tour was a special treat. I always encourage people to go out there and be tourists in their own zip codes and I can't imagine a better way to get to know this amazing neighborhood than to walk with Walks of New York. Unless you actually enjoy wearing heels and short dresses.